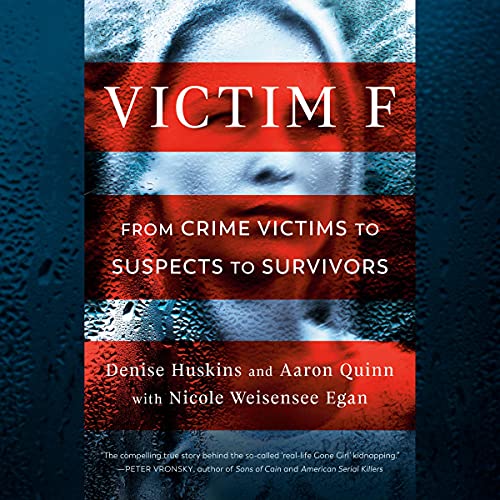 The shocking true story of a bizarre kidnapping and the victims' re-victimization by the justice system.

In March 2015, Denise Huskins and her boyfriend, Aaron Quinn, awoke from a sound sleep into a nightmare. Armed men bound and drugged them, then abducted Denise. Warned not to call the police or Denise would be killed, Aaron agonized about what to do. Finally he put his trust in law enforcement and dialed 911. But instead of searching for Denise, the police accused Aaron of her murder. His story, they told him, was just unbelievable. When Denise was released alive, the police turned their fire on her, dubbing her the “real-life ‘Gone Girl’” who had faked her own kidnapping.

In Victim F, Aaron and Denise recount the horrific ordeal that almost cost them everything. Like too many victims of sexual violence, they were dismissed, disbelieved, and dragged through the mud. With no one to rely on except each other, they took on the victim blaming, harassment, misogyny, and abuse of power running rife in the criminal justice system. Their story is, in the end, a love story, but one that sheds necessary light on sexual assault and the abuse by law enforcement that all too frequently compounds crime victims’ suffering.

What listeners say about Victim F

You're not just survivors, you're both warriors, who deserve a hell of alot more respect and compensation. May your future be filled with love, safety and contentment. Virtual hugs for you both, as I yearned to reach out many times while listening.

I am so saddened for you both!!

I would like to apologize to you both on behalf of society. Society failed you both in so many screwed up ways. I had never heard of your case before seeing the episode of 20/20. I write my review to you both. I know that it seems that the entire world was full of bad people but not everyone is like this. There are a few good people out there. I feel so bad to both of you! Thank you for sharing your story! I can't even describe how sad and astonishing your story is! I'm glad you made this book and I hope it is through stories such as this that we can fix the severe cop problems in our world! Speechless! Your story leaves me speechless. How anyone could ever treat you both this way? I hope that you both will be able to live out the rest of your lives as happy as possible despite all of this awful trama. Your story will always be in the back of my mind. I am so sorry you guys had to experience this : (

When previewing the book I did not realize it was a true story, I only knew it was narrated by Brittany Presley. The book could easily be under the horror genre after hearing what these two very brave individuals went through. I also appreciated that Aaron pointed out that not all police officers, nor justice systems are bad. Unfortunately in today’s world, true criminals do have more rights than victims and sometimes the true criminals are part of our justice system. Thank you both for sharing your story, I wish your family all the happiness!!

A magnificent told story of the horrible event

As Denise and Aaron explain in their book, what would you do if the police who are sworn to protect you are determined that you are guilty of a crime you were actually the victim of? Luckily for Denice and Aaron a separate police department solved the crime and the rest is history, or is it? Unfortunately for Denice and Aaron the horrific tragedy will not ever just be in the past and my heart goes out to them.

This is a must read or a must listen to book that will I believe every one should learn from. Listen to this audio book and learn “never talk to the police unless you have a lawyer present”!

I thought I would like this story bc I like “real life” crime. This story is a real story. The story is way toooooooo long.

This is a story that needs to be told and heard. The crime is total insanity, but the way the police handled the victims of that crime is somehow worse in many ways. It’s disgusting. At one point they have people reading the online comments directed at Denise and it’s terrifying to know that these are our neighbors. Denise and Aaron are inspirational in so many ways. The strength and grace in which they handled themselves is simply astounding.

In great need of an editor

Much too much extraneous detail. Plodding, whiny, self-involved. Less than an hour into their story, I just don't care what happens to them. Does what happened to him or his brother in elementary school really matter? Or why she chooses to wear a dress rather than slacks on a date?

This is a true travesty and miscarriage of justice. Glad they were compensated.
The narrations are over the top and looses its impact halfway through the book.
Would have preferred the straight facts

This was a great true crime book. Written from the perspective of both the victims made the series of events easy to follow. The narration was also fantastic- for both voices. I didn’t know anything about this case before I started the book which made it even more gripping.

I support Denise and Aaron

Denise and Aaron, I support you completely and I am terribly sorry you went through this. Thank you for sharing your story.

Makes you question some police departments and cry for victims.

This book will make you so furious at how two victims of a terrifying crime were treated by the Vallejo California police department. This Police Department decided within 48 hours that the boyfriend had killed his girlfriend and then when she turned up released by kidnappers they called her a Hokester and a fake … a Gone Girl. It’s amazing that they survived mentally intact and a true testament to their love for each other and the strength that they provided each other to heal and reach out to other victims. I sure as hell hope the Vallejo Police Department has cleaned up their act because they should be sitting in jail