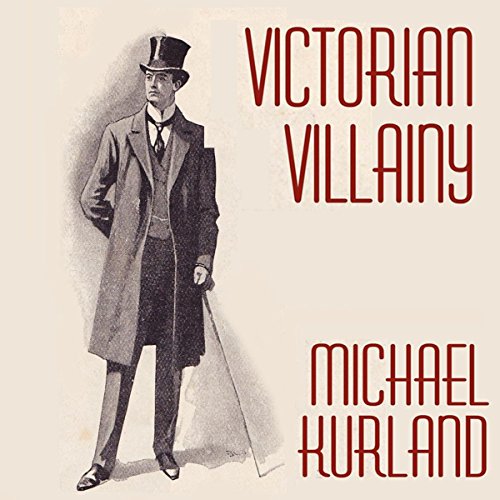 Written by: Michael Kurland
Narrated by: Steve Coulter
Try for $0.00

Among the world's great fictional villains Professor James Moriarty stands alone. Doctor Fu Manchu, Hannibal Lecter, Count Dracula, Iago, Voldemort, Darth Vader, Bill Sikes, Inspector Javert, and the Wicked Witch of the West all have their fans, all have their place in popular fiction. But for every one who can tell you whose life Iago made miserable, fifty honor that Professor James Moriarty was the particular nemesis of Sherlock Holmes. But just how evil was he?

These stories by Michael Kurland explore an alternate possibility: that Moriarty wasn't evil at all; that his villainy was less along the lines of Fu Manchu and more like Robin Hood or Simon Templar. And the reason for Sherlock Holmes' characterization of him as "the Napoleon of crime" was that the professor was one of the few men he'd ever met who was smarter than he - and he couldn't stand it!

What listeners say about Victorian Villainy

I doubt The Professor would approve

This may come down to personal taste. If you get something out of this book I’ll be genuinely happy for you. I however did not. I’m a bit of a connoisseur of villains and villainy. I love a book about villains or a story told from the villains perspective. Professor Moriarty is one of my all time favorites. There have been some truly incredible and original Moriarty stories published. John Gardner’s Revenge Of Moriarty series and Kim Newman’s Professor Moriarty: The Hound Of The D’urbervilles both get recommendations from me, the latter being the best outside the Holmes canon in my humble opinion. The Professor can be so many things. He can be a Victorian gangster, a nefarious Blofeldian player on the international stage, a vindictive and hateful math professor, a noble father of the criminal underworld, or even a committed man of science dabbling in crime to finance his endeavors. I’ve read stories where he is all types. It’s very difficult to make the good professor boring yet I’m sad to say that I think Kurland found a way. For one, the title and summary are both very misleading. If you’re looking for true Victorian villainy you won’t find it here. There’s no real enmity or rivalry between Moriarty and Holmes, no Don Corleone-esque master of the underworld, no spider at the center of a web of shadows. He’s more a bored middle aged scientist who uses crime to pay his mundane expenses than anything else. In the 100+ years since his first appearance he’s been many things to many people yet I struggle to think of a more uninspired interpretation of one of the best villains ever created. His choice of sidekick had potential but again it goes nowhere. I was pining for Colonel Moran before long to bring some color to the story. If nothing else Moran would’ve given the reader insight into Moriarty’s very very vaguely described “villainy”. If you’re looking for something that fleshes out the good professor in a fun or interesting way you would do well to give Victorian Villainy a pass. I think most readers or fans of Arthur Conan Doyle’s greatest villain will get much much more out of the aforementioned books by John Gardner and Kim Newman.

This was a very entertaining collection of stories featuring the famed nemesis of Sherlock Holmes, Professor James Moriarty. Having listened to a wonderful audio only collection of Moriarty stories, I decided to look for similar books in this focus. While Sherlock receives the lion share, I enjoy the approach that Moriarty wasn't simply a criminal. He is also a consulting detective with links to the underworld. The first tale is Moriarty's version of how he and Sherlock met. The second is Moriarty's version of what happened at the Reichenback falls. The Parasol Paradox and Picture of Oscar Wilde are both enjoyable original tales on their own. His amazing powers of deduction and willingness to take cases Holmes won't make him a popular option for clients seeking assistance. I read this book using immersion reading while listening to the audio book. Steve Coulter does a wonderful job with the various accents and brings the tales to life. Change your point of view and enjoy.

Moriarty = More Holmes than Holmes Himself

Michael Kurland's collection of four stories features Professor James Moriarty as the protagonist (and even, one might say, hero). All four fit within Arthur Conan Doyle's canon -- or, at the very least, they don't contradict it -- but offer a very different perspective. From Kurland's Moriarty-centric point of view, Moriarty is a consulting detective in his own right, called "criminal" only because he's more practical in his means and willing to be creative in how he funds his scientific experiments. Despite the fact he operates in a "grey area" with regard to the law sometimes, he is consulted by various officials including Inspector Lestrade and even Mycroft Holmes when necessity requires it.

The portrait listeners get of Sherlock Holmes is of a petulant, adolescent-like personality, at once willing to learn from Moriarty but also terribly jealous and suspicious of him. Throughout the course of the four stories, we see Moriarty offering pearls of wisdom that Holmes would later mimic and claim as his own insights.

"Years Ago and in a Different Place" explores how Moriarty and Holmes first met (when the former was a lecturer and the latter a student) and the tragedy that caused Holmes to develop a lasting antipathy for his nemesis -- and, for that matter, distrust of women.

"Reichenbach" tells the "real" story of why Holmes and Moriarty together staged their deaths at Reichenbach Falls and what they were up to as their respective circles mourned them.

"The Paradol Paradox" and "The Picture of Oscar Wilde" are told from the perspective of Moriarty's very own Dr. Watson -- alas, no Sebastian Moran here! -- an American news reporter turned partner-in-crime. Moriarty's solution to the latter mystery, a case first refused by Holmes, shows how Moriarty is willing to act in ways Holmes is not while tidying up an investigation. (To be fair, this is a question of degree, not kind, as Holmes proves willing in canon to break all manner of laws.)

These stories are very well written and engaging, with entertaining glimpses into the international affairs and personal politics of the era. I personally would have preferred a different Moriarty, not one who is more Holmes than Holmes himself, and a study of his relationship with Moran and perhaps even the other Moriarty brothers. Even so, I enjoyed listening to this solid collection.