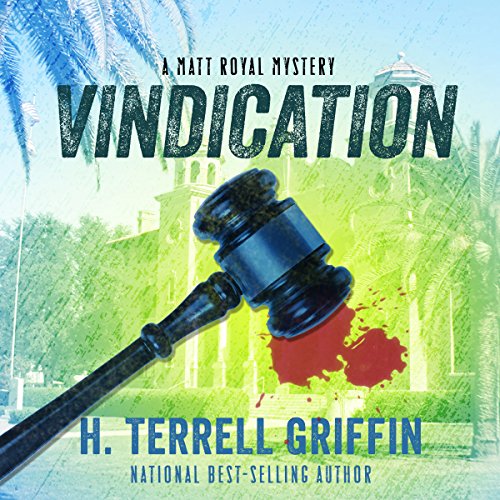 A premier adult community with everything you could possibly want, need, or dream of doing in your retirement years is just a golf cart ride away - now the scene of a murder.

In this John Grisham-style mystery, Matt Royal, the retired lawyer turned beach bum is called back into the courtroom to defend his girlfriend J. D. Duncan's Aunt Esther, who lives in the sprawling North Central Florida retirement community of The Villages. A best-selling author has been murdered after a book signing, and Aunt Esther has been arrested. Matt has a history with the local sheriff - one which may not bode well for his client.

Matt reluctantly suits up for the courtroom, and J. D. takes a leave from the police department to go undercover. A bizarre specter from the past haunts their investigation every step of the way. As they delve further into the case, the pieces of the puzzle refuse to fall into any kind of coherent pattern. Jock Algren arrives with his special skill set to expose the real murderer and free Aunt Esther, but to no avail. Not until the case goes to trial and the evidence is revealed does the truth emerge - and a strange kind of justice prevails.

What listeners say about Vindication

Vindication, the most recent release, is Book 11 in the Matt Royal series by attorney H. Terrell Griffin. Unfortunately, only six of the 11 novels are available in audio format. Vindication is an excellent legal thriller with a superb plot and and lots of courtroom action. Like all novels in the Matt Royal series it is set in Longboat Key, Florida (central gulf coast near Sarasota). Matt Royal is a rather young and wealthy retired lawyer who seeks to avoid the courtroom, but he is never successful. In this book he is defending the aunt to his girlfriend (and police detective) J. D. Duncan. The old lady is accused of murder. As usual for him Matt Royal uses his legal skills along with some behavior which is less than legal. Steven Roy Grimsley narrates all audio books in the series. Grimsley voice and style are perfect for the series. If you enjoy legal thrillers, especially light and fun ones, the Matt Royal series is worth checking out.

I love this series because the characters are familiar and easy to love. Narration is always superb. I had technical difficulties with it though and when I called the girl could barely speak English and couldn't understand what the problem was. I THINK I heard the whole book but am not sure. If everything is working you will enjoy the story.

This is the second Griffin novel that my wife and I have listened to on our ride back from the Longboat Key area in Florida to New Hampshire. We totally enjoyed it and it kept our interest throughout. The story is enhanced by reference to places we are familiar with at Longboat, Sarasota and the Villages. And, the courtroom drama gave this book some added appeal.

Matt and JD take on Killers in The Villages

Matt Royal books are a fun fast ride that have proven to be quite popular among author, H Terrell Griffin's, growing fan base. This one, "Vindication" is the second of Matt's sagas that take place in a courtroom setting (the other being "Chasing Justice") where he leaves beach bummery temporarily behind to pull a friend out of the frying pan with his superior tribunal skills. Courtroom dialogue is always fun and really moves the drama along. Expectantly, "Vindication" moves quickly and, as usual, is expertly told by veteran narrator, Steven Roy Grimsley, who's provided the spoken word on all 9 of Matt Royal's mysteries. (Two early Matt Royal books have yet to be made into audiobooks, he said breathlessly.) So, for those who enjoy regional mystery writers and their book's protagonists, aka Matt Royal, from the Florida Gulf Coast, Matt Royal Mysteries are a great beach read/listen especially with all the local geographical references.

I had the unfortunate experience of reading a lengthy trash review of this audiobook in which the author of said review must have spent an hour or two writing it up. My philosophy is when you hear a book you don't like, for any reason, why waste an hour or more trashing that book in a review? Why not just turn it back into Audible, get your credit, and move on to an audiobook you find more to your liking. It took me 5 minutes to write up this review. Do you think for a minute I'd spend an hour trashing an audiobook I didn't like? I could have on many occasions, but why? My philosophy is, let the author, his fans and the narrator have their day. I don't have time for such insidious silliness.

Couldn't get through it. The story seemed to drag and the narrator is not good on some of the voices.

Unbearable - on so many levels