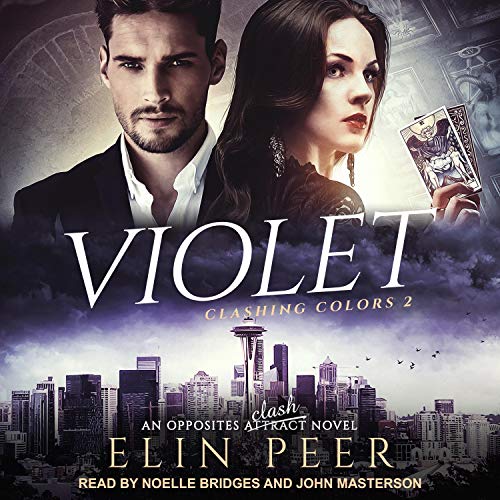 Science and faith face off in this lovely contemporary romance novel full of lovable and witty characters.

Ever since I fell in love with Jake as a child, I've thought of him and me as opposites who would complement each other. I'm a psychic medium who works with spirits and tarot cards while Jake is a scientist who only believes in things that can be proven with hard data. Unfortunately, adulthood has only increased our differences, and to Jake and everyone around us, we're more like clashing colors that should avoid mixing. Although I can clear a house of spirits, I have no clue how to clear my heart of Jake.

Violet is called upon by a group of scientists to investigate supernatural phenomena in their lab. It could be her chance to prove to Jake, her longtime crush, that what she does is valid. But can she produce evidence strong enough for the biggest skeptic to believe that all psychics aren't frauds? And if she succeeds, will he finally see her as more than his best friend's younger sister?

What listeners say about Violet

Book 2 in a series but a standalone, VIOLET is a beautiful, convincing story of a young woman with special gifts. It’s very difficult for me to enjoy novels with paranormal elements, but here, I was a total believer in Violet because the writing was excellent. Violet is a woman I admired for staying true to herself and enduring hate and contempt from many, including those closest to her. As a scientist, Jake is Violet’s polar opposite and a complete sceptic. He faced a difficult inner struggle on his journey to understanding. To a man of science as himself, Violet’s lifestyle and beliefs were abhorrent. In this superb romance, their differences were beautifully explored and overcome in a realistic and complex manner. I loved how author Elin Peer handled it, and this story just proves I am onto a good thing with her novels.

I have read the next novel in this series, GREEN, and can say the timeline of events in VIOLET and GREEN occur contemporaneously. The author cleverly crosses over events in a way that adds depth to the reading experience in these two stories. Shared dialogue in the two romances showed me alternative perspectives to the meanings of words and actions. It was extremely well done and I recommend reading both stories in close proximity to get the most enjoyment out of them, including a wonderful romantic experience.

The respectful way the couples interact and communicate in the CLASHING COLORS SERIES is refreshing and welcome. In each story including VIOLET, the tension builds and you can feel the strong love that binds each couple. When they hurt, you hurt; when they are joyous, your heart leaps along with them. This is great romance. I am devouring the books in this series at a rapid speed.

The Audible version narrators Noelle Bridges and John Masterson provide a pleasurable listening experience with their fabulous characterisations in each story.

I highly recommend VIOLET (and GREEN) especially in the Audible version.

The Medium & the Scientist

How do a rational, analytical scientist and a spiritual healing psychic overcome a past riddled with misunderstanding, miscommunication and a lifetime of differences? The second installment of the Clashing Colors Series, “Violet” by Elin Peer is a beautiful story of self discovery and one’s ability to see past their own limitations to open themselves to love and healing.

Ms. Peer has done it again! The dual narration is superb, as the narrators bring each of the characters to life! A MUST READ!