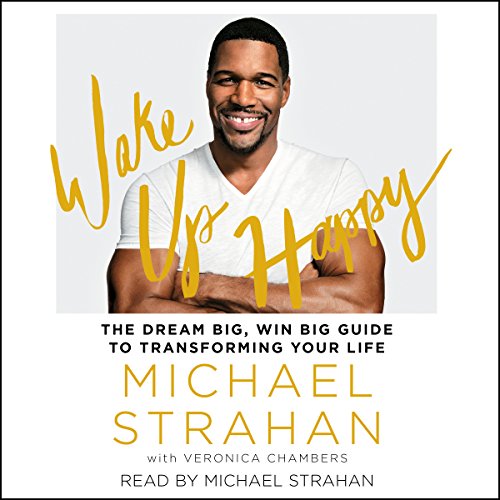 Winner of the 2016 Audie Award for Business/Personal Development

America's favorite football player turned morning talk show host, Michael Strahan, reads his book of motivational advice on how to turn up the heat and go from good to great in pursuit of your personal ambition.

Michael Strahan spent his childhood on a military base in Europe, where community meant everything and life, though idyllic, was different. For one, when people referenced football, they meant soccer. So when Michael's father suggested he work toward a college scholarship by playing football in Texas, where tens of thousands of people show up for a weekend game, the odds were long. Yet he did, indeed, land a scholarship and from there a draft into the NFL, where he scaled the league's heights, broke records, and helped his team win the Super Bowl, as a result of which he was inducted into the Hall of Fame. How? By developing "Strahan's Rules" - a mix of mental discipline, positive thinking, and a sense of play. He also used the rules to forge a successful post-pro-ball career as cohost with Kelly Ripa on Live! - a position for which he was considered the long shot - and much more.

In Wake Up Happy, Michael shares personal stories about how he gets and stays motivated and how you can do the same in your quest to attain your life goals.

Here are a few of "Strahan's Rules":

1. Listen to other people, but don't take their opinions for fact. Have your own experiences. Draw your own conclusions.
2. You can't change other people, but you can change how you act around them. Usually that's more than enough.
3. Don't prejudge. Help can - and will - come from the most unexpected places. Be open to everything around you.

Inspiring and chock full of advice that will help you make significant strides toward pursuing your dream, Wake Up Happy is a book no one, young or old, male or female, will want to miss.

"This celebrity motivational audio works on a number of levels.... His stories and memorable insights - 'Strahan's Rules' - will inspire more optimism and better career/work habits in anyone who hears them." ( AudioFile)

What listeners say about Wake Up Happy

Not a lot of heft

As personal development books go this was light. Michael has an interesting back story and is a person of tremendous accomplishment but the system he laid out didn't really work for me. It's a system that could work for someone with Michael's unique make of qualities. Very different experience as an adolescent, tremendous physical gifts and a charisma that must have always been there. Getting these skills to the level he got them to was no small thing, but would his system translate to the average person? As well, not a lot of evidence backing up recommendations, which to be fair, is quite common with these types of books. He does cite some research but generally, it's "this is what worked for me." If you're football fan there's not a lot of pro stories, but if you interested in learning more about Michael as a person, it's for you.

Love, love, loved this book...I couldn't wait to hop in the car and hit play. A little sad that I'm done with the book because I won't get to hear his voice to start my day...I have a few other books I need to listen to and read before I listen to Wake Up Happy again...yes I will listen again!

I was skeptical at first Michael being a football player and not a writer. However, I felt like he was speaking to me and for the first time will probably go by this in print so I can refer back to it. I found his life story very interesting, he is funny and doesn't take himself too seriously. I feel like I took a lot away from this book and learned several things about how to have a positive outlook in life.

Where does Wake Up Happy rank among all the audiobooks you’ve listened to so far?

Michael Strahan delivers a funny, family oriented story of his unique upbringing as a military brat, born in Germany and his assimilation into Black American culture, whether he understood it or not.As an Army brat myself, I appreciated and related to his experience and delighted in the life lessons he shared from his dad, his coaches and his life.

What other book might you compare Wake Up Happy to and why?

Shonda Rhimes book, Say Yes For a Year, provides her personal stories that help you see how different people can have such divergent experiences, yet accomplish huge goals when they adjust their thinking. Most of us need to do that, along our journey.

What does Michael Strahan bring to the story that you wouldn’t experience if you just read the book?

Michael's voice, laugh, humor and sincerity come through in his reading. It makes me want to listen over and over, without tiring of his message.

No, I took it with me and listened on my iPhone, as well as on my Macbook Pro.

I really enjoyed learning about his childhood, his football career, and what drives him to do what he does.

It's great to hear Michael tell his own story.

How he addressed his childhood weight problem told me so much about him.

What did you learn from Wake Up Happy that you would use in your daily life?

Michael provides a laundry list of motivational speakers, authors, and individuals from which he's learned key things. I need to re-listen to start assembling my own list of supplemental reading.

I highly recommend this listen. It's easy to follow and highly entertaining as well as motivational.

Where does Wake Up Happy rank among all the audiobooks you’ve listened to so far?

I loved this audiobook, it's definitely top 10 in the self-help genre.

He had humble beginnings, worked hard, and speaks with an effervescence and acuity that can reach anyone at any stage in his/her life. His advice stems from his friends, family, and his own experiences, lending credence to his honesty and infallibility.

What’s an idea from the book that you will remember?

The epilogue chapter on love was especially honest and something I could identify with.

Great Book For Everyone Especially For Our Kids Today

I loved the book! This is what our Society needs today is more structure and discipline from the parents or caregivers for our children of today.

Accountability and respect are key things missing from the kids and some people today. Go back to the basics if you want something work for it instead of this self entitled Society of people today.

I like Michael had to work for whatever I wanted and it made me a better stronger person. It is hard for employers today to find people with these strong work ethics as Michael and many of us that grew up in this era have,

If you truly want something whether it be a healthy fit body or a better life you must look for it from within and WORK for it!

What did you love best about Wake Up Happy?

The story was genuine, it made sense and I loved the details.

What other book might you compare Wake Up Happy to and why?

None. It's a class of its own.

The part where he talks about Bob ( but on back)

Thanks Mr. Strahan. It was a great book.

Never Judge a book by it's cover

If I could be honest wasn't a Michael Strahan fan. Really thought he was a man that was just in to him!! Well Michael not only did you change my thoughts about you defiantly open my eyes on many things! So first my apologies for my private thoughts of you ( defiantly weren't kind) and Secondly thank you for sharing your story!!,I wish my son could speak with you one to one!! He is a freshman at Howard University playing football and plays Defensive End!! My cousin who helped with your documentary sent him this book my son said it's helping him!! So with that I say Thank you for being apart of his village through your story!! Grateful 🙏🏽 ❤️

Changed my life for sure

This is one of the best books I have ever read. If you want to wake up happy and have been in a tough relationship and want to find yourself. Read this.

Loved this from beginning to end!! Michael Strahan shares his story of building a HAPPY & SUCCESSFUL LIFE thru self-determination and a commitment to continuous improvement.