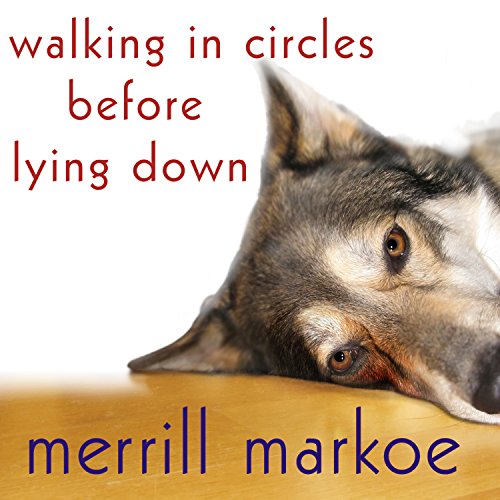 Walking in Circles Before Lying Down

Written by: Merrill Markoe
Narrated by: Renée Raudman
Try for $0.00

Dawn Tarnauer's life isn't exactly a success story. Already twice divorced, the young Californian is too busy job-hopping to start a career, her current boyfriend insists on living "off the grid," her life coach sister perpetually interferes with incomprehensible affirmations, her eccentric mother is busy promoting the culmination of her life's work - the Every Holiday Tree - and her father is ending his brief third marriage while scheduling two dates for the same night.

Dawn's only source of security and comfort, it seems, is Chuck, a pit-bull mix from the pound. So, when her boyfriend announces that he's leaving her for another woman, a despairing Dawn turns to Chuck for solace. "I should have said something sooner," Chuck confides, as he tries to console her. "Couldn't you smell her on his pants?"

Dawn is stunned. It's one thing to talk to your pets, but what do you do when they start talking back? It's not just Chuck, either; she can hear all dogs - and man's best friend has a lot to say.

The ever-enthusiastic Chuck offers his tried-and-true advice on the merits of knocking over garbage and strewing it everywhere, auxiliary competitive peeing etiquette, and the curative powers of tossing a ball. Doubtful of her own sanity, Dawn considers that, in the ways of life and love, it might be better to trust Chuck's doggie instincts instead of her own.

What listeners say about Walking in Circles Before Lying Down

First of all, I rarely read fiction. I have more of a self help, history, and sociology kind of library. But my cousin talked me into this listen and I have to admit, I thoroughly enjoyed it. The story revolves around a woman who finds out that she can talk to dogs after a breakup with an unfaithful boyfriend (the dog says "You didn't know? Couldn't you smell her on his pants?") Add to that, a ditzy mother, a spacey sister, and an assortment of unsuitable love interests, and you've got a book that kept me smiling as I was tooling down the highway. It's really well written and the narrator had enough of a repertoire of voices to keep all characters clear in your mind's eye. I can't wait to read/listen to more of this author's books.

Laugh out loud funny for anyone who loves dogs. Started calling my dog Chuck! Merrill Markoe can obviously read puppy minds! I highly recommend. Have suggested this book to many and I have yet to get anything but an enthusiastic two thumbs up

Walking in circles before lying down is a great book, but as usual I enjoyed reading the book more then listening to it. But non the less I love Merrill Markoe her storying telling.

What does Renée Raudman bring to the story that you wouldn’t experience if you just read the book?

No, I wasn't as crazy about her voice in my head as my own.

Was Walking in Circles Before Lying Down worth the listening time?

Merrill needs more and more books from the dogs point of view.
getting ready to listen to and then read Nose down, Eyes Up.

Author has a great imagination. Loved the story. I thought the narrator made Chuck sound similar to Bart Simpson and that was great as it made him sound like such a fun and funny dog with a lot of sense.

A favorite of mine!

I've always loved this book. I read it right after it was published years ago after stumbling upon it by accident. The title drew me in and once I read the back I knew it would be an amazing read. Markoe did not disappoint! This story will forever be one of my very favorite moons my entire life. I'm so glad I got to hear it again!

I love this book! I have read it five times and listened to the audio version three times (I have major insomnia so books are very important to me). This book has such a wonderful and creative storyline. I am a huge animal lover and if you are, you will love this book.

Life is incomplete without a dog by your side...

I purchased this after I read the the book. And.....I enjoyed it so much more! It is the kind of story that stirs up every emotion we have inside- joy, anger, sadness, excitement, humor, contentment, etc.... It is full of witty dialogue, heart-wrenching decisions, and life lessons....given to us honestly and simply by man's best friend, a dog.
This is a must-have for my fellow dog lovers who believe that life isn't complete without a faithful canine by your side!

Doesn't Quite Carry it Off

It's not that the book is horrible, but it just doesn't carry out the promise in the title or blurb. There are some good moments of humor as well as pathos and crisis, but it's mediocre fare.

The title led me to believe it would be humorous, but it was not that great of a book. The story was mundane, weak women, stupid men. They through a dog into it for a better plot, but that didn't work well. I finished it just because I hate leaving things undone, but I am sorry I wasted a credit.

What would have made Walking in Circles Before Lying Down better?

Could have been written better.

What could Merrill Markoe have done to make this a more enjoyable book for you?

Have more highs and lows, some type of flow to the book, instead it's a very monotone story line.

Sometimes her over reading the story made it hard to keep concentrated on the story line.

It was about a dog and I'm an animal lover.

If your looking for a mildly entertaining book about a dog that is wrote not only from the author's point of view but also the dog's at times, then you will enjoy this book. Nothing outstanding about it though.