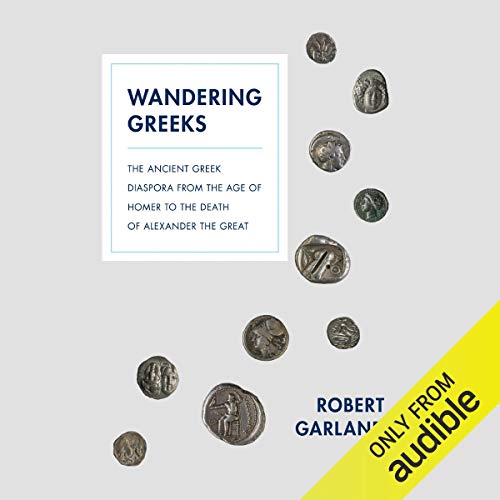 Written by: Robert Garland
Narrated by: John Lee
Try for $0.00

Most classical authors and modern historians depict the ancient Greek world as essentially stable and even static, once the so-called colonization movement came to an end. But Robert Garland argues that the Greeks were highly mobile, that their movement was essential to the survival, success, and sheer sustainability of their society, and that this wandering became a defining characteristic of their culture. Addressing a neglected but essential subject, Wandering Greeks focuses on the diaspora of tens of thousands of people between about 700 and 325 BCE, demonstrating the degree to which Greeks were liable to be forced to leave their homes due to political upheaval, oppression, poverty, warfare, or simply a desire to better themselves.

Attempting to enter into the mind-set of these wanderers, the book provides an insightful and sympathetic account of what it meant for ancient Greeks to part from everyone and everything they held dear, to start a new life elsewhere - or even to become homeless, living on the open road or on the high seas with no end to their journey in sight. Each chapter identifies a specific kind of "wanderer", including the overseas settler, the deportee, the evacuee, the asylum-seeker, the fugitive, the economic migrant, and the itinerant, and the book also addresses repatriation and the idea of the "portable polis". The result is a vivid and unique portrait of ancient Greece as a culture of displaced persons.

What listeners say about Wandering Greeks

The "story" star rating is inapplicable, as this is not a narrative history (but it is impossible to leave a review without rating the "story" - one wonders how the "story" is rated on self-help titles).

The book is a well-written survey monograph focusing on exile and expatriate life in ancient Greece. It's one of the better written (and better read) historical monographs available on Audible (note to Audible: more historical monographs!), but I wouldn't recommend it for casual listeners with no background in classics; it's not a narrative, and it digs fairly deeply into ancient Greek sources and archaeology.

Please remove the footnotes from reading.

Would you try another book from Robert Garland and/or John Lee?

Sure, but please don't include the citations in the recording.

Omitting the citations would have made the narration bearable.

If you could play editor, what scene or scenes would you have cut from Wandering Greeks?

Not your run of the mill study of the greek world

I was expecting to enjoy listening to RG's book and i was right... Well done !
p.s : the quotations are an integral part of an unabridged book and you get used to them ...

An anti western piece that is quite disappointing in not sticking to the ancient greek theme its passed off to be.