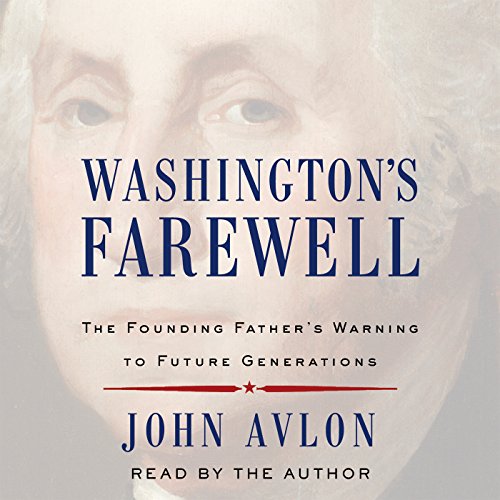 George Washington's Farewell Address was a prophetic letter from a "parting friend" to his fellow citizens about the forces he feared could destroy our democracy: hyper-partisanship, excessive debt, and foreign wars.

Once celebrated as civic scripture, more widely reprinted than the Declaration of Independence, the Farewell Address is now almost forgotten. Its message remains starkly relevant. In Washington's Farewell, John Avlon offers a stunning portrait of our first president and his battle to save America from self-destruction.

At the end of his second term, Washington surprised Americans by publishing his Farewell message in a newspaper. The President called for unity among "citizens by birth or choice", advocated moderation, defended religious pluralism, proposed a foreign policy of independence (not isolation), and proposed that education is essential to democracy. He established the precedent for the peaceful transfer of power.

Washington's urgent message was adopted by Jefferson after years of opposition and quoted by Lincoln in defense of the Union. Woodrow Wilson invoked it for nation-building; Eisenhower for Cold War; Reagan for religion. Now the Farewell Address may inspire a new generation to re-center our politics and reunite our nation through the lessons rooted in Washington's experience.

As John Avlon describes the perilous state of the new nation that Washington was preparing to leave as its leader, with enduring wisdom, he reveals him to be the indispensable Founding Father.

Great history and narrator, but betting in print

Really interesting listen, though perhaps best suited to a physical format. The history is very complicated, interconnected, and intense.

I didn't know much about Washington's story, or even much about the foundation of America after the Revolutionary War. I heard John P. Avlon interviewed on Charlie Rose over a year ago when Obama was about to give his farewell address. Avlon was so well spoken and presented the information so well that I really wanted the book, but then with the first year of Trump and stress in personal life I just didn't feel I could get through the heavy American history. When I finally decided to go for it, I was enthralled by the history, confused at times, but also really interested. It probably took me another half the book's total run time of skipping back to try and understand things. I purposefully went on long walks with the dog I was taking care of just to try to get in larger chunks of the book at one time.

I recommend it for people interested in American history, politics, or current affairs, but would recommend getting a physical version of the book!

The author provides a thorough and very interesting review of the substance of the address including Washington's intended meaning as well as application through time. He provides just enough facts surrounding the drafting of the address and of the state of the country at that time to ensure that the reader understands the context of the address, without getting lost on tangents. I believe he achieved just the right mix.

Finally, often authors cannot do justice to their own work and would be better served by a professional. This is not one of those cases. The author does an excellent performance; as good as any professional reader.

Reassurance and understanding for these unsettling times.

I recommend this book to anyone seeking to understand the circumstances surrounding our country's creation. You can read the Constitution, but Washington's farewell letter shows the issues he felt were important to the survival of the country. Reaffirms my confidence in our constitution, the procedure for amending it if necessary, and the value of checks and balances. If we participate, we should be fine.

Avlon crafted an enjoyable and informative work - getting to look behind the curtain of the motivations and composition of the famous document was a treat.

First and foremost, John Avlon should be commended for his research into George Washington's Farewell address, because his efforts certainly pay off. Also, Avlon does a terrific job narrating the story of the Farewell address, which continues long after our first President's passing.

Second, upon finishing Avlon's book, words cannot express my appreciation for everything George Washington gave to America. The first President's time in office was rife with policy disagreements, dangerous foreign influence over domestic issues, and bitter partisan in fighting that threatened to tear America apart. Amid all the chaos, Washington stuck to his principles as best he could and never faltered in his dedication to the American experiment. Washington imparted some final words of wisdom before he retiring and they are worth remembering, now more than ever. Beyond highly recommended.

I learned so much about a great man!

For some reason there is so much about our founding father I did not learn in school. This book is a great way to learn more about the man who stabilized this great nation of ours and how his legacy lives on today.

The perfect book for our current political landscape

Washington's plea for us to remember before we are Northerners or Southerners, urban or rural, Republican or Democrat, we are Americans first is very pertinent to today. The book is well researched and well read.

What a great reminder of our tremendous past and of our great heritage. Every part of this, historically, spoke to my soul. This is a wonderful review of a mostly forgotten treasure from the sacred history of our nation.

Deep insights into our first President

I have a degree in PoliSci and learned so much about the founding principles and struggles of our country, as well as the evolution that got us to where we are. This book should be required reading for and political candidate.

Great book! Interesting topic and a very “user friendly” treatment of it. I’m sad we don’t all spend more time studying this important address these days. Maybe if people did we’d be in a different place as a nation. I will look forward to listening to this one again!

Wow! We can learn a lot from history

The book was very easy to listen to. I liked the way the author gave a historical perspective as to what were the events that influenced Washington and how they were included in the writing of the speech.