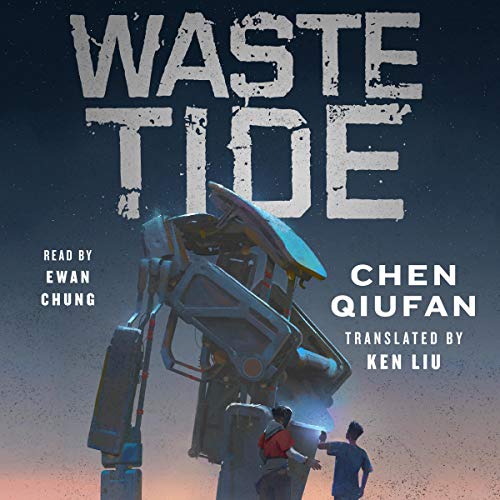 Mimi is a "waste girl". A member of the lowest caste on Silicon Isle, located off China’s southeastern coast, and home to the world’s largest electronic waste recycling center. There, thousands of miles from home, Mimi struggles to earn a living for her family and dreams of a better life.

Luo Jincheng is the head of one of three clans who run the island, a role passed down from his father and grandfather before him. As the government enforces tighter restrictions, Luo in turn tightens the reins on the waste workers in his employ. Ruthlessness is his means of survival.

Scott Brandle has come to Silicon Isle representing TerraGreen Recycling, an American corporation that stands to earn ungodly sums if they can reach a deal to modernize the island’s recycling process.

Chen Kaizong, a Chinese American, travels to Silicon Isle as Scott’s interpreter. There, Kaizong is hoping to find his heritage, but finds only more questions. The home he longs for may not exist.

As these forces collide, a dark futuristic virus is unleashed on the island. Against the backdrop of a gritty near-future Chinese landscape, in a world of body modifications and virtual reality, a war erupts - between the rich and the poor; between ancient traditions and modern ambition; between humanity’s past and its future.

What listeners say about Waste Tide

The tail end of this book seems to culminate with the ideology that one should resign themselves to their fate because they can't change the world. It is very challenging not to draw cultural similarities to the populace in modern-day China with the populace as described in the book. While I am by no means an expert, I have read and learned much of China both historically and culturally. As an American, I am sure that my opinion means little to any Chinese natives that read this review. That said, however, there are several large leaps of logic and historical accuracy that play heavily into the main plot. The story's historical record is so close to reality that at times without looking up individual facts and events you hardly would know the difference. To this degree, this is an extremely well written novel, but it feels as though it were written to spread misinformation on the actual events of history in order to give the impression that the Chinese were somehow victims on the world stage both in historical record and the plot of the book. Reading from an outside perspective and taken impassively good and bad becomes rather gray scale. Suffice it to say however, there is a lot of outright immoral behavior on both sides of the spectrum. The difficulty I have with the book and the reason that I'm conflicted on giving it more stars overall is that, well written as it may be, it reads as though the oppressors and criminals that even today continue to destroy the well being of our planet and ruin the lives of countless individuals that they will never meet are somehow portrayed in the book as being unsung heroes. This, needless to say does not sit very well with me. it was a good read, but in the rather turbulent global political climate of today, it is a dangerous book that has the potential to sway the opinions of more naive and aggressive youthful individuals into believing the historical record of the book as fact, which is most certainly is not.

Narrator was fantastic, the translation seems as if it was done using an algorithm or somesuch. Some word usage was overly and some just didn’t translate well or was redundant. The story was excellent however and the storyteller has an engaging voice and jumped readily between languages. All in all a great summer read!

Let’s get the obligatory out of the way. Performance and audio quality are great.
Story is deep riveting and intimately human, problem for me was to distinguish all the Chinese names (sorry); and at the same time raw and abhorrent in showing what it means to be on the bottom of human society.

Comparison of “our standards” with future realities of silicone isle uncovers fascinating destructive effect that technology can have on our physical and psychic norms.

Watch out spoiler ahead!

Thanks to the writer for the creativity, and to the translator for making it available in English.

Really good and different sci-fi. I enjoyed the world building of the author, felt very much alive in the way Blade Runner does. Recommend.

An interesting look at a potential future.

If you enjoyed Snow Crash, you will most likely enjoy Waste Tide. The most interesting thing about this book is the authors view of recycling.

Loved it. As a tech enthusiast and major "scientific" scifi fan, I highly recommend.

The plot dynamic of the beginning of the story somehow loses and slows towards the end. Not all characters motivations are clear. But overall this is quite good story. Although Chinese sci-fi is not very abundant.