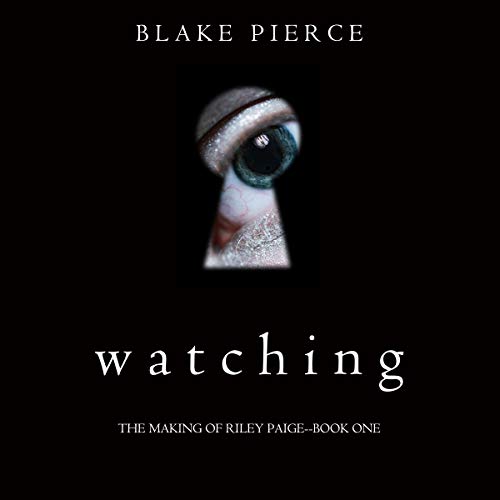 Watching: The Making of Riley Paige, Book One is the first audiobook in a new psychological thriller series by number-one best-selling author Blake Pierce.

Twenty-two-year old psychology major - and aspiring FBI agent - Riley Paige finds herself in a battle for her life as her closest friends on campus are abducted and killed by a serial killer. She senses she, too, is being targeted - and that if she is to survive, she must apply her brilliant mind to stop the killer herself.

When the FBI hits a dead end, they are impressed enough by Riley’s keen insight into the killer’s mind to allow her to help. Yet the killer’s mind is a dark, twisted place, one too diabolical to make sense of, and one that threatens to bring Riley’s fragile psyche crashing down. In this deadly game of cat and mouse, can Riley survive unscarred?

An action-packed thriller with heart-pounding suspense, Watching is audiobook one in a riveting new series that will leave you listening late into the night. It takes listeners back 20-plus years - to how Riley’s career began - and is the perfect complement to the Once Gone series (A Riley Paige Mystery), which includes 13 titles and counting.

What listeners say about Watching

Strange mismatch between narrator and book

The book is not bad, and neither is the narrator, but this narrator is completely wrong for the book. The book is set in rural Virginia, USA, but the narrator reads every character as if they were British! I kept thinking that the characters sounded as if they were extras in the movie version of “ My Fair Lady.” I might have liked the narrator a lot if she were reading a book set in England, but hearing rural Virginians talk like this was just too bizarre to be enjoyable.

So, not my cup of tea, errr coffee, whatever.

I won't get through this book, I am ashamed to say.

It's not just that the narrator is English and narrating a story set in the United States; it's that's she's breathy, rushed and for want of a better word, annoying.

The American college students in the first chapter sound like English high school girls putting on a Jane Austin play. It's all so precious.

I made it through two chapters.

Super story but an American setting with a British accented speaker was a little off-putting. Looking forward to reading more about Riley Page.

I really enjoyed the story and the twists. The narrator was good, but the accent of the narrator really threw me off and where the story took place. Looking forward top more!