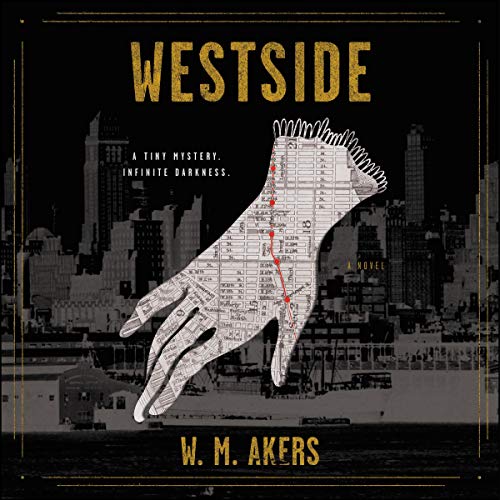 "Bracing, quite possibly hallucination-inducing, and unlike anything you’ve ever experienced before.... The illegitimate love child of Algernon Blackwood and Raymond Chandler.” (Kirkus Reviews, starred review)

New York is dying, and the one woman who can save it has smaller things on her mind.

A young detective who specializes in “tiny mysteries” finds herself at the center of a massive conspiracy in this beguiling historical fantasy set on Manhattan’s Westside - a peculiar and dangerous neighborhood home to strange magic and stranger residents - that blends the vivid atmosphere of Caleb Carr with the imaginative power of Neil Gaiman.

It’s 1921, and a 13-mile fence running the length of Broadway splits the island of Manhattan, separating the prosperous Eastside from the Westside - an overgrown wasteland whose hostility to modern technology gives it the flavor of old New York. Thousands have disappeared here, and the respectable have fled, leaving behind the killers, thieves, poets, painters, drunks, and those too poor or desperate to leave.

It is a hellish landscape, and Gilda Carr proudly calls it home.

Slightly built, but with a will of iron, Gilda follows in the footsteps of her late father, a police detective turned private eye. Unlike that larger-than-life man, Gilda solves tiny mysteries: the impossible puzzles that keep us awake at night; the small riddles that destroy us; the questions that spoil marriages, ruin friendships, and curdle joy. Those tiny cases distract her from her grief and the one impossible question she knows she can’t answer: “How did my father die?”

Yet on Gilda’s Westside, tiny mysteries end in blood - even the case of a missing white leather glove. Mrs. Copeland, a well-to-do Eastside housewife, hires Gilda to find it before her irascible merchant husband learns it is gone. When Gilda witnesses Mr. Copeland’s murder at a Westside pier, she finds herself sinking into a mire of bootlegging, smuggling, corruption - and an evil too dark to face.

All she wants is to find one dainty ladies’ glove. She doesn’t want to know why this merchant was on the wrong side of town - or why he was murdered in cold blood. But as she begins to see the connection between his murder, her father’s death, and the darkness plaguing the Westside, she faces the hard truth: She must save her city or die with it.

Introducing a truly remarkable female detective, Westside is a mystery steeped in the supernatural and shot through with gunfights, rotgut whiskey, and sizzling Dixieland jazz. Full of dazzling color, delightful twists, and truly thrilling action, it announces the arrival of a spectacular talent.

What listeners say about Westside

Not a bed debut from the author

I rather enjoyed this book, although the audio did seem to have a couple of problems. The pacing was good, and I thought the author did a good job keeping you interested. I appreciate that the ending did have a good twist, and a let down, which you just don't see enough of in a book these days.

I actually have about 11 minutes left on this book. I'm not going to buy, download, and start a book and not finish it. This one I soooo much wanted to END!! The story is okay, sort of. The "science fiction" element is just too complicated and you're never quite sure who is who, where is where, or what is what. It's not that the complication is due to hard science or anything interesting; it's just bad storytelling. And the main character/heroine . . . it's way too unbelievable that a twenty-something female in the early 1900s has such a bravado and inflicts such fear and compliance upon thugs and multi-millionaires and high level criminals. She's just way too confident and successful. Not believable at all. And the performance is just not enjoyable. The performer is unable to provide any distinction in male characters, and can't do an Italian or Irish accent, but instead sounds very Eastern European for both. And her reading is very mechanical at times, which seems to also be a reflection of the writing as there's few contractions (couldn't, wouldn't, don't) making the character sound "formal" in her speech and causing the performer to sound robotic and forced. Just not enjoyable, but I'm too nice to give a 1, as I DID listen all the way through.
FOLLOW UP: I finished the last 11 minutes. OMG!!!!! I'm down to 1 1/2 stars!! This ending confirms my point of this whole story being confusing and complicated, but not in a good, interesting way - just sloppy and just downright frustrating! What happened?? Sometimes we don't understand because the story is intended to be "artsy" or intelligent. No so here. Just avoid this book. Period! Sorry, just had to say that.

One of my new favorites

It took a while to get adjusted to the actor’s breathy voice, but she did a fabulous job. Some of her older men sound very similar which makes dialogue between them difficult. Stellar job with the older women and distinguishing Juliet and Gilda. I was somewhat put off by Cherub’s voice when he got to talking more. I think he started to sound southern and it pulled me out of New York. Adored Ugly LaRoca’s voice. Pacing was perfectly varied to keep the listener fully engaged and wanting to hear what happens next.

The story was so creative and had thoroughly unexpected twists. I am seldom surprised and this story caught me unawares at least twice. I almost wish Gilda had gone back with Virgil because she deserved some happiness and to be softened, but her choice made complete sense. Can’t put toothpaste back in the tube. So much was incorporated in the writing to stimulate the sense that I want to see this made into a movie or miniseries, and even then it would be lacking because the odors could not be imparted ok the viewers as they are so richly described in the book, but at least we could hear the music.

The story started out reasonably but went into so many weird facets that I couldn’t handle it any longer. I don’t usually stop a book but this one was beyond bad.