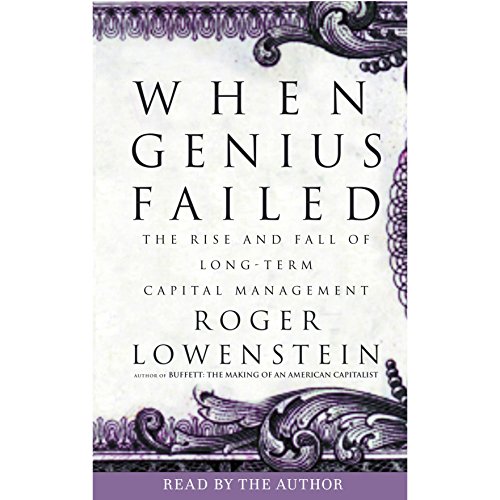 John Meriwether, a famously successful Wall Street trader, spent the 1980s as a partner at Salomon Brothers, establishing the best - and the brainiest - bond arbitrage group in the world. In 1991, in the wake of a scandal involving one of his traders, Meriwether abruptly resigned. For two years, his fiercely loyal team - convinced that the chief had been unfairly victimized - plotted their boss' return. In 1993, Meriwether gathered together his former disciples and a handful of supereconomists and proposed that they become partners in a new hedge fund different from any Wall Street had ever seen. And so Long-Term Capital Management was born.

Meriwether & Co. truly believed that their finely tuned computer models had tamed the genie of risk, and would allow them to bet on the future with near mathematical certainty. Thanks to their cast - which included a pair of future Nobel Prize winners - investors believed them. Four years later, when a default in Russia set off a global storm that Long-Term's models hadn't anticipated, its supposedly safe portfolios imploded. In five weeks, the professors went from mega-rich geniuses to discredited failures. The firm's staggering $100 billion balance sheet threatened to drag down markets around the world. At the eleventh hour, fearing that the financial system of the world was in peril, the Federal Reserve hastily summoned Wall Street's leading banks to underwrite a bailout.

Best selling author Roger Lowenstein captures Long-Term's roller-coaster ride in gripping detail. Drawing on confidential internal memos and interviews with dozens of key players, Lowenstein crafts a story that reads like a first-rate thriller from beginning to end. He explains not just how the fund made and lost its money, but what it was about the personalities of Long-Term's partners, the arrogance of their mathematical certainties, and the late-90s culture of Wall Street that made it all possible.

"This book is story-telling journalism at its best." (The Economist)

"Lowenstein [is] one of the best financial journalists there is." (New York Times Book Review)

What listeners say about When Genius Failed

A bit too dry for my liking

I found that the sheer number of players and numbers involved made it very hard to follow. Really well researched and delivered though because I don’t know how you’d deliver it any other way. It’s just not a gripping as some other similar books I’ve read/listened to.

Informative and interesting, full of suspense

I read this book with the aim of increasing my knowledge about the stock market and various terminologies etc. I did'nt want to read some dull boring book. My way of getting the hang of things when I am *very* new in a field is to listen (or read) on topics related to that field. Knowingly or unknowingly, you start to pick up terms that you had never heard of.

This Book was a very interesting reading all by itself. Many people are drawn towards the stock markets (or success in general) without understanding that success now can be followed by failure. That is the entire essence about being careful and playing safe. Risk management in short.

This book teaches how to be not blinded by present success blah blah blah. its a very interesting book. Informative and full of suspense. It surely teaches somethings. Besides risk management it teaches the value of experience and the concept of rising back from your fall. Many people just accept one defeat as their entire life. There is a lot that can be learnt from this book. Very interesting.

It is a clear exposition of the catastrophic failure of Long Term Capital and the hubris of its most important partners. It's a telling story of why those who wreak havoc on the financial system in pursuit of ridiculous wealth can go unpunished.

What other book might you compare When Genius Failed to and why?

The brightest men in the room and The Big Short

It was read in a sing song voice which varied little in rhythm or pitch.

I could not listen for more than 30 minutes. The book may be good but I could not stand the narration. I suggest you listen to a sample before purchasing. Listen for a while to get a good sense of the narrator's style.

falling off a cliff

Listening to this book provides a great insight into how invincible a small group of people thought they were. Just when you think you have mastered the universe, it begins to unravel right in front of your eyes. Beyond that, you are a witness to how the US government will step in to "protect" the markets when things begin to melt down.

This is an excellent journalistic economics/finance piece that anyone with an interest in finance or economics would find to be a "must-read," and even those ordinarily intimidated by such subjects would find to be a rivetting human story. It is also a little-known financial failure ... even for me, deeply ensconced in the subject of banking, I was distracted at the very same time by President Clinton's dominance of the airwaves with the Lewinsky scandal. LTCM did receive its share of business page headlines, but was overwhelmed by this other event in the popular mind. The book moves along & is very well read too.

I could not stop listening to this book. It was an amazing story. I'm not sure that someone who is not in the financial business would fully appreciate this book, but it is a must read (listen) for anyone who works on Wall Street. One can see the reason that, in 1998, we were "starring into the abyss".

An intricate, Illuminating page turner that kept me glued to my seat at long intervals. I am not sophisticated in financial trading or tactics, but kept reading, listening to the audible narration simultaneously. This method for me increases my comprehension and apprehension of works like this. To understand a subject like finance and trading, I devote considerable time reading dozens of books on the subject. I gained considerable understanding of LTCM and the market from reading this book. The writing could have been clearer, relying less on the passive voice. Also, although the author’s narration was clear, his voice was irritating. I find that authors don’t perform their books well. It is best to get a professional to narrate. That is what I would recommend here.

while this is an interesting read, it could have been a shorter book without compromising the message. The first part was ok, the middle dragged on too much and the ending was very strong. Perhaps the problem was too much detail.
At any rate, the book is very well documented and is able to put you in the situation quite easily.
I would recommend this to anyone who wants to see first hand how being smart is not always a garantee to success, but rather business sense

This is a worthwhile book, and the only one I know of on LTCM, but there were two aspects I thought could have been much better. First, the author reads his own book, which is typically a bad idea and it is in this case as well. Second, the book is overly simplistic and a bit preachy. The author's thesis, that the LTCM managers underestimated the risk from fat tails, is implausible given their sophistication (I'm sure the former LTCM managers would think this explanation is simply ludicrous). I think that the author failed to distill and synthesize the numerous, complex, contributing factors that were actually behind the failure in an effort to have a nice neat bumper sticker rational for its cause.