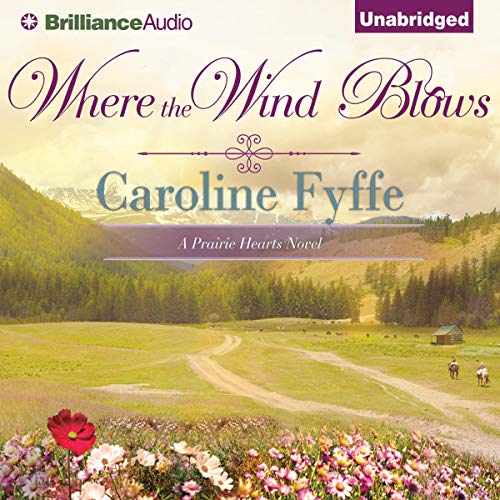 Where the Wind Blows

Written by: Caroline Fyffe
Narrated by: Phil Gigante
Try for $0.00

Chase Logan lives by no man’s leave, a solitary drifter who closed off his heart long ago - until the day he impulsively does a kindness for a beautiful young widow, and everything changes.

For two years, Jessie Strong has dreamt of the day she could bring little Sarah home from the orphanage and call the child her own. But when her husband dies, Jessie fears the family she’s longed for is slipping away - until Chase Logan unexpectedly comes to her rescue. By pretending to be her husband, Chase can make all of her dreams come true.

Three days are all she asks of him. Three days to ignite a love neither of them ever imagined possible….

What listeners say about Where the Wind Blows

Warm as a Wyoming campfire

I’m a guy. I’m not supposed to get misty-eyed over wholesome, historical western romance novels. But I did.

This is a story about second and third chances, responsibility, adoption, acceptance, Chase the cowboy and ultimately the truest type of love, divinely inspired.

Kudos to the narrator and his incredible range of voices, both male and female.

I got this as s Prime freebie and am glad I gave it a chance.

I really overall enjoyed this book. plus I LOVE Phil Gigante as narrator. He always does a wonderful job. The only thing missing was the highland brough that he uses in many of his books! :) Fun read, fun story, very enjoyable.

Phil Gigante delivered a solid performance of this subpar western romance, set in 1875 Wyoming Territory. I especially liked Gigante's portrayal of the cowboy hero, the two kids, and the obnoxious Mrs. Hollyhock. My only quibble is with his portrayal of the heroine, but that wasn't too bad.

As for the story, the only parts I unreservedly enjoyed centered around the orphans, Sarah and Gabe.

The problem is, Fyffe fabricated drama, even though the murderous villains and the daily challenges of life on the hardscrabble land should have been the vehicle for plenty of tension and challenge. In order to manufacture drama, Fyffe used poor communication -- the main characters never said what they really thought, hiding behind all sorts of lame excuses. Misunderstandings and deceptions prevail in the relationship.

The heroine was too stupid to live (for one example, going into town alone when a killer just attacked).

A contrived shotgun marriage. Why DID she share her bed with him -- a virtual stranger? Out of character. There were other sleeping options.

The book is full of platitudes and clichés (don't put up your umbrella before it starts raining; everything happens for a reason).

Characterization did NOT add up. Examples below:

1) The heroine was supposedly warmhearted, loving, and virtuous, but her actions spoke otherwise. I already mentioned tha she shared her bed with a stranger. Even worse, in chapter one she finds out her husband Nathan is dead. Her relationship with Nathan was described as an affectionate friendship, trusting but not romantic. Okay, fine with me, but WHY didn't she seek to bury his body? It's the least we owe our husband, even our good friends. If not a burial, then at least ask the local preacher to say a few words in his memory, even without a body. Nope. Couldn't (wouldn't) she even say a prayer for him? Nope. Instead, she cried because his death means she won't be able to adopt the orphan Sarah. Within days of her husband's death, she is lusting after Chase.

And all the while, the author stuffs the narrative with banal tripe about hope, love, faith. Don't get me wrong. I got nothing against faith, hope, or love, but a character's actions should convey the message.

2) The hero (Chase) is quite intelligent but signs X for his name, because he never learned to read or write. Okay, I can easily buy that, given the setting. However, we are also told that Frank Lloyd taught him all about investments, banking, bookkeeping. He has a substantial sum in the bank and is a careful money manager, yet never bothered to learn to sign his name? A character so ambitious and so intelligent would absolutely learn. A loving mentor like Frank would absolutely teach him.

3) Poor characterization of Mr. Hobbs and his wife. How could such a supposedly wise and kind man have absolutely no idea that his wife viciously abuses the children at their orphanage? The abuse went on for years. RIGHT under his nose. If the orphans love him so much -- and he loves them -- wouldn't he see signs? I cannot swallow Fyffe's portrayal of Mr. Hobbs as wise. His blindness conveys that he's a fool. Or, if he sees the abuse and does nothing about it because the perpetrator is his wife, then he's not kind.

Many people love this book, but I need the plot and characters to cohere, to make sense. I did appreciate the scenes with the two orphans, ages 4 and 12.

Disappointed. Thought it was a “clean” book

Disappointed. Narrator was annoying. Female voices were annoying. Not much of a story. That may have had to do with the narrator. I tried to hang on to the end. Towards the end of the book, I was really disappointed by the “sex” scene. I know that it is mild in comparison with bodice rippers but not something I personally want to listen to. Carolyn Fyffe’s other series The McCutcheon Family was much more enjoyable and without the unexpected mild sex scene,

What a great book

This was a great audio book. Loved it can't wait to hear the next one. Phil Gigante has a great voice and pulls you right in to Wyoming..

Story flowed with ease. Enjoyed every minute. Excellent narrator. I recommend this book to those who like twists and turns along the way.

My first book via Audio, certainly not my last

The story was well written and the audio delivery added to it for an 82 year old sight and hearing impared
person to enjoy it. I will look for more books like this.

The story line captivated me from the first page . I often pick audio book because of the voice and this one was no exception . I loved the narrator so much I went on to purchase three more that he had done . Big fan of the book and the audible

Easy to listen to.... I liked the characters, story, and setting. I feel like the main characters were realistic.