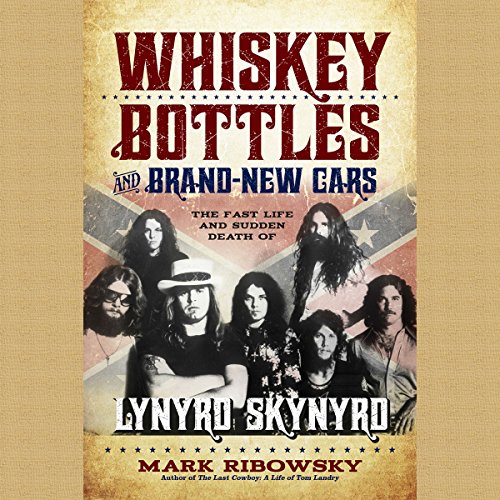 Written by: Mark Ribowsky
Narrated by: Jeremy Arthur
Try for $0.00

This intimate story of Lynyrd Skynyrd tells how a band of lost souls and self-destructive misfits, with uncertain artistic objectives, clawed their way to the top of the rock 'n' roll world. Based on interviews with surviving band members, Whiskey Bottles and Brand-New Cars shares how lead singer and front man Ronnie Van Zant guided the band's hugely successful five-year run and, in the process, created not only a new country rock idiom, but a new Confederacy in constant conflict with old Southern totems and prejudices.

Placing the music and personae of Skynyrd into a broad cultural context, this book gives a new perspective to a history of stage fights, motel room destructions, cunning business deals, and brilliant studio productions. It also offers a greater appreciation for a band whose legacy, in the aftermath of their last plane ride, has since descended into self-caricature.

What listeners say about Whiskey Bottles and Brand-New Cars

What could have been...

I was a Skynyrd fan primarily during my high school and college years; the accident happened my senior year of high school. There was much I did not know about the group’s formation, development, and the sequelae since the plane crash. I thought this book could fill in many blanks and my curiosity led me to the purchase. Parts were enjoyable and parts were objectionable. The accuracy initially seemed to be there, but that may be in question. An attribute of hard copy books as opposed to audiobooks is being able to evaluate the author’s research and references. On this note, please look at those reviews on Amazon, which are written by those apparently having done this assessment in detail and boldly questioning many of the author’s claims. Additionally, I grew very tired of the author’s incessant need to inform the audience of his political beliefs. He never misses an opportunity to push his opinion on the reader/listener, even if it unrelated or only remotely related to topic of the book. Indeed, the author displays his arrogance by failing to subjugate his own views and sacrifices telling the intended story by this political ranting. How does his opinion of Ted Cruz even belong in a historical perspective of Lynyrd Skynyrd? Further, he cannot seem to differentiate between fiscal conservatism and racism, actually revealing his own lack of understanding of the issues about which he repeatedly drones. This could have been a good book, but the author apparently chose to take shortcuts and also use it as a political epistle instead.

Well, the performance was great though the book was just a good okay book. Amazing that to a man, every one of the members of the band are so full of crap nobody will ever know the truth of anything substantial the band ever did.

Moving Story of the Group that Gave Us Free Bird

A quite moving account of Lynyrd Skynyrd, the trials and tribulations, the mercurial rise to fame from obscurity and the subsequent tragedies of the group that sang the music of a generation. Jeremy Arthur is a compelling storyteller (one of my favorites!) and is masterful at bringing the listener into the story...I would often forget I was listening to an audiobook so immersed was I. For any Skynyrd fans, or fans of music in general, I would highly recommend a listen to Whiskey Bottles & Brand New Cars.

What did you love best about Whiskey Bottles and Brand-New Cars?

I have always been a Lynyrd Skynyrd fan, but had not really looked to much into the band's history. So this was super fun to listen to, but i got to learn some things too. I also thought that the narrator was fantastic, and I would love to listen to more audiobooks by him. Overall, no regrets on this book.

Gloriously over the top

Hahaha! What a hoot! Lots of booze and fights and a villain in the band. This is as subtle as a kick in the balls followed by puking Bud Lite Lime on a cop's shoes! Could a biography of Lynyrd Skynyrd be otherwise?

I found this to be very interesting and learned some new things about the band. Narrator was excellent.

Enjoyed the listen immensely. Loved hearing the band's story, the good and the dysfunctional. The narrator had a great voice. The story was very literate and he delivered the narrative with a Southern authority and authenticity. It was even poetic at times. From the way Ronnie Van Zant was described in the book, I feel would have approved of him too. Worth the time. Mark...

As a fan for 40 years this book was a real eye opener. It seems the only "nice " guys were Steve Gaines, Billy Powell and Leon Wilkinson. The author seems to have no hidden agenda, just tells it like it is. Ironically that's the way Ronnie would have liked it...warts and all. If you love Skynyrd music, you have to read/hear this book. You will a new appreciation for the band and the music.

I bought this book at random. Did not know what to expect. As soon as the narrator started telling the story I was hooked. Couldn't stop listening to it on Audible. Lynyrd Skynyrd is from Florida. I am also from Florida and have been living here most of my life. So that caught my attention as well. Over all a very great and interesting book.

Great Info on the Band! But Could Be Better

I'm a huge fan of the first two albums. I really don't know anything about Skynard. I thought it was interesting. Nothing from this book made me feel like I learned anything new or interesting. They were what they are. Southern fighters that were not fake and didn't try to be.

The part that really grabbed my attention was the end of the book about the plane crash. That was sad to hear the circumstances surrounding it. Other than that there was nothing that was really deep.

The best books like this are written first hand and not taken from interviews and word to mouth. When it's not first hand these books are just topical and not as interesting.

I read all of these Rock N Roll era bios and the best come directly from the source.

I read other reviews where the reviewers made a big deal about the narrator. He was great but maybe it was his country accent that made him stand out. Not sure. ??