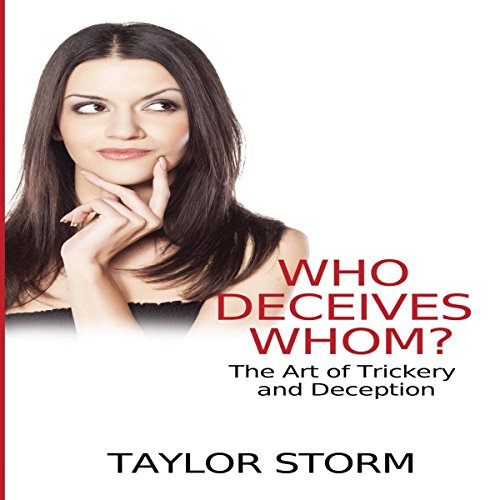 Who Deceives Whom?: The Art of Trickery and Deception

Chloe and Doug fall in love and seem to live what looks like a normal life. However, both of them have secret lives that they have not revealed to each other. Chloe killed Alyssa during a fight over a guy Chloe was dating and whom Alyssa was seeing behind Chloe's back - all before she met Doug. Doug was seeing other wealthy women and stealing from them to support his gambling habits.

Doug reveals his antics to Chloe, and together they plot to stage their deaths by first robbing a bank then going on an expensive vacation and disappearing.

What listeners say about Who Deceives Whom?: The Art of Trickery and Deception

This book wasn't for me.

It wasn't a waste of time. It was a short listen.

What was most disappointing about Taylor Storm’s story?

The narrator he sounded like he was straight reading instead of performing the characters to make them come alive.

What didn’t you like about Bradley D. Barnes, MBA’s performance?

Was Who Deceives Whom?: The Art of Trickery and Deception worth the listening time?

I didn't mind but glad when it was over.

This audiobook was provided by the author, narrator, or publisher at no cost in exchange for an unbiased review courtesy of AudiobookBlast

Who Deceives Whom? The Art of Trickery and Decepti

"This audiobook was provided by the author, narrator, or publisher at no cost in exchange for an unbiased review courtesy of Audiobook Blast."

This plot was way too convoluted for me. I didn't find it humorous or even ironic. I wasn't able to like any of the characters.


The narration was ok, the voice was pleasant.

This story has great potential but unfortunately there are problems with the narration that detract from one's listening pleasure. For example, the narrator fails to pause most times between change of scenario and this is very confusing for the listener. Then he seems to read almost all of the sentences as if he were asking a question. Unfortunately this spoilt the listening for me.
This audiobook was provided by the author, narrator, or publisher at no cost in exchange for an unbiased review courtesy of AudiobookBlast dot com.