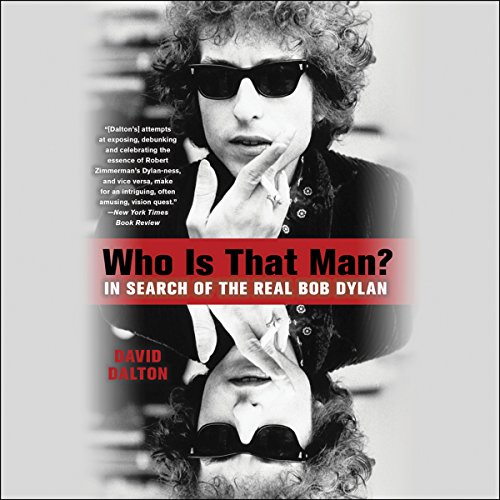 Who Is That Man?

Written by: David Dalton
Narrated by: Jeremy Arthur
Try for $0.00

Now with a new foreword, a kaleidoscopic look at the many faces of Bob Dylan, legendary folk singer-songwriter and winner of the 2016 Nobel Prize in Literature.

For almost half a century, Bob Dylan has been a primary catalyst in rock's shifting sensibilities. Few American artists are as important, beloved, and endlessly examined, yet he remains something of an enigma. Who, we ask, is the "real" Bob Dylan? Is he Bobby Zimmerman, yearning to escape Hibbing, Minnesota, or the Woody Guthrie wannabe playing Greenwich Village haunts? Folk Messiah, Born-Again Bob, Late-Elvis Dylan, Jack Fate, or Living National Treasure? In Who Is That Man? David Dalton - cultural historian, journalist, screenwriter, and novelist - paints a revealing portrait of the rock icon, ingeniously exposing the three-card monte games he plays with his persona.

Guided by Dalton's cutting-edge insights and myth-debunking point of view, Who Is That Man? follows Dylan's imaginative life, integrating actual events with Dylan's words and those of the people who know him most intimately. Drawing upon Dylan's friends and fellow eyewitnesses - including Marianne Faithfull, Allen Ginsberg, Peter Stampfel , Larry "Ratso" Sloman, Eric Andersen, Nat Hentoff, Andrew Oldham, Nat Finkelstein, and others - this book will provide a new perspective on the man, the myth, and the musical era that forged them both.

What listeners say about Who Is That Man?

For Dylanologists and other Dylan nuts

I don't know why I read (or listen) to so many Dylan books. But, I do.

For me, he's way more than a song and dance man. He's really an artist of the first order. This book was sometimes cynical about Dylan, which made it more interesting. Some are not. If you're looking for your first Dylan book, this would be a good starting point. If you've covered some of this territory before, you might still enjoy the brisk pacing.

Would you listen to Who Is That Man? again? Why?

Any Dylan fan who cares about why he does something than what ice cream he ate.

What was one of the most memorable moments of Who Is That Man??