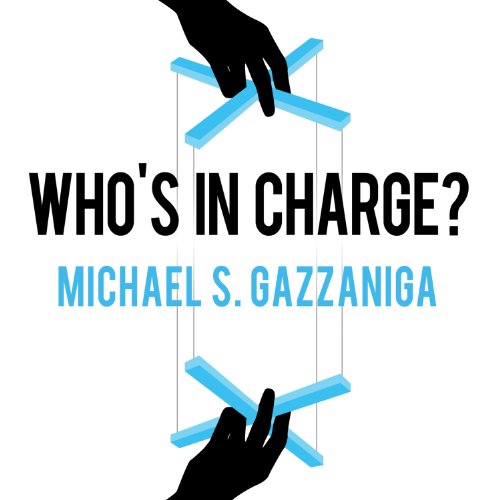 The father of cognitive neuroscience and author of Human offers a provocative argument against the common belief that our lives are wholly determined by physical processes and we are therefore not responsible for our actions.

A powerful orthodoxy in the study of the brain has taken hold in recent years: Since physical laws govern the physical world and our own brains are part of that world, physical laws therefore govern our behavior and even our conscious selves. Free will is meaningless, goes the mantra; we live in a “determined” world.

Not so, argues the renowned neuroscientist Michael S. Gazzaniga in this thoughtful, provocative book based on his Gifford Lectures - one of the foremost lecture series in the world dealing with religion, science, and philosophy. Who's in Charge? proposes that the mind, which is somehow generated by the physical processes of the brain, “constrains” the brain just as cars are constrained by the traffic they create. Writing with what Steven Pinker has called “his trademark wit and lack of pretension”, Gazzaniga shows how determinism immeasurably weakens our views of human responsibility; it allows a murderer to argue, in effect, “It wasn’t me who did it - it was my brain.” Gazzaniga convincingly argues that even given the latest insights into the physical mechanisms of the mind, there is an undeniable human reality: We are responsible agents who should be held accountable for our actions, because responsibility is found in how people interact, not in brains.

An extraordinary book that ranges across neuroscience, psychology, ethics, and the law with a light touch but profound implications, Who’s in Charge? is a lasting contribution from one of the leading thinkers of our time.

"A fascinating affirmation of our essential humanity." ( Kirkus)

What listeners say about Who's in Charge?

Use Your Credit On "Who's In Charge"

For those who want to make a quick decision, just read the above headline. For those who would like to thoroughly research this book before committing, go to the FREE "Brain Science Podcast" and listen to episode # 82. (In fact, if you are at all interested in the Mind/Brain, I strongly suggest you subscribe to this Audible sponsored podcast. It led me to this wonderful world of audiobooks.)
For those in between, here is my take on it. Dr. Gazzaniga is the father of research into split brain patients (this procedure for epilepsy has been replaced by less damaging ones, so there will be little research in the future). His work seems to have heavily influenced our present understanding of the brain, and a lot of that understanding is presented in this work. While I thought I knew quite a bit for a layman, there was not one part of this book that I could skip through, all of it was engaging, even the familiar parts. While there are other books I could recommend that specialize in certain areas, "Who's In Charge" covers most of the current popular topics, such as Self, Consciousness, Free Will, and Morality and touches on Chaos Theory and Emergence. To me, there were no low points here. nor is anything too complicated for the unitiated. I cannot see anybody being disappointed in purchasing this book, and believe you could have saved time and effort, by just following the advice in the headline.

Good brain book, not really about free will

Although the author purports to address the issue of free will from a neuroscience point of view he goes off on many, many tangents and is oddly reticent to make any firm assertions.

He gives a good tour of the current state of what we understand about how the brain works. This is meant to set the stage for addressing the question of whether brain chemistry and wiring pre-determines out decisions or if free will really exists. However, although he asserts that he thinks free will exists he does not create any structured arguments to support his belief. Either he feels the evidence speaks for itself (in which case he has over-estimated his audience) or his hypothesis never crystallized in his mind.

As an experienced neuroscientist he has a masterful grasp of the subject (although I found his frequent, parenthetical comments of "so-and-so, who worked in a lab across campus from me" did not add anything to the story.) Not only does he understand what he is writing about, but he has thought deeply about the implications and he presents the material accurately.

I found the performance to be rather snarky and it distracted from the text.

The survey of current neuroscience makes the book worth reading, but I think he does a disservice to claim the book is about free will.

This was a good book. There were two or three really mind-blowing concepts that I hadn't heard before. But I give it fewer stars because (1) it doesn't really spend very much time on the titular question -- specifically "free will". It's really a book about how the brain works, which is really interesting to me, but this book's not as good as David Eagleman's "Incognito", in my opinion. (2) It spends quite a bit of time on how current neuroscience impacts law and courtroom proceedings. Those parts seemed repetitive and dull to me.

Not for Everyone, but Definitely for Some of Us

This book is not the kind of thing you want to get distracted from while listening. It's rather technical at certain points. Even if you listen perfectly, you may have the sense from time to time that you must have missed something.

I realized while listening that I've read a lot recently about moral psychology, rationality, evolution/epigenetics and neuroscience, so there was a lot of material I had read or heard before. If you've been keeping up with Jonathan Haidt, Stephen Pinker, etc, you'll already be familiar with a good bit of what's here. However, if you are interested in one of these subjects and haven't read up much on them lately, I think you'd enjoy the book.

The author's tone of voice is ... well, hilarious. It's like a man reading with a perpetual smirk while waiting for his next martini to be stirred, not shaken, because he knows, thankyouverymuch, that you don't shake martinis, for the love of all that's holy. (I've done my best to give you a sense of his voice in the text I've written -- a nearly impossible feat, but if you have a listen, you might see what I mean.) I'd choose to listen to this reader again, but I have a feeling his tone is not for everyone.

There's a lot of technical stuff. You may or may not remember as much as you'd like once it's over, but it's a good overview of where we are with understanding consciousness in the early 21st century. Also, it's not a terribly long book, and the illustrations are often amusing, so it's worth taking a chance on, IMHO.

Brain expert Michael Gazzaniga uses physics, psychology, neurology and sociology in this fascinating and enlightening argument that we are, in fact, in charge of our own lives. Like Daniel Dennett in Elbow Room and Steven Pinker in How The Mind Works, Gazzaniga addresses the problem of the supposed "deterministic" nature of the physical universe and how it is that we escape moral determinism in our decision making, living in this world and having a brain made of matter. He puts to rest what Dennett calls a "philosophical bugbear" with wit and good sense, showing us what we really knew all along--despite the physical nature of our brains, we are in charge of what we do with it.

This book was very academic. Down to the siting of references every few minutes. I have a masters degree but found a lot of the content to be over my head.

Maybe neuroscience isn't the best topic to listen to. I just didn't find myself eager to listen after a while. I was most attentive when he talked about specific examples with patients, moral dilemmas, split brain patients, how the interpreter comes up with absurd explanations for situations, and bizarre brain disorders. Too much detail, and not enough of a compelling storyline in my view. But I guess that's just how my brain perceived it, ;-)

Evolutionary thinking is so out of touch with the reality that we were created. PraiseHim

Expert explains it to the rest of us

The author speaks with authority when he describes the working of the mind. Many of the other books I've been reading recently had mentioned the author's experiments on the hemispheres in the brain and how the mind works. Often, a primary researcher is not gifted at explaining, but Gazzaniga is.

In the book he does cite an official definition of consciousness that states that there are over 10000 scientific articles about consciousness and none of them add to our understanding. Who we are and what we are is just not easily understood, but this book does bring me closer to understanding.

The book also delves around a little with quantum physics and evolution. As usual, when an expert in another field, in this case neuroscience, and writes well in his own field, he writes even better when talking about other fields.

The book won't appeal to someone who wants absolute answers, because the understanding of the questions he is addressing are still fuzzy. Anyone, whose interest about neuroscience has been aroused and wants to know more about the right left brain will enjoy this well written book.

You Didn't Do It Alone?

Michael Gazzaniga (Psychological Science; Cognitive Neuroscience; The Ethical Brain) now has produced Who’s in Charge? Free Will and the Science of the Brain. Gazzaniga is a well known expert in cognitive neuroscience, but this book makes the topic easy to follow and readily available to anyone willing to turns its pages. Most important, this book brings neuroscience and philosophy together. The result is a deeper understanding of free will as experienced (or thought experienced) by individuals. Gazzaniga would have been more helpful to me had he defined what he means by free will. I would have greatly benefited from having such a guide post. Such context would have been helpful. Nonetheless, the book is thought provoking and helpful from both the philosophical and the neuroscience perspectives. It will certainly make the reader stop and think. The reading of Pete Larkin is well done.