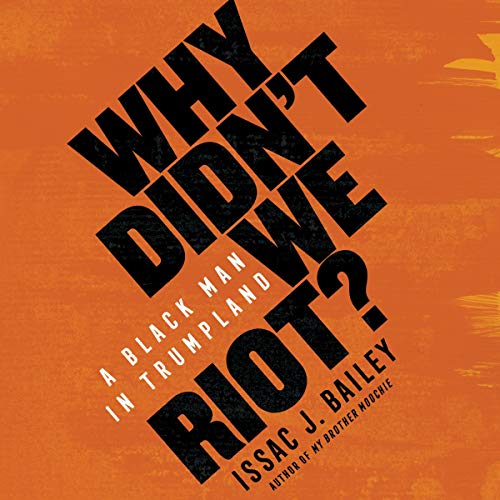 Why Didn't We Riot?

In these impassioned, powerful essays, an award-winning journalist deals forthrightly with what it means to be Black in Trump's America.

South Carolina - based journalist Issac J. Bailey reflects on a wide range of complex, divisive topics - from police brutality and Confederate symbols to respectability politics and white discomfort - which have taken on a fresh urgency with the protest movement sparked by George Floyd’s killing. Bailey has been honing his views on these issues for the past quarter of a century in his professional and private life, which included an eighteen-year stint as a member of a mostly white Evangelical Christian church.

Why Didn't We Riot? speaks to and for the millions of Black and Brown people throughout the United States who were effectively pushed back to the back of the bus in the Trump era by a media that prioritized the concerns and feelings of the white working class and an administration that made white supremacists giddy, and explains why the country’s fate in 2020 and beyond is largely in their hands. It will be an invaluable resource for the everyday reader, as well as political analysts, college professors and students, and political consultants and campaigns vying for high office.

“[Bailey’s essays] are incisive as they confront the realities of systemic racism in America...essential reading.” (Foreword Reviews)

“In Issac J. Bailey’s book, James Baldwin meets James Bond - that is, Bailey performs a kind of racial spy mission, bringing back intelligence from deep in Trumpland about the kind of thinking that continues to have disastrous consequences for our country. Why Didn’t We Riot? is a very important book.” (Clifford Thompson, author of What It Is: Race, Family, and One Thinking Black Man’s Blues)

“This is such a timely book, delivered into our hands at precisely the moment when we are reckoning with the cruel legacies of racism and inequality in a manner we never have before. A searing, honest, and essential read for anyone who wishes to know how we got here, and how we might escape.” (Tope Folarin, author of A Particular Kind of Black Man)

What listeners say about Why Didn't We Riot?

Isaac Bailey's collection of essays are well written arguments showing the underlying racism and racist motivations behind the election of what history will show was the most unfit person to ever hold the office of U.S. President. My only quibble with the author is that it downplays the multifaceted reasons for Trump's election...there was, and is, more than race at play. But the choice of millions to minimize the former president's blatant racist language and actions needs to be understood and compared. Bailey's work is a step in that direction! White people (like me) need to listen.

Thoroughly enjoy listening to this book. Exceptional reading. Best I've heard yet. A bit baffled though. Did I miss it or was the title question not answered?

Strong Beginning, Contradicts themselves at the end

This book had a strong beginning and was relatable to my experience as a Black man living in Trumpland. It clearly explained the challenges faced by Black people living in conservative areas. How often a Black person has to make strategic moment by moment decisions to successfully navigate Whiteness. However the author made a strange and hard pivot when they discussed the Black electorate shoehorning unnecessary comparisons of Louis Farrakhan and Al Sharpton to Donald Trump. It was a bizarre shift from truth telling of the Black experience in Trumpland to trying to appease potential White readers that Blacks can be racist too. Then the book discusses a court case that addressed the issue of race in the South but in a way that seemed forced, almost as if it was a passion project that he wanted to share in detail but did not fit. Overall, I will definitely draw upon his personal narrative and experience shared in the earlier chapters in the book as it properly frames the challenges and issues faced by Blacks in Conservative areas within the United States. However, I think it it is problematic and disappointing to undercut the important contribution that was made by this book by centering the racist perspectives of White liberals rather than focusing on how Blacks might thrive in Trumpland in spite of the entrenched obstacles that we face.