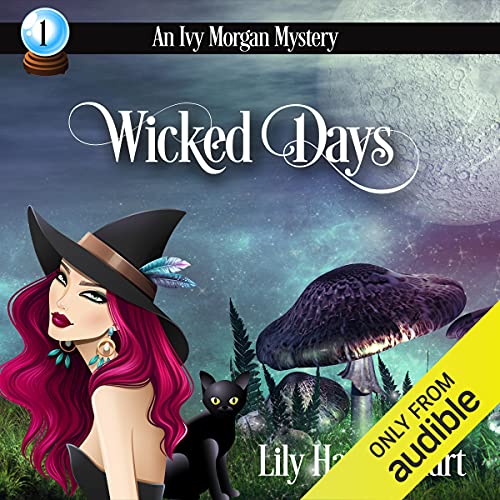 Ivy Morgan is happy with who she is, and what she can do. She certainly doesn't need to second guess her life, or her witchy ways... that is, until Shadow Lake's newest police detective enters her life.

Jack Harker is haunted by a past he refuses to talk about, and he's not looking forward to a future with anyone - especially a sassy witch with boundary issues.

Jack and Ivy find their paths crossing on a regular basis when a dead body is discovered on the edge of Ivy's property. Jack doesn't want any romantic entanglements, but there's just something about Ivy that keeps drawing him in.

When the truth is finally revealed, Jack has to decide what he believes - and he has to do it before a murderer turns his attention to Ivy.

Can Ivy heal Jack's wounds? Will she even get a chance to try?

What listeners say about Wicked Days


I love cozy, paranormal mysteries. I am always looking for different ones to try. I saw this book and was on sale so i decided to give it a try. Boy was i disappointed. First the voice of Bryan really was awful. It seemed like he was screaming but hesitate. The characters seemed Juvenile. I felt like i was reading but teenagers and not grown men and women. I probably won't read anymore of these.

Compelled to write this review

What would have made Wicked Days better?

Would you ever listen to anything by Lily Harper Hart again?

No. Perhaps if there was a different narrator, I might try it. The story was somewhat interesting but the writing didn't seem very professional. The detective work in the story was very flimsy.

The narration detracted very much from the story. She didn't pace the sentences cohesively. At times one sentence or thought was expressed as 2. There was distinction in the male and female voices except that all except for the hero they were like they were shouting and forced or squeaky and hard on my ears. The pacing of the expressions was not done well either.

What character would you cut from Wicked Days?

The women chasing after her brother. It was not necessary to include dialog with them especially since that dialog was also grating.

I gave the story 2 stars because there was some entertainment to it. I rarely if ever give bad reviews. Usually I just ignore giving any feedback in those cases. However, I think this narrator has possibilities if she gets more training. I definitely felt she really liked this story.

I really enjoyed the story -- of this volume, as well as the rest of the series -- but Angel Clark's narration made it painful to listen. Her high-pitched, shrill, and whiny rendition of the main character, Ivy Morgan, made Ivy seem an incredibly immature, empty-headed, petulant 12-year-old. Her idea for making the Police Chief distinguishable from other characters was to utter his dialog in a screaming voice, speaking as if he were a brain-damaged dunce in a child's cartoon. I doubt the author intended that for either of her characters. How Angel Clark gets jobs narrating is beyond me, as I've heard other samples of her reading, and the voice is always the same high pitched, whiny, shrill noise used in this volume. She must be related to someone well-placed in the publishing business, because she surely isn't being hired for her talent. Although I enjoy Lily Harper Hart's writing, I won't be purchasing any other volumes that are narrated by Angle Clark. It's just too painful and annoying to hear ... what a shame that a good author has to suffer for a choice over which I doubt she has any control.

Need a new voice for narration .

I may enjoy the book but I don't enjoy the narrator. She makes it hard to listen to. She makes the male parts all sound like children.

May have been good

I think this may have been a good book, however the narration was so awkward I was unable to finish it.

I couldn't get past 10 minutes of this. The narration is robotic, the sound is cheap. If it's a good story I will never know because production sucks.

Not the paranormal I was expecting from the cover.

Would you try another book from Lily Harper Hart and/or Angel Clark?

Maybe, if there is a sale.

The narrator made the heroine so darn whiny. Ugh! A bit of inflection and emotion would have helped tremendously.

This was an okay story. I was able to finish is but Predictable mystery with many details left for upcoming series. This is NOT a paranormal, which is what I was expecting. The narration was seriously just okay. I have heard much worse and MUCH better.

Narration is what made me stop

I couldn't continue listening to the book. I wanted to know what happened but the narration stopped me. The characters seem juvenile and Angel Clark makes them sound whiny.

Thought the storyline seemed interesting, but the writing was very elementary. I think I would’ve enjoyed it if it weren’t for the terrible narrator. I’ve never had a narrator that actually grated on my nerves more than this one.

This narrator should not perform men's voices -- they sound angry or robotic. I'll be sure to avoid her in the future.