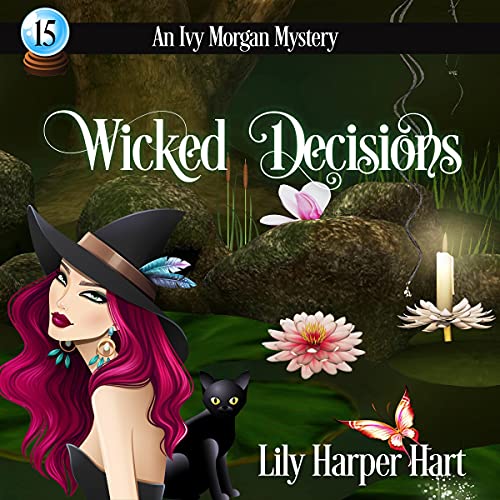 Ivy Morgan is getting married, which means she needs a dress. Now that she’s finally embraced the idea of planning for the wedding (rather than just enjoying the marriage and honeymoon), she’s gung-ho to check things off her list.

The local dressmaker Zelda Morris has just the thing for Ivy. Before she can show it to her, though, she’s murdered in the back of her own store while Ivy waits for her to return to the storefront. Unfortunately for Ivy, because she didn’t hear a thing, that makes her a suspect.

Jack Harker isn’t happy with the turn of events. He knows Ivy is innocent, but he’s in a precarious position. If word gets out that he’s protecting his fiancée, then the Michigan State Police could take over the investigation, and he’s worried they might fixate on Ivy. That means he has to dig deep for answers...and what he finds is troubling.

It seems Zelda was only one of a multitude of women dating local lothario Henry Spencer, a man who has more girlfriends than brains. One of those girlfriends happens to be Ivy’s aunt, Felicity Goodings, which means the long eye of the law falls directly on both of them.

It’s up to Jack and Ivy to untangle a mess of motives and suspects, which include her beloved aunt. That causes issues with Ivy’s mother, who is loyal to her sister to a fault.

It’s a tense time, and it only gets worse when Ivy decides to embrace her magic and use it to solve the case. There’s a killer on the loose, and Ivy might be a target because she can’t keep her nose out of trouble. She needs to discover a killer, avoid this individual’s wrath, and continue planning her wedding if she wants a happily ever after. It’s going to be a tall task.

What listeners say about Wicked Decisions

Love Jack and Ivy and the rest of the gang

Keep the stories coming. They are a great escape. they are well written and fun to listen to.

Fun story. Lots of surprises. Sometimes a little bit too much whining, gets old fast. I love this series and characters. Just some parts get to be too much.

This was a great easy listen. Ivy is preparing for her wedding as a murder occurs in the next room. The suspects are many, and one hits too close to home. Ivy’s new powers are developing, and she’s finally grasping the idea of being a witch. In typical Ivy fashion, what could go wrong? Fun book!

Good, but I didn't care for the ending

Loved the story up until the ending. I don't want to give anything away because I know most people have not had the opportunity to read it yet due to the fact that the audible was released early and the Kindle will not be out for a few more days. However, I found the the ending ridiculous , unfair and unbelievable. If I were Ivy I would not be speaking to Jack or Henry for a very long time.