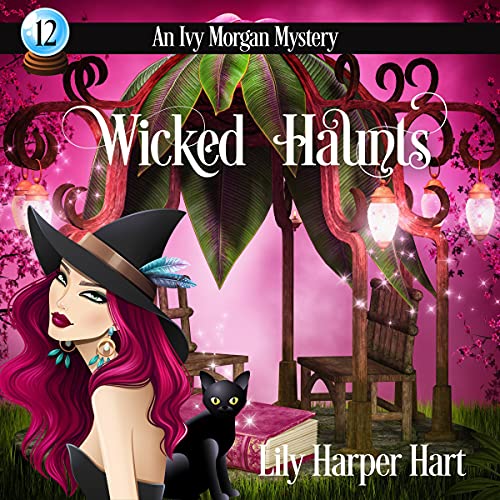 Things only become more and more convoluted when Ivy and her fiancé Jack Harker trip (almost literally) over a missing person’s case while out hiking. When a mysterious purse shows up at a ramshackle home from an era past, they follow a young woman’s trail to her mother’s house...and find a dead body.

Janice Green was a nice woman with a grown daughter who survived the embarrassment of her husband leaving her for her best friend years before. Janice’s death leaves more questions than answers, and the race is on to find her missing daughter.

Ivy has her hands full when visions start popping into her head and she keeps catching sight of a woman who has no business hanging around Shadow Lake. Even though she’s afraid of what’s happening, Ivy is determined to get a handle on things...even if only because a young woman’s life hangs in the balance.

Shadow Lake is a small town, and some of the residents have big secrets. It’s a race against time to find a dead woman’s daughter, and Ivy and Jack are going to have to work together if they plan to find the answers they so desperately need.

Magic and might are about to mix, and the outcome is bound to be explosive.

What listeners say about Wicked Haunts

so, im told that ms Lee and LHH, are 2 entirely different ppl. but im still wondering about that. in ms Lee's Stormy Morgan series, Phoebe Green is Stormy's arch-nemesis. now, in this LHH, Ivy Morgan book, there's a[nother] character called... yes, Phoebe Green. which is, of course, a Friends cross of Phoebe Buffet and Rachel Green. there's also a Ross character in this one!=)
..seems a little suspect to me...
.. things that make ya go 🤔...
💗💗💗

Won't sync with digital e-book and Amazon techs don't have a clue. They keep you on the phone for hours when they don't even understand the concept of dead and listen. By the time they are convinced to transfer you to Audible you are too tired to try and find the direct phone number when they disconnect you. The concept worked better when it was first developed, however, all of the changes that have been made have ruined it. It shouldn't matter when the book was purchased, if Whispersync is advertised it should work. If it happened occasionally that you can't get the e-book and Audible book to load and sync at the same time, that would be bad enough but the problem has become the rule rather than the exception. It is tantamount to false advertisement and your staffs basically say tough luck. Very unsatisfied customer.

I loved this series, she is a great author, and I hope their are more stories.

AS ALWAYS, A GREAT MYSTERY!! CUTE COUPLE AND SWEET ROMANCE! LOTS OF TWISTS AND SURPRISES!! SO MUCH FUN!! LOVE THIS SERIES!!

I loved this book. I love seeing Ivy come into her powers and finding out that as amazing and loving as her family is there are still some secrets to be told. Can't wait for Ivy and Jack's cruise.

This is one of the best in series

I like Ivy and Jack better and better. Ivy’s powers are finally getting stronger. I look forward to the next one. I enjoy Angel Clark’s narration too.