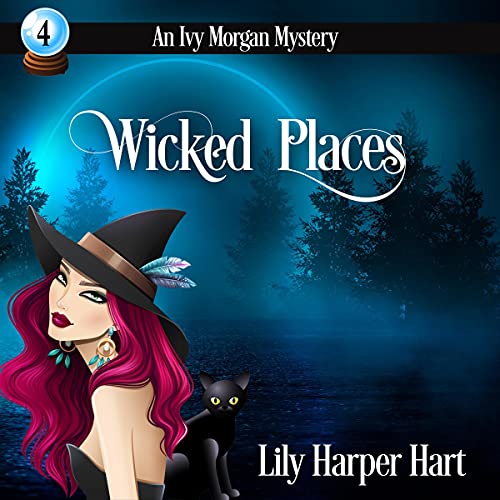 Detective Jack Harker is going on vacation, and he wants his witchy new girlfriend Ivy Morgan to go with him. He just hasn't asked her yet.

When he finally gets up the courage, Ivy agrees to a weeklong camping trip with Jack's former police academy friends and their wives. Since Jack has never been camping, he needs Ivy for more than just company - he also needs her to teach him a few things about surviving in the woods.

Once they get to the campsite, Ivy finds she fits in fine with the men - even though one of them seems interested in more than just friendship - but the women are a little more hostile.

When a teenage girl goes missing from the campground, Ivy is the one to find her body and become a suspect.

Things only get worse when one of Jack's friends starts displaying suspicious behavior, and then his wife goes missing.

Between the local hermit who claims it's Bigfoot, and the peculiar animal tracks showing up, Jack and Ivy have their hands full.

When the truth is finally revealed, Jack has to decide if he can trust the people he calls "friends" and whether he can get to Ivy before she becomes the next victim.

What listeners say about Wicked Places

The story and the narration was fun and full of energy a little witchy trouble ensures. you will be sure to like this.

KEEPS YOU ON YOUR TOES!!

If you could sum up Wicked Places in three words, what would they be?

ARE YOU KIDDING!? THIS WAS AWESOME!!! THERE WAS SO MUCH EXCITEMENT AND MYSTERY! I LOVED HOW THERE WAS ALWAYS SOMETHING AT EACH TURN AND IT KEPT YOU WONDERING AND SO ON THE EDGE OF YOUR SEAT!!! TOO MUCH TO PUT INTO ONLY 3 WORDS!!! LOL

YES!!!! YOU FELT LEAD ONE WAY IN THE STORY AND THEN, POW!!! LOOK OUT, SOMETHING NEW AND UNSEEN!! IDEAS THAT YOU COULD NEVER EVEN THINK UP OR IMAGINE!!

EVERYTIME JACK AND IVY WERE ALONE!

THERE WERE SEVERAL AND ALSO MANY TIMES I WAS LAUGHING OUT LOUD!!

I LOVE THIS SERIES!!! IT IS SO MUCH FUN TO LISTEN TO. ANGEL CLARK IS OUTSTANDING!!! SHE BRINGS IT TO LIFE!!

Good story line, I love the growing relationship of Ivy and Jack, and their psychic connection. Once again Ivy is in the sights of a killer.

This is my first Audiobook in this series, I took me a minute, to get used to the narrator's voice. It was not the voice I had in head, when I read.

I would recommend reading this book and series.