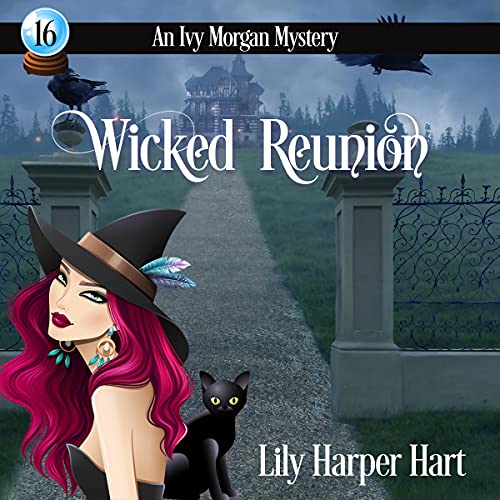 Ivy Morgan was convinced she was heading toward a smooth future, until she was arrested and charged with criminal trespass. Sure, she was saving a woman from certain death at the time, but in order for the criminal case to hold up against a murderer, she has to face the music.

Fear is the one thing Ivy hates more than anything else, so in order to make herself feel better, she decides to fix her Aunt Felicity’s love life. That includes tracking down an old love...who just so happens to have set up shop one town over.

While visiting, Ivy is horrified when a battered woman straggles through the door and is immediately shot dead by a masked man. Traumatized and horrified, she calls her fiancé detective Jack Harker for help. By the time he arrives, though, things are already spiraling out of control.

Ivy was always a good girl - although sometimes with a bad attitude - but now, she’s a murder suspect, thanks to some overzealous police officers and a criminal record that’s fresh in the minds of everyone concerned.

Jack is determined to protect Ivy, but there’s only so much he can do. That means he needs to work with her to solve the crime. Otherwise, it could haunt them for the rest of their lives.

Who would be so brutal, though? That’s the question of the day.

A dangerous game of cat and mouse is afoot, and it’s going to take both Jack and Ivy working together to figure it out.

What listeners say about Wicked Reunion

I enjoy listening to these books however I find the subtle messages annoying. I think Jack is overly needy and insecure. He doesn't allow Ivy to breathe enough. Anytime she tries to assert her independence, he becomes controlling, obsessive, and upset. Ivy is a talented, passionate, and curious woman who has the gift of helping others while solving murders. I think that she'd be a great P.I. Jack has a very unhealthy personality. Anytime anyone teases, looks, or comments about Ivy he reacts angrily and wants to lash out. I'm not saying doesn't have a sweet side nonetheless it's at the cost of controlling his partner. I'd hate to see how he reacts to sharing Ivy with their kids. I like the creativity of the plots. I do think the author is redundant in some areas of each book. I think a recap should only occur once and not throughout the book again. The narrator does a good job with the material she has been given. If you enjoy magical mysterious monogamy then this series is a great escape!

after 16 books.. you truly just love these characters. I can't wait for their next adventure! Another 5 star book and preferences!!!

love Ivy and Jack and all the characters in this series. Need to give the cat some powers.

I Always Ivy and Jack’s adventures

I will keep buying these comforting cozies as long as Amanda M Lee keeps writing them! I will re-listen to the whole series to take me temporarily away from these tough times .

Loved how this book introduced us to Dorian. Would have liked some time with Amy and JJ but there just wasn't room. Getting close to the wedding.

everything I have read by amanda m. lee has been entertaining, fun, and great reading. it always makes me laugh out loud

Another fun story and lots of surprises! This series is always a great time with many laughs!