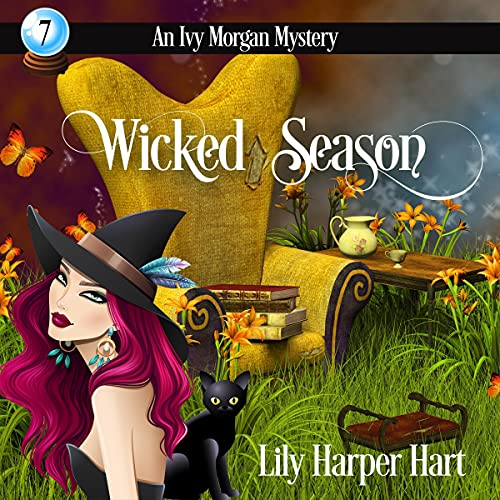 Ivy Morgan is convinced life couldn't get better. She's happy, in love, and since fall is her favorite season, she's having a great time with the shifting weather. All of that changes when her boyfriend's mother and sister show up out of the blue and cast her life into disarray.

Jack Harker has never been happier, and even though he loves his mother and sister, he's not thrilled with their arrival. Things only get worse when Jack's mother starts making demands, and the biggest one is that Jack cut his time in Shadow Lake short and return to southeastern Michigan.

Ivy's good mood turns sour quickly despite Jack's insistence that he has no intention of leaving. Despite the upheaval, Ivy does her best to get to know Jack's family. Things spiral out of control when danger hits town...again.

When a local farmer is found dead on his property, Jack and Ivy find themselves embroiled in a dark mystery of epic proportions. The clues go back years and the suspect pool is unnaturally large given the number of workers on the farm.

Ivy is going to have her hands full. She has to charm Jack's mother, find a murderer, and keep herself safe. When the end comes, Ivy finds herself saddled with an unlikely ally while Jack is fighting a battle against time to reach the woman he loves before a killer can snuff out their happily ever after.

What listeners say about Wicked Season

I tend to gravitate towards series because I enjoy getting to know the characters and love watching them grow and evolve as they tackle challenges. This book shows Ivy getting to know Jack’s mother and sister. Overall it was a good little book but several things really bother me. For example, Ivy cooked a specific dinner for Jack’s mother and sister. Two different versions of the same dinner were left in the book, back to back. They finish eating dinner and then start all over again. Two other things about this series/book bothers me. In the first or second book, Jack said his sister was a vegan. In this book, his sister picks at Ivy for being vegetarian. Also, Jack tells his mother (in this book) that he rents his home by the month. Later on, he says that he rented the house for a year. These little details really irritate me because they distract from the story. I expect the editors to have corrected these mistakes before the book hit print/audio. Oh well. It stinks but I will keep listening anyway! :)

technical issues chapters out of order

audio has technical issues chapters 11 and 12 are out of order. otherwise just as entertaining as the previous audio books.

Ivy is a Saint

This story reminds of the AITA stories on Reddit. Ivy is definitely NTA. Powerful, dark story. What started as a fluff paranormal cozy series has gotten darker lately and I LOVE that.

Lily does it again!!

love these books. snarky, no gratuitous sex scenes, and decent plots. highly recommend all her series.