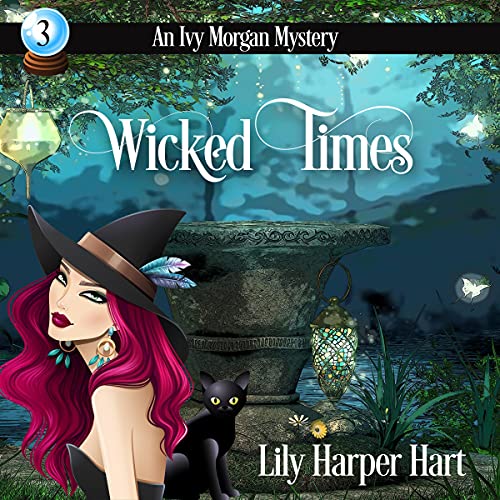 Detective Jack Harker and Shadow Lake's resident witch Ivy Morgan are finally on the right romantic track - and they're officially going on their first date.

While eating dinner in a neighboring town, a police officer is shot and killed on the street - and when the ballistics come back, Jack realizes his tortured past is still part of his tumultuous present.

Jack's demons are on display, and he's in danger from an old enemy's grudge and a current enemy's vengeance. He's worried that Ivy is going to be caught in the crossfire, and when those concerns come to fruition, he takes a step back

Ivy isn't a normal woman - or witch - and she's not about to let Jack go through this alone. When Jack can't stay away, and Ivy refuses to give him the space he only thinks he needs, this duo finally gives in to temptation.

Now they just have to survive - and save a lost soul in the process - to be able to look forward to a promising future.

What listeners say about Wicked Times

I've tried and others have tried and we still have a main character who is shril, picks nonsensical fights, insists she's can take care of herself, and is a strong, independent woman. She's none of those things. She's a shrill woose and instead of improving given the reviews, it's getting worse. And over 4 books her magic has barely advanced and her attitude is annoying. Worse, her childishness is being enabled and/or excused by all the characters around her. I give up. No more books from this series.

Story is predictable and characters lack depth. The narration is truly awful! Lead character is immature and mostly super annoying.

Ivy and Jack finally have their first date, albeit cut short with the murder of a fellow police officer. Now as Jack investigates this murder, Ivy's own life is in danger.

I love this storyline

while this isn't my favorite book in the series, it's important to their story arch. I love these characters. they're not perfect, but no one is. they're so realistic.

I enjoy this series. The stories are fun, engaging, and intriguing. I like the supernatural element. I also like that the whole family is involved in solving the mysteries.
I like how Ivy Morgan is written as a fun, passionate, and independent woman develops her inherent powers.
Also, I like how the characters play of each other.
My only complaint is how the writer infantilizes Ivy. Any time something dangerous happens Jack and her family members treat her like a child then become overprotective. I understand they are usually just worried for her safety. However, Jack takes it to a level of being obsessive. He often laments that if anything happens to her he couldn't live. He has an almost compulsive obsession with keeping Ivy safe like Golum. He doesn't like anyone teasing her or the fact that she dating anyone before him. It's quite unhealthy.
If you can get past that part of the story you'll find this an interesting read.