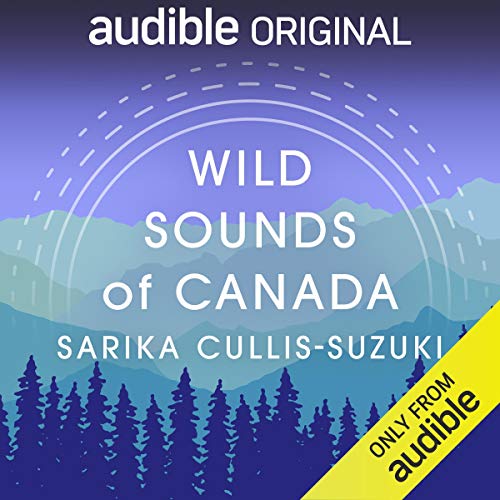 Written by: Various writers
Narrated by: Sarika Cullis-Suzuki
Try for $0.00

Sarika is passionate about the ocean, a sustainable world, and the conservation of biodiversity. She has served on various boards and committees including at the David Suzuki Foundation, WWF Canada, and the Shaw Centre for the Salish Sea. Recently, she has been a visiting scientist at Ocean Networks Canada at the University of Victoria, BC.

Sarika’s marine research has taken her to many parts of the ocean, from the high seas to remote tropical islands to the coastal intertidal zones of her home, British Columbia. Her PhD investigated the effects of boat noise on fish, while her MSc focused on overfishing in the high seas, the results of which she presented to the United Nations.

Sarika is committed to speaking out about ocean issues and conservation, and works in environmentally-themed media: she has written for magazines, books and newspapers, worked in radio, and has hosted documentary films for Parks Canada, The National Film Board, the Canadian Broadcasting Corporation, and Ocean Networks Canada. Most recently, she hosted two The Nature of Things episodes which aired in 2020: one on the fascinating world of intertidal zones, and one on the heartbreaking plight of orca. Sarika has been featured as Ms. Chatelaine, was named an influential Canadian Millennial by The Huffington Post Canada, and one of Canada’s Top 30 under 30 by Explore Magazine in 2012.

What listeners say about Wild Sounds of Canada

I enjoyed the sounds of the boreal forests and the haunting whale songs. The narration was enlightening about the different regions of Canada.

Brought back canoeing memories. Thank you. Great stress buster during lockdown. I learned so much.

Enjoyed listening to the sounds of nature in different areas of Canada, very good quality audios

Serindipity brought me here.
Absolutely amazing and so important and informative. Great narration. A+ Fabulous!

Author has done a great job sharing the narration

Author has done a great job sharing the narration , the sounds and the way they are captured is truly lovely

This serieis has everything. Great voice quality, relaxing, inspiring, educational and it is about Canada.

This is the best thing I've listened to on audible. Period. Sometimes I was brought to tears with the beautiful sounds of animals and nature, and the way Sarika narrated the stories of these creatures. If you live in Canada this with touch your heart even more. I thoroughly recommend this.

Amazing! When I listen to it, I feel like I'm floating in the air, observing lakes, mountains, forests... watching life all around me! Thank you, Ms. Cullis-Suzuki! I love it!

I was hoping this would be something nice and calming to listen to.
but once the narrator started talking, I was no longer relaxed. she has a nice voice, good for other reading. but not very soothing and kinda juts in.

Wonderful series with a gentle message

This is a wonderful series. It is well written, produced and narrated. Lots to learn as one travels from the Yukon east to Newfoundland and Labrador. The gentle message of climate change is presented in every episode without it being preachy. Just a reminder of the influences that we all have on our environment. Highly recommendable.

Perfect for my blind Father

My Dad loved visiting the National Parks. When he lost his eyesight he relied on us to describe what we were seeing. He loved this podcast. All of the animals sounds and sounds of nature. The narration was just enough to keep him fully engaged. Thank you so much! Please do more episodes!!!

I like listening to soundscapes as I go to bed. Wasn’t sure I’d like the narration but I loved this podcast. The animal noises are amazing and the narrator was really good.
I think this podcast would be especially enjoyable to little kids and feed their great imaginations.

Very Soothing to Listen to

Informative and relaxing at the same time. Love all the nature sounds and the narrator has a great voice.

One of the Best

Could not believe how much I looked forward to and appreciated the mastery of the narrator. Extremely enlightening and convincing.

Informative and just all around lovely

There was not one thing I do not like about the entire series. Sarika has the most calming voice. Production is outstanding. I have listen to all episodes many times and will listen many times more.
Closing my eyes I can see, smell and experience it all.

I hope there are other production from these people.

2020 was a tough year for most of the human world. How amazing that Sarika Cullis-Suzuki, Audible productions, and the sound recording team could take advantage of these months of human quiet to record the sounds of the natural world.

This may be the best thing to come out of 2020. Both these recordings, and the opportunity to acknowledge how *loud* our species is.

Despite the horrible circumstances of the pandemic, it’s good to know that the whales, bats, and birds had a year of quiet in which to talk with one another.

These recordings are a treasure.

The sounds of nature combined with the narrator’s voice are perfect bedtime soul soothers. Since there really is no story, I can listen to this multiple times and not lose the calming effect.

i liked each one. relaxing and pleasantly done.i wouldhear it again.thank you for posting this

definitely not a sleep sound

was hoping for a soundtrack if sounds of bird, waves, ect but it's more of a documentary aimed towards that of children or those without much knowledge of nature. Narrator doesn't have a soothing voice so is definitely not a sleep sound.

I thought it was a good listen. Short. I would have liked to hear how it was formed . A little more detail about the original people & how the Vikings then got to be there.