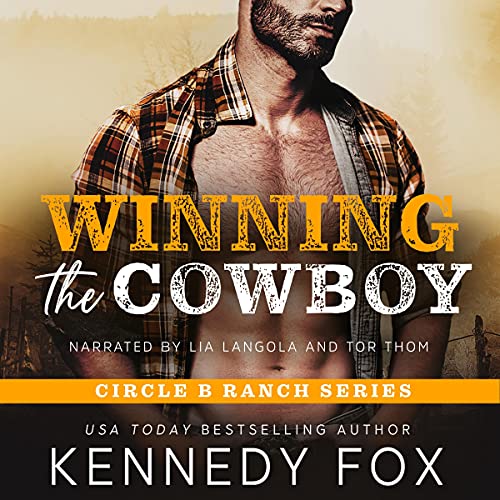 Working on the ranch and settling down is all Grayson's ever wanted in life. When he meets the woman who could make that a reality, he learns she hates him with every fiber of her being.

He knows she's being unreasonable since their bickering is the hottest foreplay he's ever had.

Mackenzie Bishop's an elementary school teacher and can tolerate a lot until it comes to Grayson. He may act like he doesn't remember what he did, but Kenzie will never forget. Not when the memory of that night still lingers in her mind years later.

She denies her attraction, but she can't hide it forever, especially when there's no escaping him.

Although she refuses to give him the time of day, one drunken night changes everything--just not in the way he had hoped.

Winning the Cowboy is a complete stand-alone and can be listened to without listening to any of the other books or spin-off series, but if you prefer to listen in order, start with Hitching the Cowboy as the characters and families do interconnect. Suggested for mature listeners only.

What listeners say about Winning the Cowboy

a fun and heartwarming love story

I absolutely love Kenzie and Greyson! Their chemistry is off the charts! this is my favorite Circle B Ranch book yet!

The Bishops and the Circle B Ranch, every single book just gets better and better! I never want these stories to end. Lia Langola and Tor Thom bring Mackenzie and Grayson to life and brings the fire between these two. The love/hate relationship between Mackenzie and Grayson and the shenanigans between them are fantastic. The incorporation of all the Bishops is awesome, it always takes me back to beginning and makes me want to revisit everyone. You can not go wrong with a Bishop story. The dynamic duo of Kennedy Fox bring you one amazing story.

I believe that Lia Langola is the perfect Kenzie Bishop and Tor Thom is the best Grayson!!! These narrators made this book even better than before. I am absolutely ecstatic that we finally found out why Kenzie has been mad at Grayson for so long and that it doesn't keep them from getting their HEA in the end. I think we all need some more dirty talking alpha Grayson in our lives,

Kenzie’s story! Kennedy Fox doesn’t disappoint. Kenzie is feisty and quick witted. She’s passionate and strong. Grayson met his match when he came to town. While it takes a long time for Kenzie to come clean with Grayson about why she had so much animosity towards him, the progression of their relationship after that point goes much faster. I like how everyone in the Circle B Ranch series is a part of the subsequent books. It shows the family aspect of the series and demonstrates the connectedness among the characters.

I received an advance copy of the e-book and a complimentary copy of the audiobook at my request and voluntarily left this review.

I absolutely loved listening to this book and finally getting to the bottom of what truly happened to make MacKenzie hate Grayson so much. Can't wait to find out what happens with the rest of the family. Kennedy Fox, Tor Thom and Lia Langola did an amazing job bringing the characters to life

If you want the full line up of characters start at the first book but this is a great standalone! There is everything that you want in an enemies to lovers romance with an amazing ending. I love how foster and adoption is brought up this is a first that I’ve really heard of that in these books but it’s just a great feel good book overall. Including all the romance your heart desires.

The narrators nailed this story! I loved listening to this come to life!

I love this story and the banter!!

Grayson and Kenzie will make you laugh so hard at the way they go back and forth. But the undeniable attraction is there under the surface.
I am not going to lie... I loved the drama that was in this story. It had just enough to keep you guessing and trying to figure out what was going to happen next.

Plus getting to see all the others from this world is a nice bonus.

This is a great enemies to lovers story!

Absolutely adored this one!

I absolutely loved this story! It was a fantastic read that pulled me in from beginning to end. This can be read as a standalone but if you have read the previous books in the series than you will have seen Kenzie and Grayson arguing and fighting from the beginning and not knowing why Kenzie has it out for him. It was great finally getting to learn the reason why this time. I loved getting to see these two prank each other until Grayson finally negotiates a truce where the truth comes out. This story will have you entertained and engaged from beginning to end as you wait to figure out what these two will be up to next. I loved getting to see them finally start coming together and building that relationship. This was a great read and I truly adored these characters. I can't wait to see what is going to happen with the rest of the Bishops this generation, especially a specific love triangle.
The narrators did a fantastic job with this as well. Great job with the voices and emotions that really just brought the story to life and added another element to it!

Finally! We get to know why she hates him

This is the 6th book in the series and these are really good for standing on their own, however you get so much more depth having read the whole series.

Grayson & Kenzie have been in the background of the series for so long. And I've been waiting for this enemies to lovers payoff. Especially since Grayson has absolutely zero idea what he did to tick off firecracker Kenzie like this.

Grayson came to Circle B after having his heart stomped on in a very dramatic family situation (which we learn in the prologue) so that he can have a fresh start. He leaves all that stuff behind him and comes to become part of the Bishop world. Yet, no one on the ranch knows what happened, he's completely separated his world into before and after.

At the time of this book, he's been working on Circle B for about 6 years and Kenzie's had a burr in her saddle since the day she lays eyes on him. We get to see their epic level prank war for a bit as they battle back and forth over time. We see moments from previous books and learn their context and see them from inside the heads of this couple instead of someone else from the outside.

This book really is all about building towards the reveal of why Kenzie is so upset with the thought of Greyson and then how they both deal with the situation once he finds out the reason. When everything is out in the open, will they flip from Enemies to Lovers?

It's a Kennedy Fox HEA guaranteed romance, of course they will!!!! But it's all about the journey, not the destination. And what an emotional journey it is.

The Audiobook for this story is performed by the deepness of Tor Thom and the versatility of Lia Langola. These narrators fit so well. Tor brought Greyson's humour to life and when the pain hits... you feel it. And his bedroom dirty talk is top notch. Lia Langola stole my heart with this one. Kenzie has this war going on inside her over Grayson and she brings it. But also, Kenzie is an elementary school teacher and that requires heart, softness and tenderness of spirit along with all the cute sweetie pie voices of the students. Every time Lia brings one of these kids (Bishop descendant or not) it made me melt.

I loved their story when I read it but I swear the audio made me love it even more. Even though Tor Thom has read the last few of these I feel like his portrayal of Grayson was on an entirely different level in this book.....it just seemed so much more. Maybe it is because of who Grayson is and the bantering that goes on between him and Kenzie. As usual Lia totally nailed Kenzie. She has yet to ever disappoint me when narrating a book. She is one of my favorites. I knew when I read the banter between the two of them that I was going to love it in audio.
Grayson and Kenzie are the epitome of slow burn. They constantly dance around each other and as much as Kenzie wants to hate him it becomes impossible.