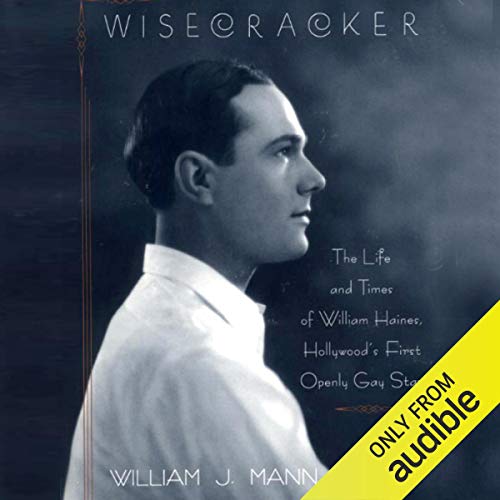 In 1930 William Haines was Hollywood's #1 box-office draw - a talented, handsome, and wisecracking romantic lead. Off screen, however, protected by a careful collaboration between studio and press, he was openly gay with reporters and studio chiefs alike. Here is Haines's virtually unknown story - rich with detail, revelations, and scandal - about silent movies and talkies; his lover Jimmie Shields, and their fifty-year relationship (Joan Crawford, their best friend, called them "The happiest married couple in Hollywood") and the enforcement of the Production Code and establishment of the Hollywood closet, which led to the blacklisting that ultimately doomed Haimes's film career.

Wisecracker sweeps from gay pool parties to the excitement of early talkies to Haines's infamous encounter with gay-bashing white supremacists in 1936. He survived the scandal to emerge as a top interior decorator to the stars and to such clients as Nancy Reagan and Walter Annenberg, who employed him for the American Embassy in London. With a cast of characters running from Tallulah Bankhead to Betsy Bloomingdale, from Clark Gable to William Randolph Hearst, Wisecracker is an astounding piece of newly discovered gay history, a chronicle of high Hollywood, and - at its heart - a great and enduring love story.

What listeners say about Wisecracker

Juicy, Thoughtful and One of a Kind!

I had little to no knowledge of "courageous" Billy Haines and author Mann told an involved historical tale superbly. As the audio book ended I found myself going to google to look for additional information. I found archived photos of Haines, his pals and his amazing decor at a website in his name. Someday we will have audio books that
feature actual archived voices counter poised against the authors rendering. Mann's book and it's narration came alive when Haines was quoted. In the meantime I am content to remember Mann's rich and thoughtful exploration.

A great listen, and very well told, however six crucial pages (11 - 16) that describe Haines’ school days in Staunton have been omitted! I replayed the chapter twice trying to find them, but finally resorted to a copy of the book to confirm they were missing.

A Story That Needed To Be Told

What a fascinating life! Yet so few people really know of William Haines today. The author is right when he states that when you come down to it, this is a love story of a couple who just happen to be of the same sex. No different than the great enduring marriages you hear or read about from the humblest to the mighty. Joan Crawford was right in stating that their's was "The happiest marriage in Hollywood."

If there was one thing that I'm at odds with, and even Mr Haines is guilty of this, is that William Haines is considered a film actor primarily in the silent film era who became a famed interior decorator. I see him as the opposite, a world famous interior decorator who earlier in life did some work in film.

I've seen some of his films and they are okay, with the best one being Show People. Even today, it holds up as being a very good film, and had Haines not been his own worse enemy and took acting seriously, he could have gone on to become a great character actor, even with his lost hair and this weight gain.

I think the book is recorded well, with the exception of glaring edits with variable sound quality.

A touching love story and a fascinating history of Hollywood

Bo Foxworth's warm reading style conveys the real affection that author William Mann developed towards William Haynes in the process of talking to his friends and family for this biography. Haynes' story offers amazing insights into the secret lives of Hollywood stars in the early days of silent films, followed by the transition to films with sound and the imposition of stodgy censorship of the movies. Mann skillfully describes how societal attitudes towards gay people went through many ups and downs over the decades, and how William Haynes was consistently open and forthright about his love for his long-time partner and his right to live his life as he saw fit.

Disappointed! Though it would be bio of William Haines without politics . As having interest in old Hollywood I thought it would be enjoyable like Charlotte Chandlers Not the Girl Next Door Joan Crawford audiobook. I made it into chapter 2 then had to skip to chapter 3 still not much better. Finally gave up. The snooty tone of the narrator finally did me in. The author probably started with history of William Haines but had to keep adding quips such as "when Reagan fired gay Staffers" or " their freedom was covered with a tarp until stonewall 40 years later, etc. ...the author seemed to want to do a history of gay activism. Boring nothing new. Same repeated stories everyone has heard for 49 years from activists with victim mentality.

Just because is not interesting

Just because he was the first openly gay movie star does not mean he was interesting. This book, though performed well, was simply boring....William Haines apparently did not do anything terribly interesting. Perhaps the good stuff is lost to time but in truth, he seemed to be Just a normal Joe who happened to be gay. Chapter 9 was basically a political commentary and overall, it was just a depressing, boring book.

Although many would file title under "gay interest" it is worth the time of anyone interested in classic Hollywood, MGM and the old studio system. There are great stories about Clark Gable, Joan Crawford, George Cukor, Cole Porter and more.

What other book might you compare Wisecracker to and why?

Have you listened to any of Bo Foxworth’s other performances before? How does this one compare?

Bo Foxworth does a great job with this title, doing different voices for the many people quoted, including William Haines, Clark Gable and even Anita page. The one problem is that he pronounces some names wrong, such as Dorothy Kilgallen. On a sidenote, the text briefly mentions Elizabeth Montgomery, who was the narrator's stepmother.

glimpse into the past

really enjoyed this view to the past. much of the narrative felt like speculation... but it was plausible enough that the underlying theme resonated with me. I recommend this book.

If you could sum up Wisecracker in three words, what would they be?

Billy Haines -- He kept true to his principles and was a courageous man in the face
of much prejudice, at a time when being openly gay was not tolerated.

Have you listened to any of Bo Foxworth’s other performances before? How does this one compare?

I have not heard Bo Foxworth's other performances. I felt he was excellent in this
book.

There were many moments in the book that were compelling, but one particular
moment stands out and that is when Haines had to make a choice on whether to
engage in a "Lavender wedding" or remain true to his partner.

I enjoyed this audible book very much and would highly recommended, which I have
already done to several friends. It is informative about a seldom talked about period
in the movie picture industry.

What made the experience of listening to Wisecracker the most enjoyable?

the book brought painted a vivid history of life in Hollywood from the early 1920's. I listened to it in black and white...I enjoyed every minute of it...and I liked Williams Haines very much. I was sorry when the book ended....