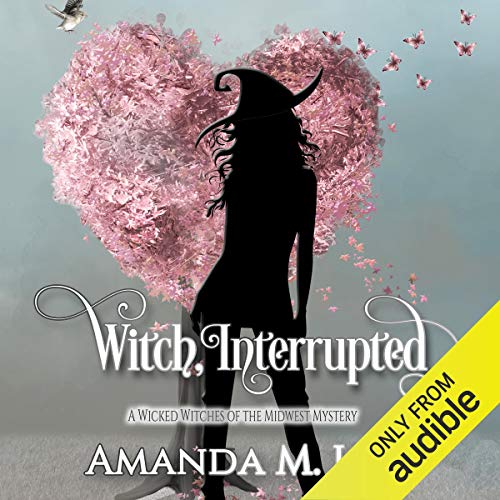 Things have been quiet in Hemlock Cove. That means the Winchesters are due to find trouble.

This time, the trouble comes in the form of a dead radio doctor who calls himself Dr. Lovelorn and fixes relationships in distress. Unfortunately for the Winchesters, if he can’t help his normal patients, he’s going to help them...whether they want it or not.

Love seems to be the topic of discussion, because in addition to searching for a murderer, Bay Winchester has her hands full dealing with another surprise. It seems Chief Terry, her favorite father figure, is dating...and he’s not opening his heart to her mother, as she expected.

Bay is trying to be mature, but she always thought Terry would officially become part of her family once the barriers were lifted. To make matters worse, Terry’s new girlfriend wants to be friends...something Bay can’t quite wrap her head around.

Thankfully for Bay, she has a murder to focus on. Since Dr. Lovelorn had his fair share of enemies - and a rather unattractive habit of getting too involved with his patients - there are numerous suspects to focus on.

Her expanding magic is also an issue, because she can’t quite get a handle on the ghosts that keep popping up...mostly because they’re mouthy and prone to fighting her efforts.
Basically, it’s going to be a busy week...if everyone survives to see the end of another convoluted case, that is.

It’s all witches on deck for this one, and things are about to get weirder than normal.

What listeners say about Witch, Interrupted

What's the matter with Bay....

...and Clove and Thistle? Is it just me, or have they have steadily become dumber and less stable with each book?

Just for the record, I have joyfully listened to every WWorM book and story. I feel like I know everyone in Hemlock Cove better than the people in my own hometown. That said, I really miss the girls the way they were back in the first few books. I know that good characters evolve and grow, but they don't usually become less sophisticated over time for no apparent reason.

In my opinion, the dumbing down of the Winchester girls is mainly due to Hollis McCarthy, the current Mystery series narrator. Back when Eris was narrating, the girls sounded like smart young women making their way in the world. As time went by and Ms. Hollis took over, they immediately started to sound spacey and immature. For example "but.." (a simple conjunction) became "buuuuut.. "(a drawn-out word used to give the speaker time to figure out what's going on and what to say next). Also, Thistle sounds like a big, dumb oaf, her sarcastic snark sounding like nothing but stupid comments. The narrators of the other sub-series (the Fantasy books and Shorts) don't use this interpretation of the word.

Even though I know it's sometimes necessary to change the narrator for whatever reason, but usually the narrator doesn't change the fundamental nature of a series' characters. I mean it seems clear to me that in this series, Ms.Lee has started writing to match the expected style of narration instead of the other way around. This narrator/author problem does not seem to be present in other series' by Ms.Lee.

I miss the smart, sophisticated Winchester girls. Maybe we need a change of narrator. Just saying...

Despite the previously expressed opinion, I must say I loved this book as much as any of the others. Go, Witches, go!

BTW, no real person could possibly eat as much BACON as Landon does. I mean, come on...

One of the better storylines

I enjoyed most of the storyline. I am unsure though,why Bay as a powerful witch, is portrayed as weak, insecure, whiny and needy. For me those personality traits are wearing on the nerves and detract from the story. So does the whole Brandon obsession with bacon. It is as if the author can't come up with anything interesting to do with Brandon. Cute at first but now it is like a chinese water torture to already know in advance it will keep coming up over and over and over again. Clove is as bad as Bay.
However Tilly and Thistle had me laughing as did the scenes that involved Mrs Little or the girls interaction with Esther!
This one I would recommend.

Great book to relax and enjoy the humor

I so enjoy all the characters in this book. After a long day being able to listen and relax to the humor and the antics that this family and friends get into makes my day. I highly recommend this book. I gave the book 5 stars and the narrator also five stars

The books are so good!

These get better and better! I love the Winchesters, especially Aunt Tillie. Peg will be a great pet. ;)

Oh please don't let it end here. I'm attached to these characters and can't wait to see what they do next!!!

this one tied up a lot of threads! great stuff!

this narrator head gotten a Lot of negative feedback, myself previously included, but she's growing on me and i think she's come a long way. yes, she Is different from the og. well duh. given a chance tho, she's not bad at all. good job ladies!!!