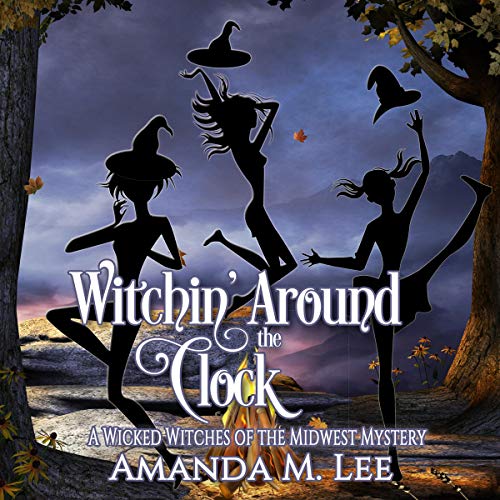 Witchin' Around the Clock

Witches are descending on Hemlock Cove and the town is gearing up for mayhem. Bay Winchester is ready to cover the event for her newspaper, and is excited to see faces she hasn’t interacted with in more than a decade.

Then the unthinkable happens.

The local blacksmith shop catches fire and Bay and her cousin Thistle risk death to try and rescue the owner. Unfortunately, they’re too late, and the man is unable to be resuscitated. Not only that, but it wasn’t the fire that killed him. No, he was murdered.

Bay can’t shake the feeling that something bad is about to happen. Harbingers of the feathered variety are filling the sky...and threatening attack. Dark magic is at work, and someone is plotting multiple deaths.

It’s up to Bay and her family to save the day, and they have to do it before cousin Clove gets married on the summer solstice. It’s a big day for the family, and a big moment for Bay. She’s the center of attention as the clock ticks down, the weight of the world on her shoulders.

The Winchesters won’t sit back and wait for a fight to come to them, they’ll go after the fight...and this is no exception. As death comes calling, they will answer.

Sit back and enjoy the ride. Love, marriage, death, and destruction are about to collide. You won’t want to miss a thing.

What listeners say about Witchin' Around the Clock

narrator ruined it for me

I love this series, however Hollis McCarthy maybe the worst narrator EVER! Please bring back Aris or Leslie Ann Fogle.

The Winchesters are the perfect blend of snark, humor, and heart. Aunt Tilly— my hero! The narrator keeps over a dozen main characters very distinct; she is A+.

I have read and or listened to every book in this series along with the shorts and fantasy books. They are well written and have a wonderful story line. Underneath all the snarky, laugh you bum off comments is a story of family and the love and commitment to that family. This time around there’s a wedding and even more witches. With plenty of snark and fun. If you looking for a book that doesn’t make you sad and you will only cry because you are laughing to hard. This is a Light hearted, funny sweet series and I hope it continues for a long time.
Note try Amanda’s other series as well equally as good.

I do not like the narration, I have tried, I don't like it. I am invested in the story and characters now and its convenient for work. I am almost looking forward to the end of the series because of the narration. I usually dread a good series ending.

Witchin’ Around the Clock is one of Ms Lee’s best efforts to date. I loved that Bay is finally beginning to embrace her powers. For once, I actually figured out who the murderer was before Bay did. Usually I am as shocked as she is when the light comes on. Aunt Tilly’s antics on her scooter provided welcome comic relief. The harbingers brought back memories of Hitchcock’s The Birds.

I’m still hoping for a crossover novel with the Grimlocks. Are you listening Amanda? I especially enjoyed the big confrontation near the end of the book, though I nearly choked on my iced tea. My front teeth are just fine, thank you. I gave this book 5 jars of pickled beets.

How could I possibly be disappointed.

A bit predictable only because I know the characters so we'll. Cannot wait for Clove"s baby and the weddings of Bay and Thistle. And their children - Bay should have a powerful little girl who learns everything Tillie has to offer and Thistle ends up with twin boys!

Another Winchester story that is funny, enlightening and draws you in. I feel like I am living with the characters and getting to watch them grow and change. So good!

Love my Winchester witches more with each passing tale! Thank you for continuing the series

Such a great series.

This whole series is wonderful. I think everyone should listen to this one. They are nice stories that everyone can relate to as well as relax to.

I had a great deal of difficulty with this particular book in the series. I'm not sure if it was the performance because I really felt the voices made the characters seem like a bunch of whiny teenagers. I had difficulty continuing to listen to this book and had to take breaks. this wasn't the strongest of the stories but it is cozy rather than a full-out mystery. I would have liked to have seen the characters act like adults and sound like adults. I was disappointed in this book in the series.