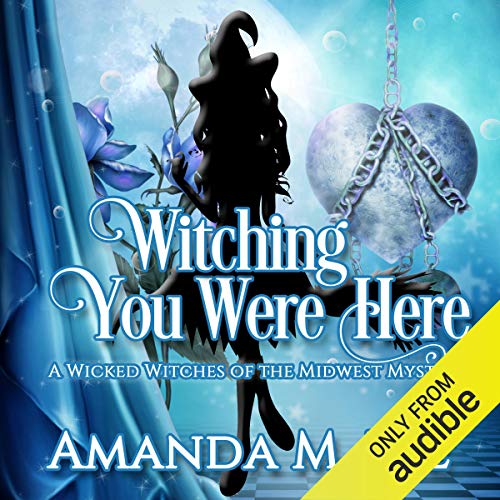 Witching You Were Here

Winter has hit Hemlock Cove and not in a fun way.

The cold weather is keeping most tourists out of town, which is just fine with the Winchester witches. They're using the lull as a way to recharge and take a break - even if Aunt Tillie is causing her usual havoc.

All that comes crashing down, though, when a large yacht is found abandoned in a nearby channel, and there's blood on the deck. For Bay, things go from bad to worse when local law enforcement is joined by a federal representative in the form of Landon Michaels - her former flirt partner and possible boyfriend.

Landon has come to town for more than just the case, though; he's here to make amends. And even if Bay is ready to accept his apology, that doesn't mean her family is. Landon may be here to win her back, but he's also a man on a mission - and that mission is truth. He wants to know the Winchester family secret - whether Bay is ready to share it or not.

Landon isn't the only visitor in Hemlock Cove, either. Thistle's father - Ted Proctor - is also in town. He says he's there to buy some property for a business consortium, but he's having secret meetings and hiding a bevy of truths from his daughter and her busybody cousins - something that sets the whole family on edge.

When you couple that with the hot new handyman, the hipster snowboarders, and Aunt Tillie's rage about her wine closet being confiscated for a new furnace, it's another fun-filled mystery for the Winchester witches and Hemlock Cove - as long as everyone can survive the snow and the killer that hides in it, that is.

Note: These books are full of sarcasm and are a little bit snarky - so listen only if you like to laugh and you aren't easily offended. This is the third book in the Wicked Witches of the Midwest mystery series.

What listeners say about Witching You Were Here

Witching you were here

This was an ok cozy mystery. I like the setting. There was a ok plot and a subplot. Family interactions were tedious. It was a quick audiobook and I think a better narrator might have been able to liven up the family dialogue.

if you love snarky witches you'll love these books

Funny, witty, and full of spunk. Love these cousins and there aunts. A definite read if you have a dysfunctional family and you like to laugh at others with the same challenges.

it was okay it's not as exciting as the first two

Love the series, not thrilled by reader

If you could sum up Witching You Were Here in three words, what would they be?

What was one of the most memorable moments of Witching You Were Here?

Would you listen to another book narrated by Aris?

Aris is a good reader but makes the 3 girls who are from Michigan sound like they are Valley Girls from Southern CA. "Like" they don't talk that way anywhere else but Southern CA so it was a bit of a problem for me to listen to them. I tend to read these books rather than listen to them because of that. Unfortunately I had already purchased several of the audible books when I bought the kindle books because they were discounted.

Where does Witching You Were Here rank among all the audiobooks you’ve listened to so far?

Great listening and enjoyed every minutes of the read.

What other book might you compare Witching You Were Here to and why?

A Demon Bound.....the story line had me addicted till I finished the series.

When Aunt Tillie guarded the girls room with a shotgun.

Yes.....and then went to the next book of the series.

These books always make me laugh out. They are always a fun read/ listen. Well done

Please learn how to pronounce "vehemently!"

I am really enjoying this series, but Zi'm 3 books in and no one has corrected the narrator's mispronunciation of the word "vehemently?" It may be petty, but it's annoying to be jarred out of the story every time I hear veh-HEH-ment-ly.

Light, fun enough. The narration dropped it down a bit. Much of the dialogue was snappy comebacks, but the narrator paused between each person, so the snap was lost.

Where does Witching You Were Here rank among all the audiobooks you’ve listened to so far?

What does Aris bring to the story that you wouldn’t experience if you just read the book?

The different voices that make the charactors come alive

Can't wait to do more in the series