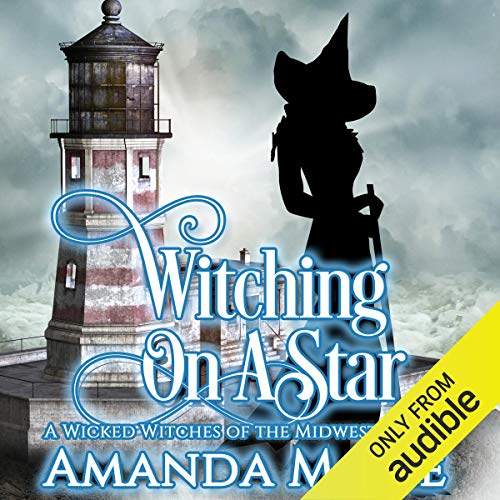 Witching on a Star

When you're a witch, being wicked comes naturally.

For the Winchester witches, though, being wicked is only half the fun.

After a long winter, spring has finally hit Hemlock Cove, and Bay Winchester thinks things are finally settling down in the town - and with her family. Unfortunately, just the opposite is true.

As a way to distract Aunt Tillie, the Winchester family has decided to give her a new project: her own greenhouse. As construction starts, though, Bay is approached by a young girl - one she quickly realizes is no longer among the living - and given a task. The little girl wants her mother - and she wants Bay to find her.

If that wasn't bad enough, Bay's boss has brought in a consultant who wants to up The Monitor's production to three times a week, Bay's father and uncles are in the midst of opening their own rival inn - which has the middle generation of Winchester witches in a tizzy (and Aunt Tillie on the warpath) - and FBI agent Landon Michaels is finally embracing the truth about witchcraft.

In short order, Bay finds out that there may be more than one ghost in need of help, Landon is still suspicious when it comes to the Winchesters, and Aunt Tillie finds she has an unlikely suitor in pursuit of her curmudgeonly affections, which doesn't stop her from cursing the youngest witches in the family when the mood hits.

It's just a normal week in Hemlock Cove - that is until the truth about two small ghosts blows sky high and brings a world of trouble to the Winchester witches' doorstep.

Note: These books are full of sarcasm and are a little bit snarky - so listen only if you like to laugh and you aren't easily offended. This is the fourth book in the Wicked Witches of the Midwest mystery series.

What listeners say about Witching on a Star

Enjoy series and anticipate the next book.

Pretty much like the previous ones. Bunch of missteps before the bad guys get blown away with a spell. Light and easy.

Funny and as always enjoyable.

A friend recommended this author and this series of of books. I have been enjoying them a great deal. I love a book that makes you laugh out loud.

Another great story with the Winchester women. Story is a little bit more serious, but without a doubt great! On to the next adventure with the growing clan!

Would you listen to Witching on a Star again? Why?

Only if someone else reads the story. Its a fun read.

What was one of the most memorable moments of Witching on a Star?

Aunt Tillie on the Warpath with the ex-husbands. Always trying to sabotage there new Inn.

It is just that Valley Girl sound to the 3 girls. It just drives me crazy. They are not from Southern California so why make them sound like they are. I am from CA and none of us talk that way unless you are from Simi Valley. It makes them sound like self absorbed idiots.

If you could take any character from Witching on a Star out to dinner, who would it be and why?

Aunt Tillie she is a hoot.

Change readers or make her stop making the girls sound like they are from Southern California.

I'm sad it's over

Another good one by Amanda Lee. Can't wait for the next one. I read them so fast.

This is definitely one of the more dramatic of the series (tears may be involved if you're extra soft hearted), but still with all the humor and adventure. Amanda M. Lee can bring a huge amount of personality to a lot of characters and none of them fall flat. I'm not sure if Clove was meant to be incredibly annoying this time (ever evolving characters), because she is usually the most timid of the three and gets whiny when things get exciting or mysterious. She's usually a good mix of quirky and dingy, so I'm hoping she's just going through a phase, but with a new smaller character thrown into the mix that has yet to be defined as good or bad, things could be heading in a lot of different directions. Definitely up to the typical Witches of the Midwest standards.

This is a fun easy read. Luv the characters. The family enter action is what makes the book so fun to read!