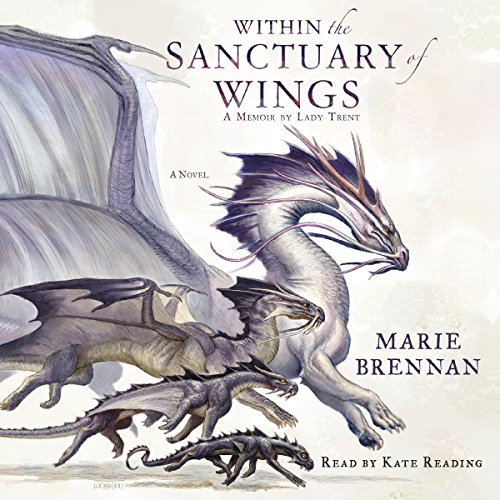 Within the Sanctuary of Wings

Written by: Marie Brennan
Narrated by: Kate Reading
Try for $0.00

Within the Sanctuary of Wings is the conclusion to Marie Brennan's thrilling Lady Trent Memoirs.

After nearly five decades (and, indeed, the same number of volumes), one might think they were well acquainted with Lady Isabella Trent - dragon naturalist, scandalous explorer, and perhaps as infamous for her company and feats of daring as she is famous for her discoveries and additions to the scientific field.

And yet - after her initial adventure in the mountains of Vystrana and her exploits in the depths of war-torn Eriga, to the high seas aboard the Basilisk and then to the inhospitable deserts of Akhia - Lady Trent has captivated hearts along with fierce minds. This concluding volume will finally reveal the truths behind her most notorious adventure - scaling the tallest peak in the world, buried behind the territory of Scirland's enemies - and what she discovered there, Within the Sanctuary of Wings.

What listeners say about Within the Sanctuary of Wings

absolutely fantastic conclusion to an amazing series, and I truly believed I was listening to lady Trent herself reading to me.

THE BEST ENDING TO A SERIES EVER

I ABSOLUTELY LOVED THIS BOOK!
Marie Brennan did not disappoint with this final book in the series. I didn't get even close to predicting her final discovery. Once I read the plot twist I had to stop reading and just absorb it. It was probably the happiest I have been all year reading this book! I am sad to see this story come to a close, but Brennan couldn't have written a better ending! This is definitely my best book of the year.

A great ending for a great series

A really great read that I enjoyed listening to from start to finish. Who would have thought that one of the best series I've ever read about the joys and hazards field work as a scientist would be so fantastical.

Ms. Reading does a fantastic job as the narrator bring the characters to live. She IS Lady Trent to my mind.

Highly recommend the series for any young people interested in biology or the social sciences. You be hard press to find a better real world role model.

An elegant and sumptuous ending

Loved this series and this rich ending was a testament to the strength of the series!

A great ending to the series

Reading the diaries of Lady Trent has been such a refreshing and enjoyable experience.
The 5th book is a great ending to the series and ties everything together.
It was well worth reading everything so far.

I love a well-narrated book, and Kate Redding takes this rather predictable story to it's limit. The author attempts to circumscribe modern hot-button issues of colonialism, privilege, and eurocentrism by making up new proper names for places (Africa is "Ariga", Arabic is "Achian", though I am guessing at the spelling). I love a bit of world building but in every aspect but name, these are obviously modelled in detail after our real-life civilizations and cultures, down to the Adam's rib origin story of the protagonist's faith. Despite all the modern discussion on WASP harm across the globe, this author makes no effort to approach the cultural issues that the protagonist encounters regularly with any sort of introspection. It's white girl lit for white girls who want to imagine the world has it out for them. I had hoped when I started that the author was using these cultural pseudonyms to do something inventive, to challenge some beliefs and imagine what it would be like to discover new fields of science and experience new cultures from an alternate perspective (which is to say, something other than clearly British colonialism). Instead it's written as though the only truly oppressed people are white ladies of a certain social status who don't get whatever recognition from older white men they think they deserve. It's tragic that the author did so little with such an opportunity, and this series won't stand the test of time against modern works like NK Jemisen's.

Part 2 was really really hard to get through. Other than that, it was a really fun ending.

A satisfyingly bombastic conclusion to a truly engaging series. Brilliant narration, as with all the other books.

An absolutely fantastic end to a wonderful journey

This entire series has been such a pleasure to listen to, none more so than this book in particular! The story, the characters and the world building were fantastic as always! And Kate Reading did such a phenomenal job with voicing all of the characters and making them distinct from each other that I hardly ever was confused as to who was talking (on the occasions where there isn't a "__ said" at the beginning or end of the sentence), which can sometimes happen with audiobooks. Both her voicing and the writing made everything so colorful and vivid! On one hand I'm sad the series is over, but on the other hand I think this book wrapped the series up so well that I don't feel like there needs to be more

As good as the whole series.

I enjoyed it fully and I am sad that this was the ending book. But all things must come to an end

Wonderful conclusion to a great series

The author saved her best for last! The series just got better and better! What a great book and great series!