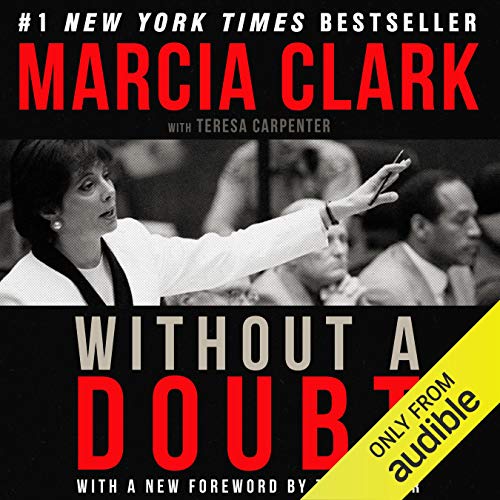 From the outside, the prosecution's case looked bulletproof, but Marcia Clark knew better. Mountains of physical evidence connected O. J. Simpson to the murders of Nicole Brown and Ronald Goldman, but that didn't mean it would be easy. For the woman charged with prosecuting the "Trial of the Century", the light of fame would glow white hot, as the media scrutinized her strategy, her family, even her hair. As the case spun out of control, Marcia Clark stood tall - a single mother fighting an army of overpaid attorneys and a judge who let the media coverage go to his head. Now she tells her story.

The bloody glove, the botched evidence collection, the LAPD's war with the black community of Los Angeles - Marcia Clark understands every moment of the O. J. Simpson trial like no one else. In this gripping account of her life, her career, and the trial that made her a legend, Clark shows what it truly means to fight for justice.

What listeners say about Without a Doubt

I would haved loved to be able to listen to the whole book. The abridged version leaves so many important things out.

Generally, I'm deterred and purposely refrain from an abridged novel as it neglects poignant details, however, Marcia hit the highlights and articulately delivers with unwavering passion.

The ending was pretty amazing, as she describes how her life moved forward with the writing of this book. Having faced a 30 yr silence for an issue she endured at 17 yrs old, I completely relate to her story, back when she was young, innocent & vulnerable.

I didn't know this was abridged until the end. I never purchase abridged books, but honestly -- I had no idea what I was missing because it was clear, concise & complete. now I am interested in listening to the full story..
Thanks Again Marcia Clark, you rock :)

It was absolutely riveting and I really appreciated hearing directly from Marcia as she reflected back on her feelings and experiences during that difficult time.

I enjoyed her candour and her no-holds-barred blunt options; she doesn’t pull any punches! (nothing nice to say about Judge Lance Ito… Yikes!!!)

I was so absorbed by the “behind the scenes” machinations, it made me want to read a version told by someone on the Dream Team to see how their brains work. Being in the “he did it camp” myself, I can completely sympathize with the prosecution’s case and can’t imagine their devastation upon losing… but what drove the defence? Money? I find it impossible to imagine that they really thought he was innocent.

What a complicated mess!

So great to finally hear in her words just how unjust that trial turned out to be! Much respect, Marcia!!!!!♡

After completing the recent Fox series on OJ I took renewed interest in the story. I always thought he was guilty & was shocked & saddened to watch the actual story unfold along with the racial issues that were evident. I was disgusted by the "dream team". Marcia Clark has a great deal to be proud of with her handling of a very difficult case. She has done quite well for herself, many others have not. Really enjoyed her reading of the story

Marcia Clark's version of the trial.

Over 20 years later and due to the recent TV show I'm finally listening to books I had not yet listened to about the OJ Simpson trial. I lived in Southern California back then and it was THE news for the months of took for the trial. It is nice getting some perspectives not possible at the time.
I feel this abridged version is perfectly adequate for this story, and I don't think if the unabridged version comes out of would be worth the purchase or the credit to hear it.
I am glad that Clark herself read the story and feel she's is a very good reader.
OJ did it, and he got away with murder because of many problems and not just the Prosecutors, if anything I think the biggest failure sits with former Judge Ito to be in control of his Court. I think the results and demeanor of the civil trial proves that.
Next book I'm listening to regarding this trial is the book by Vincent Bugliosi. Then I'll be OJ'd out!

Ms Clark’s voice and passion resonated in her book. I am truly thankful we have public employees that care as deeply with a profound work ethic. May her journey in life allow her good fortune.

After watching the Netflix documentary I went on to search for books on the O.J. trail. Highly enjoyable read. Two thumbs up for Marcia.

Really enjoyed the context in which the book was written. Felt a deep connection. Absolutely terrific!

I wish it wasn't abridged! Would have liked to hear the whole book. Great job Marcia.