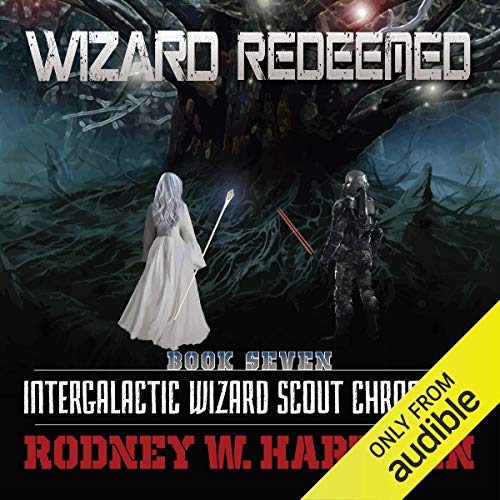 Written by: Rodney Hartman
Narrated by: Guy Williams
Try for $0.00

Wizard scouts have a mixture of technology and magic-like abilities. They have long been the defenders of the Intergalactic Empire, but they are fast becoming a dying breed. Now it seems only wizard scout Richard Shepard and his friends stand ready to defend the Empire and their allies in the magic dimension against certain destruction.

For a hundred thousand years the elves’ Tree of Light has protected the forces of good from an evil so dark it threatens to destroy every living creature in three galaxies. That time of protection may be coming to an end. The forces of darkness have in their possession a key that can open a gate to the demonic plane that will unleash armies of nightmare creatures on unsuspecting civilizations.

Longtime enemies must put away their grudges to find common ground as a wizard scout and an elf high priestess rally the forces of good to fight those of the dark. Can humans and elves work together to find a way to prevent the gate from opening? Can combining technology and magic win the day? Or will eternal darkness finally triumph over the light?

Haunted by his past, the beleaguered Richard must overcome his own hatreds before he can hope to rally his hard-won allies to victory. The way is fraught with peril, but if he succeeds, even a wizard scout may find redemption at the end of the day.

What listeners say about Wizard Redeemed

This is another great story !!!! Of the wizard scout series though sadly I feel that this series is coming to an end in the next few books I do look forward to the next one!!!!!

the farther in the store you get the worse...

the farther in the store you get the worse the characters get. I usually go to the end of a series, usually, not sure if I'm going to make. If only the characters, the different species of characters were a little more different or had some depth but they're so shallow it's... hard....to listen or read.

Things are getting real!!! Major ups and downs for me in this book. I loved every one of them and cant wait to see where we are heading!!

Loved the book. It was a great read can’t wait till book eight and nine