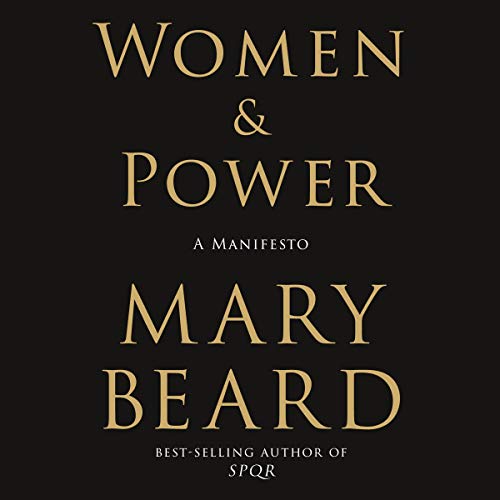 One of the Guardian's "100 Best Books of the 21st Century": "A modern feminist classic."

From the internationally acclaimed classicist and New York Times best-selling author comes this timely manifesto on women and power.

At long last, Mary Beard addresses in one brave book the misogynists and trolls who mercilessly attack and demean women the world over, including, very often, Mary herself. In Women & Power, she traces the origins of this misogyny to its ancient roots, examining the pitfalls of gender and the ways that history has mistreated strong women since time immemorial.

As far back as Homer’s Odyssey, Beard shows, women have been prohibited from leadership roles in civic life, public speech being defined as inherently male. From Medusa to Philomela (whose tongue was cut out), from Hillary Clinton to Elizabeth Warren (who was told to sit down), Beard draws illuminating parallels between our cultural assumptions about women’s relationship to power - and how powerful women provide a necessary example for all women who must resist being vacuumed into a male template.

With personal reflections on her own online experiences with sexism, Beard asks: If women aren’t perceived to be within the structure of power, isn’t it power itself we need to redefine? And how many more centuries should we be expected to wait?

"[A] sparkling and forceful manifesto... The book is a straight shot of adrenaline." (Parul Sehgal, New York Times)

"Beard's thrilling manifesto turns to ancient times to find the seeds of misogyny, beginning with Homer's Odyssey (the first instance of a woman told to shut up) and continuing through Elizabeth Warren's 2017 silencing in the Senate. An irresistible call for women to speak up, act and redefine their power." (People)

"Based on Beard’s lectures on women’s voices and how they have been silenced, Women & Power was an enormous publishing success in the '#MeToo' year 2017. An exploration of misogyny, the origins of 'gendered speech' in the classical era and the problems the male world has with strong women, this slim manifesto became an instant feminist classic." (The Guardian)

What listeners say about Women & Power

Wow! This was a very enlightening thing to listen too. I really enjoy anything Mary Beard does.

Enlightening and informative. Dr. Beard wrote this slim book by adapting two of her talks. It is about the nature power and misogyny through the ages, with some deft reference to ancient classical literature. I found the second half of the book fascinating, with frequent links to the past (Ancient Greeks and Romans) compared the current political and celebrity figures.

I have my own copy of the book and felt like I needed to highlight most of it. Powerful. It is not dry or "worthy", but pithy and often humourous (or at least, wry).

BTW: this audible version is an improvement on the published work as it has been updated, twice.

I thoroughly recommend this audible listen as ideal for any Human, especially those interested in History, and Gender Politics. It is not overly academic.

This book is based on Mary Beard's lecture, and leaves you wanting more! Thoroughly enjoyed it.

I learned some things

Not what I expected. Didn't like the narrator. Glsd it was short. READ IT AS PART OF A READING CHALLENGE

If we are ever going to be considered equal, everyone is going to have to understand the points brought up in this book.