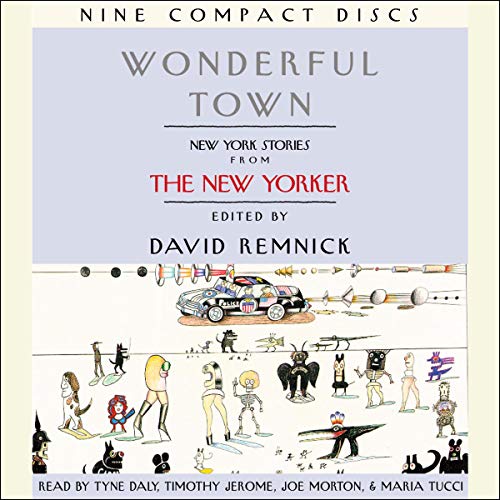 New York City is not only The New Yorker magazine's place of origin and its sensibility's lifeblood, it is the heart of American literary culture. Wonderful Town, an anthology of superb short fiction by many of the magazine's most accomplished contributors, celebrates the 75-year marriage between a preeminent publication and its preeminent context with this collection of 44 of its best stories from (so to speak) home.

East Side? Philip Roth's chronically tormented alter ego, Nathan Zuckerman, has just moved there, in "Smart Money". West Side? Isaac Bashevis Singer's narrator mingles with the customers in "The Cafeteria" (who debate politics and culture in four or five different languages) and becomes embroiled in an obsessional romance. And downtown, John Updike's Maples have begun their courtship of marital disaster, in "Snowing in Greenwich Village".

Wonderful Town touches on some of the city's famous places and stops at some of its more obscure corners, but the real guidebook in and between its lines is to the hearts and the minds of those who populate the metropolis built by its words. Like all good fiction, these stories take particular places, particular people, and particular events and turn them into dramas of universal enlightenment and emotional impact. Each life in it, and each life in Wonderful Town, is the life of us all.

Including these stories from the magazine's most iconic writers:

"The Five-Forty-Eight" by John Cheever

"Sailor off the Bremen" by Irwin Shaw

"The Whore of Mensa" by Woody Allen

"What It Was Like, Seeing Chris" by Deborah Eisenberg

"Drawing Room B" by John O’Hara

"A Sentimental Journey" by Peter Taylor

"The Balloon" by Donald Barthelme

"Another Marvelous Thing" by Laurie Colwin

"The Failure" by Jonathan Franzen

"The Catbird Seat" by James Thurber

"I See You, Bianca" by Maeve Brennan

"You’re Ugly, Too" by Lorrie Moore

"Signs and Symbols" by Vladimir Nabokov

"In Greenwich, There Are Many Graveled Walks" by Hortense Calisher

"The Evolution of Knowledge" by Niccolo Tucci

"The Way We Live Now" by Susan Sontag

"Do the Windows Open?" by Julie Hecht

"The Mentocrats" by Edward Newhouse

"The Treatment" by Daniel Menaker

"Arrangement in Black and White" by Dorothy Parker

"Children Are Bored on Sunday" by Jean Stafford

"Notes from a Bottle" by James Stevenson

"Man in the Middle of the Ocean" by Daniel Fuchs

"Me Spoulets of the Splendide" by Ludwig Bemelmans

"Over by the River" by William Maxwell

"The Second Tree from the Corner" by E. B. White

"A Father-to-Be" by Saul Bellow

"The Smoker" by David Schickler

"An anthology that makes] you remember why the magazine has long had a reputation for literary excellence." (Chicago Tribune)

A compassionate look at mental illness, from the perspective of a psychiatrist. It was interesting to learn what a psychiatrist does, as these professionals are often illusive when navigating the health care system. As a patient, friend, and family member of people with mental illness, it has been a bit of a mystery.

I would not want this job! and have a new-found respect for the professionals who work this field after reading this book.

It was an interesting read, for sure, and provides readers with concrete examples of a variety of mental illnesses, complete with historical synopses and information.

There are some fantastic stories in this selection, and I really love the way they span the decades from the early 1940s to the present day. New York itself is peripheral to some stories but central to others. The stories are often poignant and sometimes funny. The readers are excellent.

One thing that really irked me about the selection, though, is that between stories there is no pause. As soon as the last word of a story is spoken, they are introducing the next one. It happens before I can grab my player and hit pause so that I can savor what I've just heard.

Also, although the book is divided into two parts, there are no electronic stops in between. If you lose your place, it's very hard to scroll through all of that stuff to find where you left off. This is a general criticism of I have of many Audible books, but in this one it's particularly bad because there are so many obivous places that pauses could have been inserted.

Nevertheless, I highly recommend this selection.

Laugh. Cry. Love. You will be intrigued and uplifted by the collection of brilliant stories contained in this well curated and performed collection. A chocolate box.

Wonderful stories from the NewYorker

Would you listen to Wonderful Town again? Why?

the stories are brilliantly crafted and so well read

the variety of story types

not applicable to a group of short stories

a range of emotions from joy to deep quiet reflection

After almost every story, I had the same thought: why was this story even accepted for publication? The stories are, for the most part, about mildly interesting people in in mildly interesting situations. The story about the pregnant woman is a perfect example - woman is a few weeks from giving birth, woman has minor birthing complications in the hospital, baby is born fine, end of story. Nothing particularly gripping, nothing particularly insightful. So it goes, for the most part, with this entire collection.