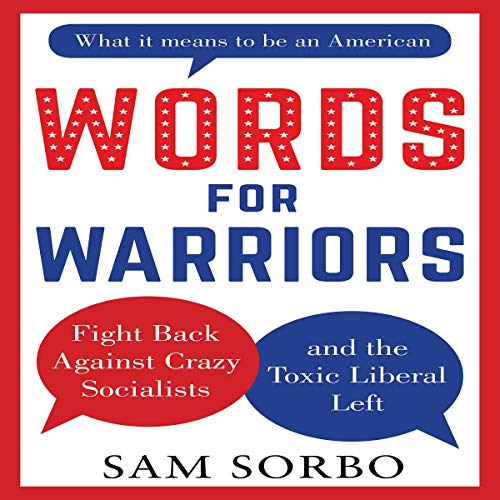 Words for Warriors: Fight Back Against Crazy Socialists and the Toxic Liberal Left

“They’ve hijacked words and then try to use them against us. But we’re gonna take ’em back." (Sam Sorbo)

In Words for Warriors, with her trademark wit and intelligence, Sam Sorbo shows exactly how radical left-wingers have manipulated language to fit their own socialistic and anti-freedom agenda. Sam Sorbo is on a mission to reclaim today’s hot button/culture war words for all freedom-loving Americans.

After hearing all the hatred spewing from ideologues, mainstream media, social justice warriors, and political hacks, Sam Sorbo was fed up: “I’m tired of their games, so I’m calling BS on them. It’s time to set the record straight, especially for the folks who are just trying to enjoy the lives the Lord gave them and want a few things explained in easy-to-understand prose.”

Arranged in an accessible “A-Z” glossary style, listeners can dip in to discover the real meanings behind the acronyms, words, and phrases that the toxic liberal left loves to force on the rest of us.

Words for Warriors is a treasure trove of linguistic gymnastics the Democrats and other toxic lefties employ to further their anti-American agenda. Arm yourself with Words for Warriors, and fight back against political correctness that squashes real debate, free speech, and prosperity.

“For too long the Left has tried to silence the Right through a war on words. Understanding their tactics and what we can do about it is crucial. Sam Sorbo lays it all out.” (Sean Spicer, host of Spicer & Co)

“Sam Sorbo knows words like I know MyPillows. Buy this book and get one for a friend.” (Mike Lindell, founder and CEO of My Pillow, Inc)

What listeners say about Words for Warriors: Fight Back Against Crazy Socialists and the Toxic Liberal Left

Other than my personal dislike for hashtags, Sam Sorbonne is a brilliant writer who included the hashtags most categories fell under. Maybe I’m old it’ll always be the pound sign to me. This is a fantastic book of truth of our lives in America. As a narrator she brings her sense of humor and passion to make the words live on after they’re spoken. If I had a choice to co-wrote a book with someone it would be with someone like Sam. She’s full of fire, fun, and life. She brings a sense of honor to each endeavor she accomplishes. MUST LISTEN TO THIS BOOK!

A Contemporary Dictionary on the Leftist Lexicon

Warning! Don't get this book if the truth is offensive to you. If so, you will be offended.

On the other hand, if you want to review or learn what the words the leftists use today really mean, then dive into this one. Whether you listen from A to Z like I just did or just use it for a reference it will benefit your understanding if you ever do run into that rare leftist who wants to have a conversation and try to defend their talking points.

Can you handle the truth?