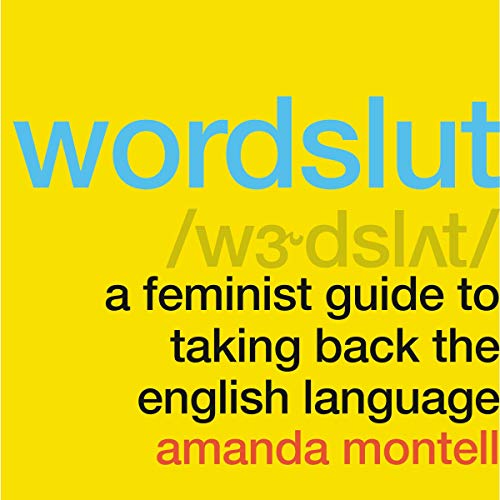 A brash, enlightening, and wildly entertaining feminist look at gendered language and the way it shapes us, written with humor and playfulness that challenges words and phrases and how we use them.

“I get so jazzed about the future of feminism knowing that Amanda Montell’s brilliance is rising up and about to explode worldwide.” (Jill Soloway)

The word bitch conjures many images for many people, but it is most often meant to describe an unpleasant woman. Even before its usage to mean a female canine, bitch didn’t refer to gender at all - it originated as a gender-neutral word meaning genitalia. A perfectly innocuous word devolving into a female insult is the case for tons more terms, including hussy - which simply meant housewife - or slut, which meant an untidy person and was also used to describe men. These words are just a few among history’s many English slurs hurled at women.

Amanda Montell, reporter and feminist linguist, deconstructs language - from insults and cursing, gossip, and catcalling to grammar and pronunciation patterns - to reveal the ways it has been used for centuries to keep women and other marginalized genders from power.

Ever wonder why so many people are annoyed when women talk with vocal fry or use the word like as a filler? Or why certain gender-neutral terms stick and others don’t? Or where stereotypes of how women and men speak come from in the first place?

Montell effortlessly moves between history, science, and popular culture to explore these questions and more - and how we can use the answers to effect real social change. Montell’s irresistible humor shines through, making linguistics not only approachable, but both downright hilarious and profound, demonstrated in chapters such as:

Montell effortlessly moves between history and popular culture to explore these questions and more. Wordslut gets to the heart of our language, marvels at its elasticity, and sheds much-needed light into the biases that shadow women in our culture and our consciousness.

What listeners say about Wordslut

Recommending this to everyone I know!

Sometimes when listening to books that are educational in nature, my metaphorical eyes glaze over. That was not the case with this read. Montell takes a deep dive on many language related phenomena we all experience but don't realize. Personally, I experienced many lightbulb moments while listening and clung to every word. I believe this is one of those reads you want to share with everyone in the hopes of making the world a kinder place.

Everyone needs to read this.

Well-written, fun, and very informative.
If you’re a woman or know a woman, you need to read this.

After reading Amanda Montell’s newest book Cultish, I knew I had to read this book immediately after, and I wasn’t disappointed. Amanda has this amazing writing style that I’m envious of, and she’s extremely knowledgeable on the subjects she writes about. In this book, she focuses on sociolinguistics, which is a topic I’ve been wanting to learn about for a long time. Although the focus of the book is how language is used to put down, control, and oppress women, it’s much more than that. As you read this book (especially if you’re new to sociolinguistics), you’ll learn a ton about the history of language, how it changes over time, and why people feel all high and mighty for correcting grammar.

I think the best part about this book is that it isn’t preachy. I could see how someone would think this book is trying to suppress speech, but that’s not it at all. Instead of trying to be the language police, Amanda comes off as educational while hitting you with facts, studies and research. You can still say whatever you want, but you’ll feel like a jerk because you have a better understanding of the effects of language. On top of that, I also appreciated learning about why I shouldn’t be so self-conscious about the way I speak. Although I’m a straight man, I’ve had people say I use feminine words and other criticisms of how I talk because they aren’t “masculine”. If nothing else, this book will help you drop the mic on people that try to criticize how you talk while you also learn how what you say may be causing harm without you even realizing it.

Found this book to be fun and delightful, mind-opening, and inspiring. I learned so much about language I use every day, and am leaving the experience feeling more aware, empowered, and hopeful for the future. Also, Amanda is a badass and a genius. Audiobook narrated by her was a delight.

An Interesting take on words - a perspective and facts I've never heard before and that I appreciated. I laughed out loud a handful of times. The author writes and reads in a very unpretentious way that makes the subject matter approachable and pleasant.

This book accomplished the tough job of taking a relatively boring and academic subject and making it interesting. This was more a 4.5/5 for me because I think it is definitely an essential read, but there was still some pets that got a little dry for me. This made me question and recognize a lot of things about how we speak and write, and honestly made me feel better about speech patterns that I’ve personally been criticized for in the past, along with many other women. I also thought this was very comprehensive and touched on all the influences of English speech, and was well researched and relatable.

Man, that ‘splaines a lot!

Dude here! I might not be as proud to say that as I had been before I read/heard this book lol. So much insight from Amanda, thank you!

I can not recommend this book highly enough. It is thoughtful, interesting, funny, and informative.

Amanda explains the intricacies of the English language's partiarchial pain points and the history of how we got to the words we speak today. Highly recommended!

I have loved this book, I felt like answered so many questions I had, and even more I didn’t realize I should be asking. I have recommended this book to everyone, both women and men, and all others that I know.

one of my all-time favorite books

from the bottom of my heart, Thank you in so many ways. btw ily 💕

this book took me a while to get through, had to pause and absorb the info. made me really think and check the way I talk to others.