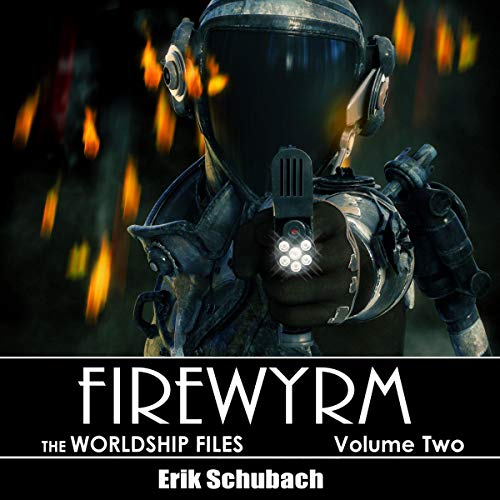 Written by: Erik Schubach
Narrated by: Claire Buchignani
Try for $0.00

When the Earth is threatened by a slowly expanding sun, mankind embarks upon a mission to send a mammoth Worldship to settle a new planet across the stars. The preternatural races step out of hiding to work with the humans to save what they can from their dying world. With the aid of the Fae, shape shifters, Vampires, and other creatures of supernatural lore, the Worldship, Leviathan, is complete one thousand years later.

Fire is the most terrifying concept on an interstellar spaceship like the Leviathan. Enforcer Knith Shade is tasked to investigate one that threatened the Alpha-Stack of the Worldship and uncover who was responsible for it when Queen Mab is the primary suspect.

But Queen Mab has more tricks up her sleeve, and the investigation brings Knith back into contact with her ex, much to the chagrin of Princess Aurora who may or may not be in a relationship with Knith.

Things are never as they seem as Enforcer Shade soon discovers, when she finds that the myths and legends of beings called Firewyrms may not be so mythological after all.

What a privilege and pleasure to return to the Worldship named Leviathan to reacquaint myself with Knith Shade, a female human law enforcement officer! In Erik Schubach's Worldship Files, an expanding sun puts all life on earth at risk--creating a need for the supernatural races to come out and declare their existence. Constructing a vast space vessel taking a thousand years to complete, the beings plot a course for another galaxy that will take ten thousand years to arrive. Able to sustain only twelve million beings, lotteries are held and the majority of humanity is lost. When Knith's adventures begin, the Leviathan is only halfway through her 10,000 years journey, and in the previous story, we learn alterations have been made to Knith that will permit her to see the journey through to completion.
For her current investigation, fire breaks out at the Alpha-Stack, which threatens the integrity of the entire ship! Knith Shade discovers the 'fire' is a sentient, gentle, child-like entity who is obviously accustomed to interacting with other beings but firewyrms were thought to be mythical. How in the twelve levels of heck did it get there? Once again Knith's smarts and pluck result in her solving the case in spite of the high position the perpetrators occupy on the worldship: And she manages to secure her safe existence on the worldship in doing so. In spite of the prejudice and hostility she confronts because of her humanity, she retains her found family of beings she'd gain during her first investigation including Princess Aurora for a girlfriend! Not too shabby for a woman artificially grown in the worldship's breeding laboratory!
The premise for this book still blows my mind as I haven't encountered anything quite like it in LGBTQ+ literature. The world-building is wonderful as the writer takes pains to use words with enough precision to clarify all aspects of the universe he's created. This extends to character development as we also witness the growth of several secondary characters as well as the protagonist across both books as well as within the current novel. As with the first book, this story is well-balanced and well-paced with a beautifully developed plot brilliantly resolved.

time to spank the queens

Again Erik Schubach never disappoints, and this book is no exception. I can't wait for the next in the series. These books keep getting better and better

for all 3 books review

cons: The story is overly simplified like you would find in a young adult's book. it's easy to follow and you're just generally waiting for the main character to figure it out 20 chapters later that is an exaggeration but it is still a long time for them to figure anything out.

the sexuality and implications make it inappropriate for young adults though so I don't really know what age this series is aim for.

The author has a really bad habit of repeating information as if the reader's memory is the size of a goldfish. could not tell you the amount of times I was rolling my eyes about them saying the exact same thing for the 10th time like every other chapter.

it's a very predictable plot. The structure is solid though even if it's simple.

The main character I'm not special is a little old by the third book In fact it was old by the second book.

the very very liberal views is personal taste but I can see it being a turn off to others.there's a few things that are very obvious but the one thing that's super clear and constantly in your face, there is the elite and then there's the poor.That's all I'm going to say about that since it's for the most part not relevant to the entire story.

majority of the cast is female which is fine but I found it odd that only two men had any semi-importance in the story realistically just the one because her partner is really pointless.


pros: The characters are likeable.

The world is interesting but not flushed out very well over the course of three books.

The character reminds me of an '80s cop in the I don't listen to orders I go in guns blazing because it's justice.

The story is fun but again super predictable. overall I would give it a 6 out of 10 story. narrations excellent. the narrator makes the book a lot better. recommend the audio book not the actual book.Don't know who the age group was for though. clearly not adults nor young adults maybe a 15-year-old but it's a little simple even for them.

Need to modify this review later use talk to text some errors are probably in the review.