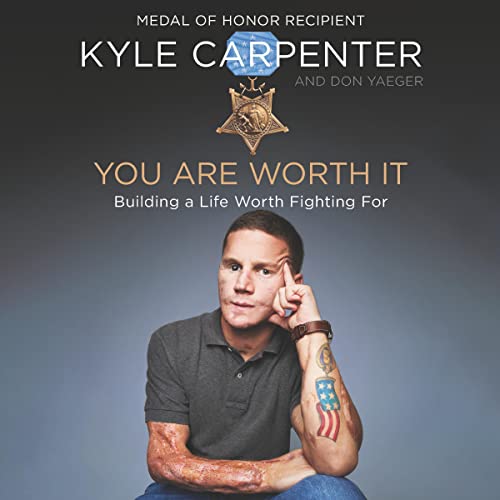 You Are Worth It

From the youngest living recipient of the Medal of Honor, an extraordinary inspirational memoir that will change the life of every listener.

“Kyle displayed a heroism in the blink of an eye that will inspire for generations." (President Barack Obama, at Kyle Carpenter's Medal of Honor ceremony)

"I want my story to help others see what’s extraordinary in themselves." (Kyle Carpenter)

On November 21, 2010, US Marine Lance Corporal Kyle Carpenter was posted on a rooftop in Helmand Province, Afghanistan, when an enemy grenade skittered across the roof. Kyle’s post that afternoon, with his friend and fellow Marine Nick Eufrazio, had been eerily quiet; now, with no time to escape, they had to make a split-second decision or they would both be dead. Without a second thought, Kyle jumped on the grenade, a brutal killing device. His vision went blank, his entire body numb, he tried to move but could not. His gear had melted. It felt as though someone was pouring warm water all over him; he dazedly realized that the liquid was his own blood. He had made an instantaneous decision, almost on instinct, one that would change his life forever.

Kyle’s heroic act saved Nick Eufrazio's life, but nearly cost Kyle his own. His heart flatlined three times. Wounded from head to toe, Kyle lost his right eye, as well as most of his face from the nose down. It would take dozens of surgeries and almost three years in and out of the hospital to reconstruct his body - and from there, he began the process of rebuilding his life. What he has accomplished in the last five years is truly extraordinary: He’s undergone extensive physical rehabilitation, graduated from college, ran three marathons, and embarked on a new career as a motivational speaker. And in 2014, he was awarded our nation’s highest military decoration, Medal of Honor, by President Barack Obama, making Carpenter the youngest living recipient of the award.

“With that singular act of courage, Kyle, you not only saved your brother in arms, you displayed a heroism in the blink of an eye that will inspire for generations”, stated the president.

You Are Worth It is a memoir about the War in Afghanistan and Kyle’s heroics, yes, but it also is a manual for living. Organized around the credos that have guided Kyle’s life (from “Don’t Hide Your Scars” to “Call Your Mom”), the book encourages us to become our best selves in the time we've been given on earth. Above all, it’s about finding purpose in life, despite the significant challenges that may come your way. As Kyle writes, addressing us all: “You are worth it. You are. You are worth protecting, you are worth fighting for, you are worth time in a hospital bed and deep scars on my body...."

Moving and unforgettable, You Are Worth It is an astonishing memoir from one of our most extraordinary young leaders.

What listeners say about You Are Worth It

this was such an amazing story and the best part is that Kyle is the narrator. such an inspiration to look at our struggles in a total different lens. i love hearing about Kyle's family, specially his parents that helped to shape kyle in such a strong, honest and wonderful man that he is now.

Kyle is an inspirational person and that shines through in the writing and reading of this book. When voicing his story, Kyle’s incredible positivity shines though. The gratitude and appreciation displayed for all the people involved along the way can be truly felt. I would and will be recommending this book often and emphatically.

Do yourself a favor and listen. One of the most inspiring stories I've ever heard.

Spoken and told by Kyle himself, the telling of his story is a complete emotional drain and beautifully so. It feels as if you are sitting beside him, in the truck, driving down a long quiet country road in his home state of South Carolina as he recounts his journey in unapologetic detail. Truthfully, listening to him describe the details are hard to hear at times. That said, as a listener, you are rewarded at other times as his journey has mountainous peaks of victory. Those hard-to-hear details, along with the victorious ones, are included and necessary to fully appreciate his experiences. It has soul-penetrating emotion. His story is inclusive for those with AND without military connections. I just finished the book and my emotions are reeling. I feel exhausted, but so thankful for the opportunity to follow his lead into those deep crevices of physical and emotional pain. I would encourage ANYONE to do just that but prepare yourself - listening to Kyle Carpenter tell his story in You Are Worth It, will have an affect on you. It is not for those looking for an easy read. This book will hurt you but it simultaneously rewards your heart and mind with a beautiful sense of thankfulness and fulfillment unlike anything I have ever read or listened to.

An Inspiration to All

Kyle does a masterful job taking the reader from his South Carolina home to Paris Island, Infantry Training and then to Afghanistan. He walks you through his up bringing and where he learned life is good and worth living. He brings you into the world of a Marine and explains the Honor, Courage and Commitment instilled in boot camp. The ever lasting brotherhood of the Marine Corps is displayed in all phases of Kyle's journey. The rebuilding of his memory of the events of Nov 21, 2010 must have been hard, but it did it with grace and courage. His journey through recovery and his love for his caregivers his evident. His love for family leaps from the pages as he narrates. His message is that of good honest effort and drive will get you everywhere. Wear your scares with honor is a masterful message. A great read for anyone who needs encouragement. On a side note, I had the privilege of meeting Kyle and his Mother at Marine Corps Museum in July 2011. They the kindest and friendliest people. Kyle was a true Marine greeting us with a smile and telling us his story. Semper Fi! Tony Tijerina, CPL USMC

words cannot describe the emotions behind the word

I loved this book. so many emotions. thank you for sharing your story. chicks dig scars.

You Are Worth It.

This book has changed my perspective on life and my mentality when not only talking to veterans, but first responders. Will be buying a hard copy as well.

A very thought provoking book! Funny, sad, honorable, resilient, loving, challenging, triumphant, motivating, and inspiring. Thank you Mom & Dad Carpenter for loaning your fine son to America. We owe you more than we could possibly repay.

I’ve listened to this book twice. The first time while deployed for a little Marine Corps motivation and the second time post deployment during my recovery from surgery. This book has helped me stay positive and gain motivation to succeed in my career and in life.

Kyle is truly an inspiration. He has an amazing story, and an a wonderful outlook on life. Thank you for your service.

I finished this book feeling grateful to have heard such an impactful story. I am motivated to purposefully live life of gratefulness.

As a veteran this was a hard and absolutely uplifting story thank you Kyle for the amazing and inspirational story of your life!

This was such a great book about a true American hero! Thank you for your service Kyle! And thank you for sharing your story!