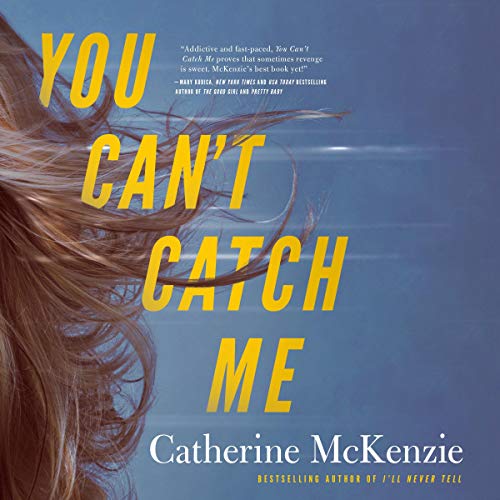 You Can't Catch Me

Written by: Catherine McKenzie
Narrated by: Julia Whelan
Try for $0.00

When the game is deception, nothing is as it seems in this novel of cunning psychological suspense by the #1 Amazon Charts bestselling author of I’ll Never Tell.

Do you want to play a game?

Twelve years ago Jessica Williams escaped a cult. Thanks to the private detective who rescued her, she reintegrated into society, endured an uncomfortable notoriety, and tried to put it all behind her. Then, at an airport bar, Jessica meets a woman with an identical name and birth date. It appears to be just an odd coincidence - until a week later, when Jessica finds her bank account drained and her personal information stolen.

Following a trail of the grifter’s victims, each with the same name, Jessica gathers players - one by one - for her own game. According to her plan, they’ll set a trap and wait for the impostor to strike again. But plans can go awry, and trust can fray, and as Jessica tries to escape the shadows of her childhood, the risks are greater than she imagined. Now, confronting the casualties of her past, Jessica can’t help but wonder...

Who will pay the price?

What listeners say about You Can't Catch Me

The novel is interesting and performed expertly. It's a good "get your mind off stuff" kinda book, but the ending is forced and not as profound as it desires to be, and there's a lot of holes in the narrative in hindsight, but I liked it enough and am glad I listened to it.

This was my first audio book and I loved it! Listened to it while out walking. Not sure how long I walked on the last day but couldn't stop until I got to the end of the book! I did not see that ending coming! The narrator was also excellent. I highly recommend this book!

This book seems like it was written to be read aloud, and Julia Whelan is the perfect voice to read it. I was worried that it would turn out to be more of a story about a cult than a story about a grift -- which it, thankfully in my opinion, is not. There are enough twists for it not to be predictable, although some of them are completely unbelievable, as is the norm for suspense fiction, but the book is written well enough, is expertly narrated, and is sufficiently clever for me to recommend it as a good pick for when you need an entertaining story.

I just finished, ´You Can’t Catch Me,´ and I’m sorry it’s over, but I whipped through it, as it was so good.
I don’t want to be a spoiler regarding any aspect of this richly layered story; and the publisher’s description hints at all you need to know to whet your appetite. There is a lot going on here, but it is superbly structured and easy to follow. All the characters are fully fleshed out, and the dialogue flows naturally. Julia Whelan’s narration makes the entire package a work of sheer perfection.

This story had a great premise, but all the pieces didn't quite fit together. Like a dot-to-dot puzzle with huge gaps that never connect, until the very end when all the leftover dots get clumped together in a rush. All those important plot points that were revealed on the last page should have been hinted at throughout the story. I wanted to have more of a hand in figuring out the mystery, instead of being left in the dark until the very end, and then the secrets were revealed to me in a very passive, afterthought, kind of way. I felt cheated out of the experience.

"Implausible" is the best way to describe this book.

Since I don't want to give away any spoilers, I will refrain from giving specific examples about the book's implausible storyline about a woman who escaped from a cult when she was a child. This woman just happened to meet a grifter at the airport (with her exact same name/birthday) who liquidated her bank account the following week. (Huh?) The fact that this woman tries to go after the grifter herself and identify more women with the same exact name/birthday that the grifter has conned ....gives new meaning to the word "implausible".

Julia Whelan, as usual, provided an outstanding narration. Even Julia, however, could not save this book.

I love Julia Whelan but the book was boring and drawn out. There is too much fluff and not enough story for me. There were also no characters to like.

Enjoyed every second... best book I’ve read so far this year. Hated to see it end.

Sometimes I’m not sure if a novel is really THAT good when Julie Whelan reads because she is so amazing. But this time, I’m certain. This story was so engaging and fun. Female grifters are the best. Superbly entertaining and a fast read!

What‘s in a name? Jessica is about to find out it’s her whole world and reputation. Desperate to reclaim what was stolen, she heads out on to get her life back. Interwoven with her past in a cult as a child, this book blew me away. Totally loved it. The actor was amazing and the voices were spot on. Can’t wait for more from this author.

Every time I choose an unsatisfactory book from my Audible library and cannot finish it, I immediately scroll to my Julia Whelan Audible Collection, choose one of hers of which I have many (so far, 20 and counting), and always enjoy a delightful listen. She’s never let me down! Instead of searching for audiobooks by book title, I often search by narrator. Catherine McKenzie pens a unique and suspenseful thriller that will certainly open one’s eyes when it comes to privacy in this day and age. A twisty, complex ending, so be sure to listen intently. Whelan brings all characters to vivid life like very few can. Highly recommended! No doubt! Whelan? Epic, I say! EPIC, EPIC! EPIC!

This is the kind of story that pulled me in from the get go and had me engrossed. I loved the sheer escapism of it and all the twists and turns. It had my attention every step of the way. Now, where else do I turn for more excellent entertainment?

Really good! Definitely worth a listen!!!! The only reason this wasn’t a 5 star was because at times I felt like I missed something. Also, the characters got twisted in my mind a few times, but never for long!!!!