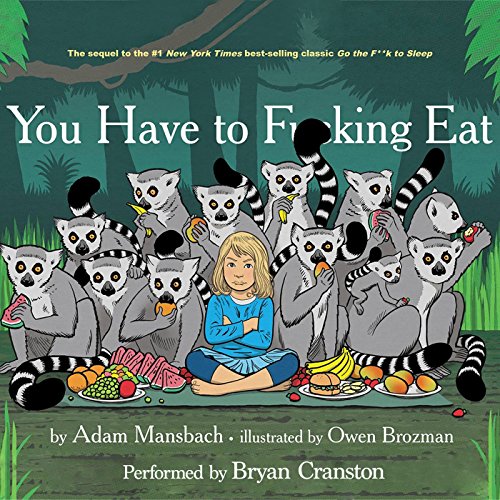 You Have to F--king Eat

Written by: Adam Mansbach
Narrated by: Bryan Cranston
Try for $0.00

Emmy Award-winning actor Bryan Cranston (Breaking Bad, Malcom in the Middle) follows in the exasperated footsteps of Samuel L. Jackson, giving voice to the long-suffering father whose indifferent child will just not eat in this hilarious follow-up to Adam Mansbach's international best seller, Go the F--k to Sleep.

Mansbach's long-awaited sequel is about that other great parental frustration: getting your little angel to eat something that even vaguely resembles a normal meal. Profane, loving, and deeply cathartic, You Have to F--king Eat breaks the code of child-rearing silence, giving moms and dads (new, old, grand-, and expectant) a much-needed chance to laugh about a universal problem.

Anchored by a hilarious performance from Cranston, You Have to F--king Eat is the perfect blend of talented voice actor and subversive fun that expertly captures Mansbach’s trademark humor. Due to its explicit language, you probably shouldn't play this one for your kids.

13 Brilliant Audiobook Gift Ideas for Dads For Their Next Listen

Get inspired by these insightful, informative, and hilarious books that are perfectly suited to dads. From personal stories to practical tips, these titles are a great asset for any father figure.

What listeners say about You Have to F--king Eat

love the book ! must read! funny as hell !
any parent or techer can relate.

Another role that Bryan Cranston plays to a T.

If you could sum up Free: You Have to F--king Eat in three words, what would they be?

My favorite character was the child, because they caused the main conflict in the book and advanced the plot nicely.

The last scene, it threw a real curveball.

Of course, but I had to clear a few things from my schedule to fit it in.

The credits are quite long.

Not with a bang, but a F--king Whimper

Adam Mansbach first book, "Go the F--K To Sleep' was brilliant because it was shocking, funny, original, and the meter worked. This one has Bryan Cranston, but that is just about it. IT wasn't nearly as good and the novelty is gone. It just doesn't work. Unless you are a die-hard eater, or love the F--k out of Adam Mansbach, I wouldn't buy this. But since it is free, sure down load the F--ker.

You Have to F*cking Listen!

A year before I became the 'Ardent Audible Listener' from Monrovia, Audible Studios posted a free version of Samuel L. Jackson's narration of Adam Mansbach's "Go the F*ck to Sleep" (2011) on YouTube. I watched and listened over and over, and wished "Go the F*ck" had been published 10 years earlier when my youngest stayed up as long as she could, every night, so she didn't miss anything. It was a 4 minute story I'll never forget, and a Facebook topic among my friends for almost 10 days. And, as we all know, 10 days on FB is like a century in real life.

When I prepared to write this review, I discovered that Thandie Newton narrates a 'veddy, veddy uppercrust British version'; and George Lopez does a hysterical rendition En Español. It's probably even funnier to someone who actually speaks Spanish and exceeds my skill of ordering food at a Mexican restaurant that doesn't serve its food in a paper bag; navigating rural California by talking to people because Waze isn't getting a signal; and cursing at loud neighbors playing Ranchero music at 1 in the morning. Actually, anyone who can do the latter is going to love Lopez' vets.

The print book "Go the F*ck to Sleep" is beautifully illustrated. Its pictures echo the soothing, muted tones of Mira Ginsburg's 1982 "The Sun's Asleep Behind the Hill", illustrated by Paul O. Zelinsky (1953 - present). Ricardo Cortés illustrations in "Go the F*ck" are almost an homage to Zelinsky. Samuel L. Jackson was the perfect, soothing, dryly witty American narrator for that book.

The title, "You've Got to F*cking Eat" (2014) really does speak for itself. Owen Bozeman illustrates "F*cking Eat", with livelier colors and scenes that call to a kid that's up and moving, not one just out of the tubby, wearing Pjs with feet, and laying in bed.

Both of Mansbach's "F*ck" books are equally risable, but the meter in "F*cking Eat" is off. Bryan Cranston really doesn't work well as a narrator for this story. He doesn't have the droll sense of humor Jackson has cultivated, and Jackson's introduction to "Go the F*ck" alone is a finely crafted piece of parent humor. Cranston's narration of "F*cking Eat" comes across as overwrought and his reading of the essential profanity conveys anger. I feel Mansbach was going for overwhelmed and exasperated. British actor Stephen Fry's "F*cking Eat" narration hits the right tone with me, and it's laugh out loud funny. Unfortunately, It's either not on Audible yet, or US users don't see UK versions.

I'm looking forward to more Mansbach "children's books for adults." I'd really like to see a "Get the F*ck Out of Bed" addressing a tween/teen, narrated by Cranston. Or if it's really dark, David Morrissey, who's best known to Americans as 'The Governor' on producer Frank Darrabont's "The Walking Dead". That's the guy to get my eldest the f*ck out of bed and on his way high school.

Would you consider the audio edition of Free: You Have to F--king Eat to be better than the print version?

I love the narration but I'd rather read along with pictures.

What was one of the most memorable moments of Free: You Have to F--king Eat?

Everything from the first swear word to the last.

Everything. His voice brings me to tears.

When the child finally ate a pancake.

Highly recommend this to anyone with children who won't eat.

If you could sum up Free: You Have to F--king Eat in three words, what would they be?

The Breaking Bad references (pancakes & scotch, neat)! I heard the original "Go the F--k to Sleep" about a year ago and loved it, but being a huge fan of Cranston, I like this one even better.

Who was the most memorable character of Free: You Have to F--king Eat and why?

This was awesome. Thank you for making my day, audible!

It's funny cause it's true!

Would you listen to Free: You Have to F--king Eat again? Why?

I'll listen to this several times. It's so frustratingly accurate that you have to laugh.

Bryan Cranston as the aggravated parent is spot on.

Have you listened to any of Bryan Cranston’s other performances before? How does this one compare?

I have not listened to any other audio performances by Bryan Cranston, but I absolutely will now.

If you could take any character from Free: You Have to F--king Eat out to dinner, who would it be and why?

Bryan Cranston, of course, to see what he'd say when I don't fucking eat!

I enjoyed this so much!

What made the experience of listening to Free: You Have to F--king Eat the most enjoyable?

I think having experienced the same emotions as the father in the story it just made things more hilarious.

Have you listened to any of Bryan Cranston’s other performances before? How does this one compare?

Bryan Cranston is a great talent. Not only can he do comedy well, but drama perfectly also. His range is phenomenal and he was a great choice for this title.

I had downloaded Go the F**K to Sleep when it was offered previously and enjoyed it. I think it's a great opportunity for Audible to get new members by offering free access to books.

A classic in the same vein as "Go the F--- to Sleep." Oh, how I love these audiobooks! As I listened to "You have to F---ing Eat," I couldn't help but picture Bryan Cranston as Heidelberg trying to get a small child to eat. That, in itself, made me chuckle... a great listen!

Would you consider the audio edition of Free: You Have to F--king Eat to be better than the print version?

Audible stories are the future. Printed version of books are slowly going the way of the dinosaurs in my sad humble opinion.

Just him in his entirety. HE IS THE ONE WHO SPEAKS TELLING YOU TO GO FRICKIN EAT!!!

It made me give me a slight chuckle.

Have him narrate the triquel!. (3rd entry in the series)

I just wished that Samuel L. Jackson would had told me to eat. He sure told me to sleep.