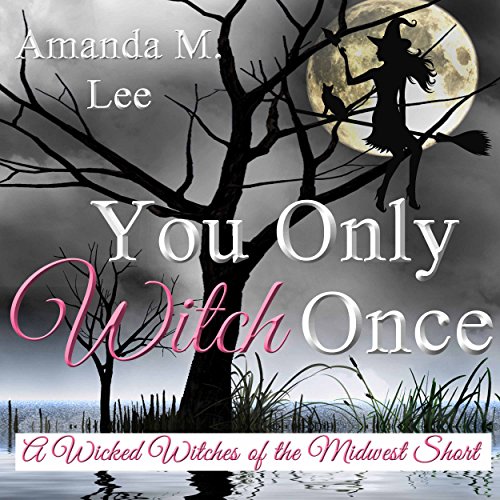 You Only Witch Once

It's the summer of 2002, and Winnie Winchester is a normal mother. She has the same highs, lows, and fears as any other mother of a 14-year-old girl. Of course, since she's a witch - and her daughter can talk to ghosts - those fears are amplified to an unnatural degree.

When camp counselor Donna Wilder goes missing, Winnie volunteers her services (and those of her sisters and persnickety aunt) so the Winchester witches can take over the extended weekend camp.

Local police detective Terry Davenport is running the boys' camp across the lake, and everyone is looking forward to a weekend of fun and frolicking.

It's all going as planned until Bay Winchester does what she always does and sees a ghost. Like a stack of dominoes, things start falling; and normal childhood hijinks turn into days of torture for Bay and her cousins, Clove and Thistle.

That's on top of a visit from second-cousin Rosemary who has the personality (and warmth) of a snake. The girl immediately aligns herself with Bay's sworn enemy, which means things are going to be bad before they get even worse.

Bay is on a mission to help the ghost cross over, and it's up to her mother and family to make sure she doesn't get hurt in the process.

Note: This is a short novella set in the Wicked Witches of the Midwest world. It's set back in time so you can't listen to it out of order. It will not take the place of regular installments in the series. It's just a short snapshot so you can get to know some of the other characters in Hemlock Cove.

What listeners say about You Only Witch Once

I have enjoyed the series, But the readers on the last 3 have been horrible. I am pretty forgiving, but this was brutal. I just keep reminding myself that they were short stories.

Would you be willing to try another one of D. Gaunt’s performances?

Would you listen to You Only Witch Once again? Why?

Yes. I love Amanda's characters and the voices bring them to life

I love the way the characters are able to give more depth to their storylines by going into the past. It provides answers to questions that were left from other books

I do not have a favorite scene...love all of it

These stories are an small escape for me.

This narrator had great differential character voices. Very entertaining. Cute back story fill in for the longer books too. Enjoyed it, thanks!

i love the hints of the future and destiny. Fate will always have Her way..;)
💗💗💗

loved going back and hearing mire about how bay and landon met. cute story, horrible narration.

Love the book but not the narrator

If you could sum up You Only Witch Once in three words, what would they be?


Who was your favorite character and why?

Tilley she is a hoot!

Who would you have cast as narrator instead of D. Gaunt?

Love all this authors books, but just did not care for the narrator of the book. Sadly she made the harder to listen to.

Another great story about the Winchester Witches which consists of 3 sisters, their 3 daughters, and 1 great aunt.
This story is set at a summer camp when the cousins are teenagers and their moms and aunt are the councilors.
Every story about this group of women has a little mystery, a lot of humor, sarcasm, biting dialogue, great characters, and each is a stand alone...you don';t have to read the others, but you'll want too.
Aunt Tilly is always a hoot, causing trouble, being sneakie and putting spells on people, usually the cousins, but not this time.
The 3 cousins are different from each other with different abilities, and still trying to figure things out, but devoted to each other, and we get a glimpse of how it was for them growing up...especially Bay who talks to ghosts.
This is a short story which is great for when you don't have the time to devote to a full length book, but it still has all the charm and humor of the longer stories and has a sweet little surprise at the ending.
I love reading and listening to stories about the Winchester Witches and this is a nice addition.
Enjoy!

Amanda M. Lee is a fantastic writer. Her snarky wit is fun and keeps your interest. I love the Witches of the Midwest series and the shorts are a wonderful addition. It is great to hear stories that involve supporting characters from the full length books. This time I had a hard time listening to this story. When I read it recently I enjoyed the story and had a great time with Bay, Clove, and Thistle as teens and getting to see the world from Winnie, Bay's mother, perspective was fun. The narration was disappointing. The narrater did a good job with the characters of Winnie, Detective Terry, Aunt Willa, and Landon. The remaining characters, which is a majority, were not good. They were high pitched and some sounded cartoony. This is just my opinion. You will have to listen for yourself. Even if you don't like the narration the story is really good and worth your time.