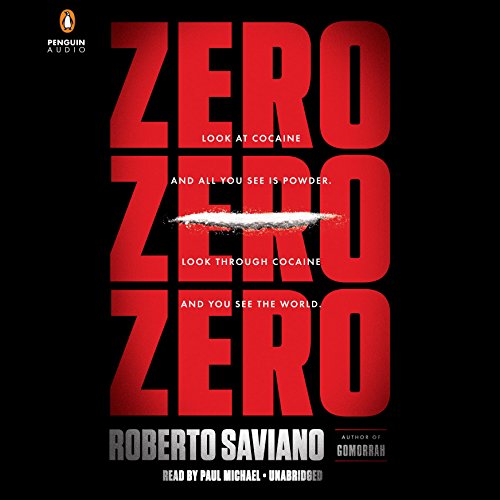 From the author of the number one international best seller Gomorrah comes an electrifying investigation of the international cocaine trade, as vicious as it is powerful, and its hidden role in the global economy.

In many countries, “000” flour is the finest on the market. It is hard to find, but it is soft, light, almost impalpable - like the purest, highest quality grade of cocaine. ZeroZeroZero is also the title of Roberto Saviano’s unforgettable, internationally best-selling exploration of the inner workings of the global cocaine trade - its rules and armies, and the true depth of its reach into the world economy and, by extension, its grasp on us all. Gomorrah, Saviano’s explosive account of the Neapolitan mob, the Camorra, was a worldwide publishing sensation. It struck such a nerve with the Camorra that Saviano has had to live under 24-hour police protection for more than eight years. During this time he has come to know law enforcement agencies and officials around the world. With their cooperation, Saviano has broadened his perspective to take in the entire global “corporate” entity that is the drug trade and the complex money-laundering operations that allow it to function, often with the complicity of the world’s biggest banks. The result is a truly harrowing and groundbreaking synthesis of intimate literary narrative and geopolitical analysis of one of the most powerful dark forces in our economy.

Saviano tracks the shift in the cocaine trade’s axis of power, from Colombia to Mexico, and relates how the Latin American cartels and gangs have forged alliances, first with the Italian crime syndicates, then with the Russians, Africans, and others. On the one hand, he charts a remarkable increase in sophistication as these criminal entities diversify into many other products and markets. On the other, he reveals the astonishing increase in the severity of violence as they have fought to protect and extend their power.

Saviano is a writer and journalist of rare courage and a thinker of impressive intellectual depth, able to see the connections between farflung phenomena and bind them into a single epic story. Most drug-war narratives feel safely removed from our own lives; Saviano's offers no such comfort. As heart racing as it is heady, ZeroZeroZero is a fusion of disparate genres into a brilliant new form that can rightly be called Savianoesque.

"In articulating [his] cri de coeur, [Saviano] has developed a literary style that switches from vivid descriptions of human depravity to a philosophical consideration of the meaning of violence in the modern world. Indeed, when he revisits his work on Naples - the city where he was brought up and from which he is now excluded - his reflections soar into the realm of the poetic. But for me, most important of all is the hope Saviano gives to countless victims of criminal violence by standing up to its perpetrators, especially those from his home country." (Booklist, starred)

"With keen observation and deep probing, Saviano is an anthropologist and philosopher as much as a journalist. This is an epic account of how the modern cocaine trafficking business came to be and how widespread, how impenetrable, and how intertwined with international commerce and politics - and our everyday lives - it is.” (Library Journal)

"A wide-ranging and chilling account of how cocaine dominates world markets.... This overview of the cocaine industry will be important for legal and criminal collections.” (Kirkus, starred)

ZeroZeroZero explores one of the most powerful dark forces in our economy - the world of cocaine and dirty money - and reveals the threat of increasing violence as cartels have fought to protect and extend their power. This internationally best-selling nonfiction uncovers how drug trafficking affects us all.

Roberto Saviano describes the complexities of money laundering, how global banks help make it possible, and the many ways drugs are smuggled. The best-selling writer tells vivid stories about the lives of well-known drug leaders and their henchmen. ZeroZeroZero is Saviano's second major work after Gomorrah, an international best seller that has sold over 10 million copies in 50 languages around the world. Saviano is paying the price for speaking out about the mafia—he has been under police protection since 2006 after receiving death threats.

Canadian-born narrator Paul Michael brings his expertise to ZeroZeroZero, speaking in a clear and serious tone. He has narrated more than 300 audiobook titles available for download on Audible, including The Laws of Human Nature and Origin. Michael has won an Audie Award for best narration and has been nominated for a Canadian Emmy. He has acted in feature films in Canada, the United States, and Great Britain.

ZeroZeroZero has been adapted into a TV series starring Andrea Riseborough, Dane DeHaan, and Gabriel Byrne. The eight-episode crime drama series follows a huge shipment of cocaine travelling from South America to Europe.

What listeners say about ZeroZeroZero

Loved it. Very informative and Indepth. I wouldn't have even known it was translated to English

This book been zero zero zero

Only people who finished it will understand what 000 mean. Great reporting as always

Like many, I watched the show and wanted more. However, I neglected to perform my due diligence, and that's on me. But, before you pull the trigger (#DadPuns), know that this book is simply a collection of anecdotes and retellings rather than a cogent and/or cohesive narrative.

At first I was wondering what did I get myself in to. But man with this Novel you realize that cocaine doesn't just hurt the person using it, it effects a lot more people than what you think. The brutal stories this writer speaks of are heart wrenching. No good news comes out of something involving the Drug Lords. Good for them for a bit but, in the end cocaine will find a way to even screw them and take them for all they've got too. If you ever wanted to know about cocaine and the people who grow it and sell it, Robert Saviano is your Willy Wonka he has your golden ticket in this Novel.

You know who uses drugs?

It has good parts. The first three minutes of listing people who might use cocaine set the tone for the book. A full 3 minutes of: jack uses coke, if not jack, jack's barber, in not the barber then writers, if not writers then trash collectors.
By the time I got to Ch 4 and the differences of Cocaine as a product versus a car.... I couldn't take it any more: cocaine makes a lot of money, a lot of people use it, a lot of people get hurt because of it. Not on par with his other books.

This book gives a detailed explanation about the history and current cocaine epidemic. Some very gruesome stories about the inner workings of the cartels. I highly recommend this book.

how much research must he have done

must read..he really breaks it down from bump to bricks to billions. I bought it thinking it was fictional basis for the Amazon show and was pleasantly surpised.

An absolute must read. Very in-depth look at the history of the cartels around the world and how they are connected.

great book and performance. best book on the subject I have heard to date. highly recommend.

If you use cocaine, please read it!

Excellent! highly recommended to cocaine users around the world and people that are not reluctant to understand what's going on.

Thanks for bringing up this discussion!

Let's help people that are suffering the horrors of this blood-stained money by creating consciousness and awareness of what is behind it.

If you could sum up ZeroZeroZero in three words, what would they be?

All the moments, i have not listened to this subject before

A must read for all wondering minds!

An enjoyable quick dip into the narco world.

Interesting book, far from the powerful Gomorrah's debut but still enjoyable. if you are interested in more in-depth information about narcos there a plenty of books out there, ZZZ barely scratches the surface.
An annoying detail: the audiobook reading is tampered with misspellings and sometimes major mistakes, maybe a better content review would have been appreciated.