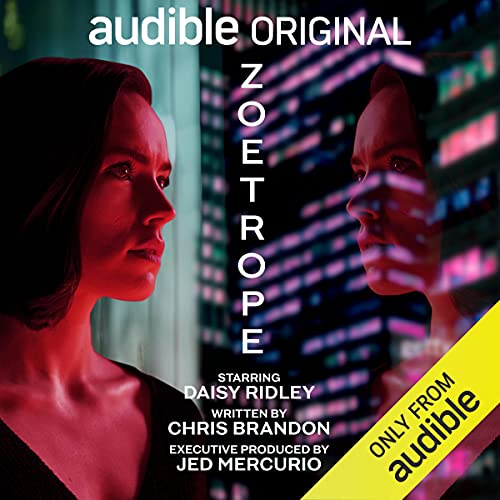 'I saw what you did'

New to Singapore and escaping a bad break up back in the UK, Tamsin’s attempts to settle in to her new surroundings are quickly disrupted when her building's speaker system crackles into life and an anonymous voice fills her glossy apartment.

Things had been going well until her welcome drinks, a night that ended with her boss incapacitated in her bathroom. Although Tamsin will swear it was an accident, from the adjacent high-rise things looked altogether rather different.

As the intercom messages become ever more demanding and Tamsin’s office co-conspirator Alex becomes increasingly frantic, an eagle eyed detective joins the case. Can Tamsin stay one step ahead of them all? It wouldn’t be the first time she’s been underestimated....

Written by Chris Brandon and executive produced by Jed Mecurio, Zoetrope stars Daisy Ridley as Tamsin and Jason Tobin as Alex alongside a full cast.

What listeners say about Zoetrope

If you are a fan of listening to people walk, breathe and cry with absolutely no plot or story… this might be for you… I already waste my time with some crappy podcasts… but this is in another realm completely.,, why split them in episodes if nothing happens? nothing!!!!

Had so much potential

The story and performance is amazing until the end. I had to listen to it twice and still didn't get it.

audible should be ashamed!! racist, vile garbage. complete anti asian nonsense that we dont need in a pandemic!! dasiy ridley has outdone herself with her racism this time!!

Nothing racist about it ! Very entertaining and kept me engaged from top to end.

Loved it from beginning to end. I think you all will enjoy. It took me by surprise and not what I was expecting.

The story starts strong and finishes stronger. The character arcs and uncomfortable subject matter make the skin crawl, but an excellent commentary on human interaction. People calling this racist is a bit over the top.

They don’t give much away in this story of a young British expat to Singapore. There is much the listener must decode and interpret on their own. Daisy Ridley’s vocal performance feels genuine and complicated. There is definitely more story to tell here and I hope they continue. As an expat myself, I found aspects of this setting relatable.