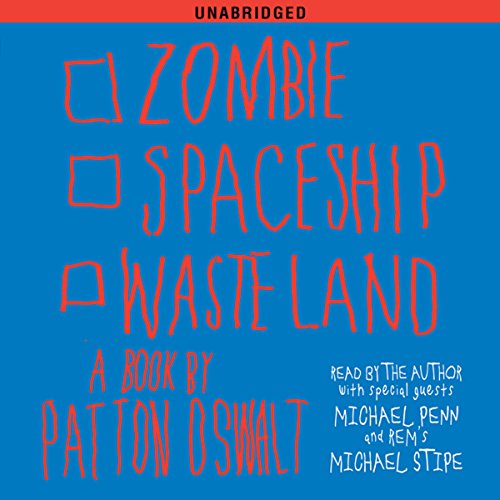 Prepare yourself for a journey through the world of Patton Oswalt, one of the most creative, insightful, and hysterical voices on the entertain­ment scene today. Widely known for his roles in the films Big Fan and Ratatouille, as well as the television hit The King of Queens, Patton Oswalt—a staple of Comedy Central—has been amusing audiences for decades. Now, with Zombie Spaceship Wasteland, he offers a fascinating look into his most unusual, and lovable, mindscape.

Oswalt combines memoir with uproarious humor, from snow forts to Dungeons & Dragons to gifts from Grandma that had to be explained. He remem­bers his teen summers spent working in a movie Cineplex and his early years doing stand-up. Readers are also treated to several graphic elements, includ­ing a vampire tale for the rest of us and some greeting cards with a special touch. Then there’s the book’s centerpiece, which posits that before all young creative minds have anything to write about, they will home in on one of three story lines: zom­bies, spaceships, or wastelands.

Oswalt chose wastelands, and ever since he has been mining our society’s wasteland for perversion and excess, pop culture and fatty foods, indie rock and single-malt scotch. Zombie Spaceship Wasteland is an inventive account of the evolution of Patton Oswalt’s wildly insightful worldview, sure to indulge his legion of fans and lure many new admirers to his very entertaining “wasteland.”

"Patton Oswalt is a brilliant rarity; a relentlessly creative and original comic who is also a superb writer. If you don’t buy this book you are a fool and I will, I swear, fight you.” (Conan O’Brien)
Fans of Patton Oswalt’s standup comedy have always known he was a born writer at heart, and now here’s the proof. This is a surprisingly affecting, sincere and daresay vulnerable collection of essays, all keenly observed, always very funny.” (Dave Eggers)
“Perfect—I can describe Patton’s book the same way I describe his stand up—brilliant and prolific, I am slackjawed, amazed, and left feeling both inspired and fraudulent.” (Sarah Silverman)
“Patton Oswalt is among the funniest on-stage talking humans I am aware of, so it annoys me deeply that he is also an incredibly talented writer. It annoys me, but it does not surprise me. Every sentence in this book is funny (except for the sad ones), but it also brims with Oswalt-ian smarts and surprising poignancy.” (John Hodgman)

I love Patton Oswalt... but

This wasn't really a book as much as it was a weird stream of consciousness. If I didn't know for sure there was an actual book I would have thought he just got high and told stories for the microphone. Didn't finish the book and returned it to Audible.

It's deep. Deal with it.

OK, yeah, this isn't a laff-a-minute book. If you're familiar with Patton Oswalt's writing about pop culture and geek culture, you know there's more to him than screeching (hilariously!) about KFC.

This isn't Oswalt as stand-up comic; this is Oswalt as a capital-W Writer and a graceful, capable, observant storyteller. The guy's got heart, wit, skill, a real sense for the emotional core of a story, the courage to be unflinchingly candid and vulnerable, wry self-awareness, and miles of pop culture knowledge. The comic stories are hilarious, but the memoir-style stories of childhood and working in comedy are what really stuck with me. He's a great reader, too; his performance of the text is natural and charming.

I got the audiobook thinking I'd like it, but I guessed wrong -- I LOVED it. I've listened to it four or five times by now, and sure, some of the freshness has worn off from the repeated listening, but I can't stop admiring the craftsmanship of his writing.

And personally, I don't mind the REM quotes, because Oswalt is so obviously gleeful to have one of his heroes on his audiobook. Imagine your best friend squealing with excitement about a dream come true -- it's totally charming.

An interesting peek into the mind of Oswalt

If you could sum up Zombie Spaceship Wasteland in three words, what would they be?

What other book might you compare Zombie Spaceship Wasteland to and why?

None. This is strictly Patton Oswalt.

I like when he discussess his memories of working in a movie theater,

There were several moment when I laughed out loud.

Patton Oswalt is incredibly funny and very intelligent. If you like his comedy you will like this book. If you don't like him don't buy this book. If you are a fan realize that while he is reading the book this is not standup. This is an often funny, real look at the life and thoughts of the mind of the author.

i like patton, he's a funny dude.but this book is not funny and jumps all over the place. maybe i just was in the wrong mood, but i just didnt get much enjoyment out of it

This is essential for fans of Patton, as well as insight in growing up, finding strength in weird places over the struggles we have as humans. It even has chapters that work as small sketches. This could really only work as an audiobook, Patton's narration as well as guests voices and the inflection for the sketches add so much more than simply reading it.

I like Patton Oswalt a lot but overall I thought that this book was just okay and only somewhat funny. Or better yet, maybe it would be more accurate to say, this book was good but not as funny as I originally expected. Oswalt does do a very good job on narrating too!

Patton's first outing as an author is a lot of fun. He is able to mix the flavor of his comedy with a series of essays on everything from Geek developmental psychology to Dungeons and Dragons. Along the way he even sneaks in some inspiration. Being a stand-up, Patton shines in the audiobook form. He doesn't just read his story, he speaks to you. It's WELL worth the price and I couldn't recommend it more.

I love Patton Oswalt generally, but this was terrible. It seemed to be mostly stream of consciousness writing with LOTS of obscure references to things in the 80's that I was too young to remember. If you're nostalgic for that time, however, some of this may appeal to you.

I really love Patton Oswalt's comedy. He is amazing. This "book" is not amazing. I have a hard time calling it a book. There are a couple of funny stories and a lot of other stuff that I don't know what to call.

Not great material for audio

Oswalt is actually a pretty good narrator but the material was not all that funny and the REM quotes totally disrupted the flow of the reading.

this is perhaps the worst audiobook I have listene

did this guy not have an editor or a publisher? This was a whole bunch of disconnected random thoughts of Consciousness essays. None of them were very good. I felt like I was an English teacher having to read all of the bad homework turned in. I have listened to hundreds of audiobooks and do not remember one I disliked more. As a matter of fact. It is prompted me to do my very first review here in hopes of saving somebody else the money that I wasted.