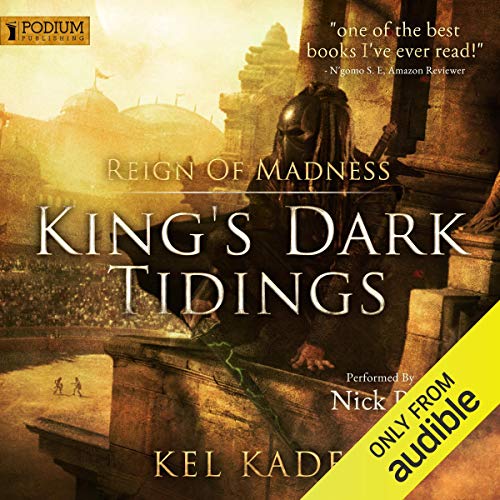 Equipped with skills far beyond those of the outworlders, Rezkin has been suddenly thrust into a foreign world. The young warrior clings to his only known purpose as he continues his search for any information about his identity and the reason for his existence.

While the hardened warrior scorns both dueling and tournaments, he believes some of the answers he seeks may be found at the King's Tournament, the greatest dueling championship in all of the kingdoms. As he searches for the elusive Striker Farson, who may be the only person alive who holds the clues, the young warrior and his friends embark on a journey fraught with danger, mystery, and intrigue.

Amid fears of the kingdom's economic collapse, rumors of an eminent military draft, and the machinations of a mad, tyrannical king, a new revelation threatens to upend all the warrior's plans.

This book is intended for adult listeners. It contains graphic violence, creative language, and sexual innuendo. This book does not contain explicit sexual content.

Amazing story and Amazing performance by the narrator. This performance rivals the graphic audio. I cant wait to hear the next book!

I enjoyed the story and the charactures and the naration was wonderful. have just bought next book in series .

What A Great Book! Loved it!

This was my favorite of the series so far. The build-up was just great and the pay off worth it. I am enjoying this series so much and it has been a long while since I have found one that gets better and better from book to book. On to the next one I can sleep after all the books are done!

love the characters and love the story. amazing adventure that makes me want to binge read all the books. even the political parts are fun

I loved everything about this book

I finished the entire book in two days. I couldnt stop listening. I really liked that there are so many characters but the story is almost exclusively from the main characters perspective. When it does go to another characters perspective, its never for long and it doesnt kill the momentum of the story. The book builds on everything from the first book wonderfully and the main character is still a badass. The new characters added in since the last book are all well voiced and have great personalities/ depth. I did not find a single part of the story draggy or boring. If i could give this book 6 stars I would.

if you are debating starting this series ...

do yourself a huge favour and use the slow start to get to know the characters and the narration. The series (this far) is seamless from one book to the next.It is a excellent story and I look forward to the books to follow.

a great follow-up to the first, couldn't stop listening. narrator also great, voices are believable and draw you in, never confused as to which character is talking. onto the next book immediately

I've loved the world building from the start, I have no complains in the world or its inhabitants, the only flows I have is the main lead you follow throughout is too perfect and you can't really relate in many ways. Overall the world is put together and its people flow throughout

I really enjoyed the voice actor, the story was fun but predictable and the hero unbeatable and getting even more powerful time and time again. But that’s what I want in a story

If you could sum up Reign of Madness in three words, what would they be?

I stated in my review of the first book in this series that the main was my favorite because the other characters didn't have much to them. I am very happy to see that the author has had his cast of character grow! I thoroughly enjoyed the maturing of these characters, all of them.

What does Nick Podehl bring to the story that you wouldn’t experience if you just read the book?

The narration of this book was done very professionally. Nick Podehl brings much to this medium. Each medium has its pluses and minuses and I don't like to say one is better than another.

Yup and did! I don't regret that in the slightest.

It is painful to leave the immersion of this story and I will be checking a lot for the next in the series! BRAVA Kel Kade! Keep going!

Must read for epic fantasy fans

With a healthy mix of character development, amazing battles, humor, and some mystery, it is definitely a must read. While it is a little "i know what will happen next," it still draws you into the story. I liken it to the Kingkiller Chronicles, but with less mystery and cliffhangers, and, so far vs the KKC, more battles and a faster paced story.

While I do prefer the mysteries of KKC, Kings Dark Tidings is more than worth a read. (plus, books are actually released so you don't have to wait SIX PLUS YEARS between installments... I'm not bitter.)

As always, Nick Podehl is a five star narrator, and his voicing of characters makes the story that much more interesting.

Dexter in the dark ages... with magic.

The character growth in this story never ceases to impress me. Rezkins' childlike, and psychologically stunted, mindset keeps the horrid situations strangely lighthearted while the actions of his personas show sociopathic logic. it's devilishly entertaining.

it's one of those books that you hate when it's over!! I enjoyed it better than the 1st.

If you could sum up Reign of Madness in three words, what would they be?

The entire book is excellent. There was always something exciting happening and you didn't have to wait long for things to get interesting. Just when you thought things couldn't get more exciting it does. The tournament was very well written and was very satisfying. Thankfully the ending didn't leave you a huge cliff hanger but still leaves you excited for the next book.

Which character – as performed by Nick Podehl – was your favorite?

Nearly did so. Yes

Can't wait for book three. I will probably read book one and two a few more times which says a lot from me as I hardly ever re-read books.

Please don't make me wait for the 3rd book

this was amazing!!!! i greatly enjoyed every part of this book. a bigger than life character i found fascinating!

Does it make sense if I say that this is a better book, but a less entertaining book?

I don't really get the point of reviewing books in a series past the first one. That is unless the series becomes terrible. So here is all you need to know: If you like the first book, you'll like this one. If you didn't like the first book, this one doesn't improve enough to make it worth it. If you are on the fence, read on.

The biggest difference is that the supporting characters of the first book, such as Frisha and Tam are basically minor characters this time around. This is probably a good thing because Frisha kind of becomes a jealous cardboard cutout. However the new supporting characters are quite enjoyable. There is a bit more depth to Rezkin and the story this time around. In fact, the overarching plot seems to have had rockets strapped to it! It moves along non-stop (in a 98% logical way).

Was I entertained? Yes. Is this still a great, light-hearted book to enjoy after a long day? Oh yes. Do I still recommend it? Definitely. The third book will be a day one purchase for me.

not a bad story overall, but some of the characters do fail the common sense test, the over explanation grinds on a bit (it is more boring academic baby steps then adding insight and wonder/potential in exposition), and Op main character is OP. It is very lacking because of that 0 tension the MC has when faced with anything.

Not bad overall, but there are just too many parts where I just cringe or roll my eyes and just get annoyed. Had potential.

I read a review for the first book claiming the nature of the main character did not allow for suspense. I disagree.

better than the first book. just after two book where rezkin searched for farson, he finally finds himself, they talk for about only 5 minutes?!? what's up with that!