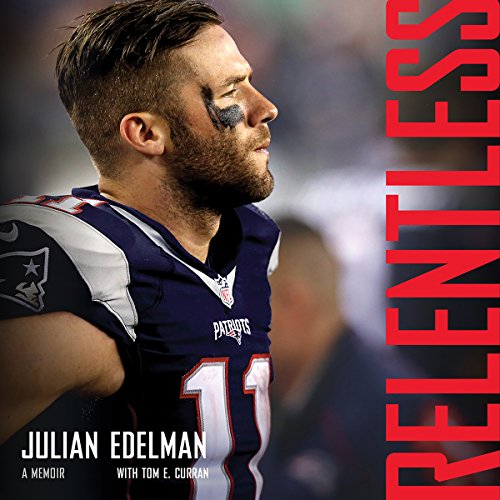 Bill Belichick: "Julian is the epitome of competitiveness, toughness, and the great things that are possible when someone is determined to achieve their goals."

Tom Brady: "It's a privilege for me to play with someone as special as Julian."

The Super Bowl champion wide receiver for the New England Patriots shares his inspiring story of an underdog kid who was always doubted to becoming one of the most reliable and inspiring players in the NFL.

When the Patriots were down 28-3 in Super Bowl LI, there was at least one player who refused to believe they would lose: Julian Edelman. And he said so. It wasn't only because of his belief in his teammates, led by the master of the comeback, his friend and quarterback Tom Brady - or the coaching staff run by the legendary Bill Belichick. It was also because he had been counted out in most of his life and career, and he had proved them all wrong.

Whether it was in Pop Warner football, where his Redwood City, California, team won a national championship; in high school, where he went from a four-foot-ten, 95-pound freshman running back to quarterback for an undefeated Woodside High team; or college, where he rewrote records at Kent State as a dual-threat quarterback, Edelman far exceeded everyone's expectations. Everyone's expectations, that is, except his own and those of his father, who took extreme and unorthodox measures to drive Edelman to quiet the doubters with ferocious competitiveness.

When he was drafted by the Patriots in the seventh round, the five-foot-ten college quarterback was asked to field punts and play wide receiver, though he'd never done either. But gradually, under the tutelage of a demanding coaching staff and countless hours of off-season training with Tom Brady, he became one of the NFL's most dynamic punt returners and top receivers who can deliver in the biggest games.

Relentless is the story of Edelman's rise, and the continuing dominance of the Patriot dynasty, filled with memories of growing up with a father who was as demanding as any NFL coach, his near-constant fight to keep his intensity and competitiveness in check in high school and college, and his celebrated nine seasons with the Patriots. Julian shares insights into his relationships and rivalries and his friendships with teammates such as Tom Brady, Wes Welker, Matt Slater, and Randy Moss. Finally, he reveals the story behind "the catch" and life on the inside of a team for the ages.

Inspiring, honest, and unapologetic, Relentless proves that the heart of a champion can never be measured.

"What Julian has done from the time he entered the league is nothing short of remarkable. He is the epitome of competitiveness, toughness, and the great things that are possible when someone is determined to achieve their goals." (Bill Belichick)
"Going from being a seventh-round pick to being a great player is a credit to Julian and really one of the most amazing transformations I've seen in this league. To go from a college quarterback, to a pro receiver, then to a great pro receiver? I don't know how many guys that have done that as well as Julian has....It's a privilege for me to play with someone as special as him. I always think I get much more out of my teammates than they get out of me in terms of the relationship and what it means for me to see them grow and succeed. I'm just so proud of him and everything he has accomplished and will continue to accomplish because I know that he's not done. He's got a lot of work he still wants to do." (Tom Brady)
"Julian has told me one of the reasons he's had success is the way his parents have always been there for him. Being firm and having expectations, but doing it with love and making him understand the hard work that goes along with becoming successful. If you're privileged to have a parent or a mentor guiding you to have great love and respect, I think it gets you through the hard times and helps motivate you to greater things. Julian is a testament to that." (Robert Kraft)

loved the book. Edleman did a great job of storytelling and creativity. if you're a Patriots fan it's a must read/listen

Fun to Listen to

If you like Edelman, the Patriots, Brady or Belicheck, you'll love it. Great story! Motivating. Narrator is a little over the top and cheesy, but it fits perfectly. I hate when narrators are boring and this guy is anything but. Highly recommend!

There was a lot of repeating the same sentences within the same paragraph. Difficult to understand transitions between characters. EX: Tom Brady starts talking about Julian, then it immediately switches to something like “I dug my cleats in and made the catch”. I’m sure it makes more sense in the book when you read it to see the separation. This was confusing as a listener and it caused a lot of the repeating.

Excellent narrator. I really enjoyed this one. There were several times that I stayed in my car even after I had pulled into the driveway, just to finish the chapter. Edelman is awesome

This book felt like a movie, one of the best book that I have ever read.

Great underdog story. love the Patriots or hate them, this will give you a perspective of the culture of the organization and hiw Julian beat the odds and silenced his critics.

It’s a must listen to book!

The book is absolutely amazing. I love how he explains what the various plays in detail for the common fan to understand. I have so much respect for Julian after listening to his book. I plan to circle back and listen to it again.

Amazing story.. to motivate anyone. He is the definition of Relentless to reach his dreams

This is a story about am athlete that made the most of every opportunity he ever had. Edelman is one of my favorite people, through his sheer guts and determination. I like the story because it really shapes the foundational relationship between a father and a son. Julian Edelman is the Ultimate person for working as hard as you can to gain everything you can.

The story of a an athlete

As a Patriots fan since 2003, I have been treated to excellence. Coach Belichick is a genius maestro. His game philosophy is par excellence. Edelman is a trophy to sharp scouting and coaching. This book was a treat for the mind.