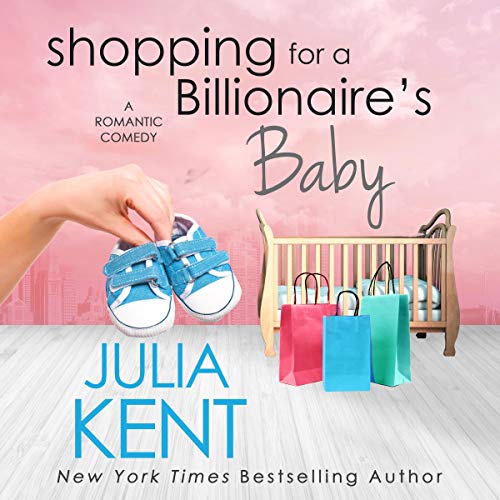 Shopping for a Billionaire's Baby

You know what's even better than marrying a billionaire? Having his baby.

We're ready. We've studied and planned, read all the birth and labor books, researched parenting classes, consulted our schedules, and it's time. And by "we", I mean me. Declan's just ready for the "have lots of sex" part. More than ready.

But there's just one problem: My husband and his brother have this little obsession with competition. And by little, I mean stupid. That's right.

We're not just about to try to bring a new human being into the world. We have to do it better, faster, stronger, harder.

I thought the hardest part about getting pregnant would be dealing with my grandchild-crazed mother, who will go nuts shopping for a billionaire's baby. Wrong.

Between conception issues, my mother's desire to talk to the baby through a hoo-haw cam, a childbirth class led by a drill sergeant and a father-in-law determined to sign the kid up for prep school before Declan even pulls out, my pregnancy has turned out to be one ordeal after the other.

But it's nothing - nothing - compared to the actual birth.

Great to catch up with Shannon & Declan!

This is a light & sweet listen overall! It's funny, with the humor more driven towards sarcasm and some of the developments among the characters, not in the situational comedy of the previous stories. I have found so much joy in seeing Declan & Shannon mature, evolve and become so much the unit that they set out to be and that basically brings me so much joy as a follower of this series. Julia Kent has managed to keep alive so much of what originally made this series so appealing and with the solid narration of Tanya Eby & Zachary Webber one can't go wrong.

Love this whole series, always lovely to catch up with Shannon and the rest of them.
And soon we`ll have a baby making up the perfect little family

One of the best of the series

This was one of the best stories of the whole series. This story was packed full of love, romance, and humor. There were so many parts in the story where I laughed out loud, I could not believe how funny some of the parts of the story were. Some of the best things ever of the story was how romantic Declan was, how wonderful he treated Shannon, the beautiful things he said to Shannon, and overwhelming love he showed her. Of course we had all the other great characters, her family, his family and we could see peeks into who might be getting together in the future. There were all kinds of crazy antics that Shannon and Amanda got into and of course the strangest situations ever that Shannon got stuck in. This was just an amazing story!!!! The narrators were wonderful as always.

OMG! Having a baby...Declan and Shannon style!

ohhhhh, I absolutely LOVED this story!

Tanya and Zachary did an excellent job... as usual!

The level of crazy was the ad expected and really, Julia nailed the trials and tribulations that women go through during pregnancy!

I can't wait for more!

This story is whiny the characters are whiny the female narrator is whiny..... I got this for the great reviews and Zachary Webber. He is the only part of this story I liked. It was a painful listen. I understand that childbirth is hard but this is a fictional book not a documentary.

Much more action, not so ho hum.

hun. was worried this series was getting stale, but I changed my mind with this book. Keep it up. Hoping to get more like this in the future. Great performance and still a fun story. Finally a little payback on someone who deserves it too!

Whenever I’m feeling mopey I turn to this series, you can’t help but laugh out loud, receiving several weird looks from passerby’s , cheers you right up!

Shannon and Declan are about to embark on their biggest adventure yet. The journey to parenthood they take is in true Jacoby fashion with all the craziness that follows Shannon around... even when "it's time". A barrel of laughs, but love is also ever present.
Tanya Eby and Zachary Webber really bring out the best parts in the audiobook.

Julia, this book was filled with tender moments.
I loved the letter Declan wrote to let his
wife know of his love, and happiness over
the baby. When Declan knocked out
the ex for not helping Shannon,
trapped in an elevator and in labor
I cheered. This is definitely a book
I will listen to again.

Such a fun listen!

This was such a fun listen. I was laughing out loud at 2am! I was new to the author but she will be on my list, if her other books are similar. It was a very enjoyable story.